what causes a decrease in velocity?

Let's assume that a car is travelling at a constant velocity (V) on a horizontal flat plane , hence the force of friction is balanced by the force applied by the engine. The power which the engine exerts upon the car is given by the equation $Fengine×V $. Now let's assume that the same car now moves up an incline plane at a constant velocity, with the engine exerting the same amount of power. However since the force exerted by the engine will now increase , the constant velocity at which the car travels up the slope should decrease if the power is to remain constant. Hence I would like an understanding , preferably newtonian as to what caused such a decrease in speed? Aren't the forces balanced , does this not go against newtons first law , since in this case no unbalanced force acted upon the object to cause a change in motion. My intuition tells me that the time which it took the engine to exert a force to balance $Fparrallel$ and $Ffrict$ was the time in which the reduction in velocity took place , but I would like some confirmation .

You're right that the reduction in velocity takes some time. Let me spell out in more words/equations what you seem to already understand!

You're demanding that the power, $P=F_{\text{engine}}v$ is constant. You also have some $F_{\text{friction}}$, the force due to rolling friction, and $F_{\text{gravity}}$, the force pulling the car backwards along its axis of motion due to gravity.

From free body diagrams, $F_{\text{friction}}=\mu g M \cos(\theta)$, where $\theta$ is the angle of the slope, $\mu$ is the coefficient of rolling friction, and $gM$ is the normal force due to gravity. The force of gravity along the direction of motion is $F_{\text{gravity}}=g M \sin(\theta)$.

If the car's velocity is in equilibrium, then we have:

I think you've grasped all this intuitively in fewer words and equations! Obviously if someone is going straight and starts going up a hill without stepping more on the gas pedal, they're going to slow down over time.

There are a lot of assumptions made, however. For example, the relation between $F_{\text{engine}}$ and the power $P$ is probably wrong. You would expect the force that an engine delivers to depend on the velocity, the load placed on it, and all sorts of other things. My point is: this is kind of a weird constraint to put on an engine (for example, it breaks down when the car starts from a standstill and $v=0$). If you're working for BMW then you need a better model, but it suffices to us. We have a description showing that the car has to slow down.

Unfortunately it's harder to figure out how the slow-down happens. There is in fact an unbalanced force, so we have to start plugging stuff into Newton's law $F=ma$. We have to worry about the equation

which is an ugly, ugly thing. It's so ugly because it's nonlinear. The $v$ on the bottom completely screws up any non-calculus based methods you've learned so far (You wind up with an ordinary differential equation of the form $y''(t)=A/y'(t)+B$, where $y''$ is acceleration and $y'$ is velocity). It's easier to resort to numerics to solve it. 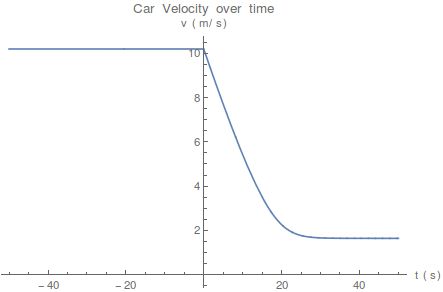 It starts at about ten meters per second and travels along at constant velocity. When it hits the slope, it takes about twenty seconds to slow all the way down to a bit less than two meters per second.

The graph was generated with the following Mathematica code. (Note: HeavisideTheta[t] returns 0 if t<0 and 1 if t>0)

There is an increase in the resistance to motion since now there is a component of the weight acting parallel to the direction of motion of the car. This causes an initial net force downwards which causes a deceleration. The forces balance out once again when the resistive forces decreases to a certain value.

Not the answer you're looking for? Browse other questions tagged newtonian-mechanics work power or ask your own question.

0
Is resistance to motion directly proportional to the speed of a moving object?
0
Question on work, energy and power
2
What does the equation $P=\vec{F}\cdot \vec{v}$ really mean?
0
What does the Force in the equation P=FV represent?
2
What happens to $P = F × v$ for a car moving on a frictionless surface and in vacuum?
0
Why a Box moving at Constant Velocity isn't doing Work?
2
How Much Power Is Required to Hover?
0
Why is Power caused by the driving force