Why do gases conduct at low pressure?

My intuition tells me if gases conduct electricity, it should happen at high pressure, then the atoms will be closer together and electric field can ionize them.

But my textbook says low pressure is favoured for the gas discharge. Doesn't this mean discharge happens more vigorously in a vacuum which is absurd? May I know how low pressure contributes to the discharge?

While your argument that if there are more atoms, more electrons can be obtained through ionization makes sense, you don't account for the fact that only high energy electrons can ionize electrons from the gas atoms. If there are too many gas atoms, the electrons collide much before they have enough kinetic energy to ionize the atoms. If you cannot get a high number of electrons moving, you won't get sufficient current.

When the gas pressure is low (but not too low), the electrons get enough time (or distance) to accelerate. By the time they collide with an atom, they have gained enough kinetic energy from the electric field to ionize other atoms. Even though there are not many atoms from which electrons can be obtained compared to a gas at high pressure, there is more than enough to produce a measurable current.

If the gas pressure goes too low, your argument comes to play. There won't be enough atoms to ionize and the conductivity decreases.

where $V_B$ is the breakdown voltage (minimum voltage required to observe a measurable current), $p$ is the pressure of the gas, $d$ is the distance between the electrodes, $A$ is the saturation ionization of the gas and $\gamma_{se}$ is the secondary electron emission coefficient and $B$ is a constant which is related to the ionization energy. 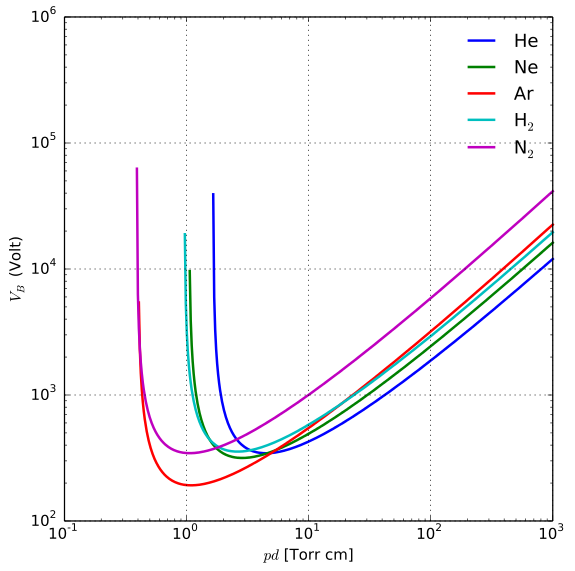 When the pressure is too low, it is difficult to obtain significant number of electrons to produce a measurable current.

For a pressure which is not too low nor too high, how conductivity varies can be understood as follows.

If a free electron was moving through two electrodes with a potential difference of $V$ in a perfect vacuum, the kinetic energy gained by the electron is:

Let the distance between the electrodes be $L$. If the electron travels a distance $x$ (mean free path) before colliding with an atom, the kinetic energy gained by the electron is:

An electron needs to have at least $W$ (let's call this work function) energy to ionize an atom.

If significant ionization must occur, then: $$K.E \ge W$$

The minimum $V$ required to see a observable current is given by:

Not the answer you're looking for? Browse other questions tagged electricity gas or ask your own question.

11
Can Gases conduct Electricity?
5
How electricity, and generating electricity works on the atomic level?
6
Levitating capacitor
3
An Experiment with Dancing particles and Electric current
2
How do $H_2$ lamps work?
0
Understanding the physical meaning and effect of voltage and current being out of sync
2
Why dilute gases do not form crystals at low temperatures?
1
If gases are not ideal at high pressures, why doesn't raising the temperature of a gas make it less ideal?
8
What is the counter-force to suction force?