How is light able to pass through more than one polarizer

I have been having a difficult time understanding the concept of multiple polarizers. Here is an image from my text book which doesn't make sense to me. Light propagating in a plane that makes a 0 degree angle with the polarizer will pass through and all other planes will only pass the component of the vector that is in line with the polarizer. What the image suggests, and other images like the second one, is that the light is now all propagating parallel to a single plane. So how is it that light that has been passed though a polarizing filter and now composed of waves parallel to a single plane able to pass through another filter that is not exactly in line with the first?

Update: After learning quite a bit from this discussion, I wanted to throw this out there: I was thinking of a polarized​ filter as just that, a filter. My understanding of a filter being that it will pass certain "things" through it but not create new "things". If you passing red light through a blue filter, you won't get blue light out because there was no blue light to begin with. It seems like calling a polarizer a filter is slightly misleading. 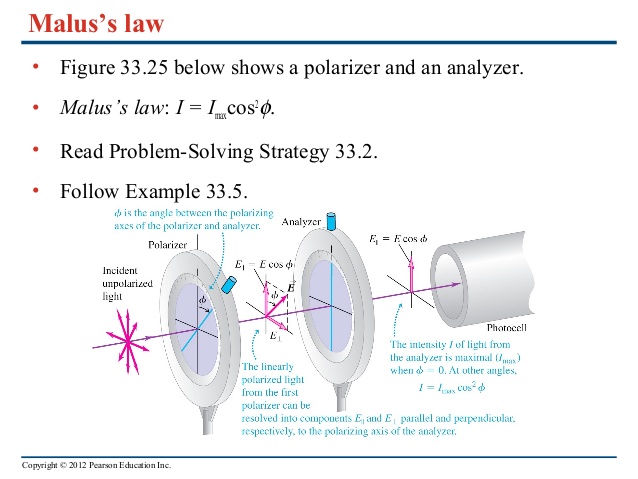 Doesn't have to be "exactly in line with the first". The impossible (probability zero) thing would be for initially-linearly-polarized light to subsequently pass through a (plane) polarizing filter that's orthogonal to the initial plane. Otherwise, if the second polaroid's rotated through an angle $\theta$, photons have the usual $\cos^2\theta$ probability of passing through (being "accepted").

That probability's just $\left|\left\lt\psi|\phi\right\gt\right|^2$, generally speaking. And that'll be zero only when the two (linearly polarized) states are orthogonal.

>>Edit<< attempting to address @AndrewMarzban 's comment below "haven't taken quantum mechanics". However, he apparaently has a mechanical engineering degree.

Okay, so a state, e.g., https://en.wikipedia.org/wiki/Quantum_state , typically labelled $\left|a\right\gt$ or $\left|b\right>$ or $\left|\psi\right>$, etc, is simply a "complete description" of the system/object/whatever under consideration, in this case a "photon". (For our purposes here, "photon" is okay, but that's ultimately an oversimplification of the quantum nature of the E&M field.)

So what does "complete description" mean??? That's still somewhat of a mystery, but an intuitive operational definition might be a reproducible laboratory procedure for the preparation of the system/object/whatever under consideration. In this case that procedure could be starting with any old source of randomly polarized light, and then passing it through your initial polaroid filter.

In addition to "preparations", there are "tests". A prepared system (in this case initially-polarized photon) is subjected to a test apparatus/procedure, which either "accepts" or "rejects" it. In this case, photons from your first polaroid impinge on the second polaroid, and either pass through it or don't.

But all this doesn't get us much of anywhere as far as mathematical calculations, predicting probabilities, etc, is concerned. For that kind of purpose, the theory lets us associate a mathematical_function/"state" with that preparation procedure, which is typically a complex function (of space and time coordinates, and frequently of other stuff), our so-called $\left|\psi\right>$. And then $\left<\psi\right|$ is the notation for its complex conjugate (though this is again somewhat of an oversimplification -- slightly more accurately, but without discussion, $\left|\psi\right>$ is a function in the "state space of the system", and $\left<\psi\right|$ is its corresponding functional). And note that states are normalized so that $\left|\left<\psi|\psi\right>\right|^2=1$.

So now let's re-visit your whole question, which is, from above,...

"So how is it that light that has been passed though a polarizing filter and now composed of waves parallel to a single plane able to pass through another filter that is not exactly in line with the first?"

But let's just slightly rephrase that, using our preceding terminology, as follows: How is it that photons prepared by a $\left|\psi\right>$-preparation procedure can subsequently be accepted by a different $\left|\phi\right>$-test procedure? Yeah, well, one way or another, that's just how it is, and the probability for that to happen is just $\left|\left<\phi|\psi\right>\right|^2$ as previously stated. And for linear photon polarization, that'll be zero if and only if the two polarizing filters are rotated by $90^o$ relative to each other.

That leaves one remaining question: how do you develop the appropriate mathematical expressions representing our polarized photon states $\left|\phi\right>$ and $\left|\psi\right>$? A really, really, really (did I say really?) good discussion of this is the 39-page Chapter 1 (aptly titled "Photon Polarization") of Gordon Baym's almost-classic "Lectures on Quantum Mechanics", https://books.google.com/books?id=1125sVZ2_GcC&pg=PA1 And I mention "39-page" to point out that such a discussion is beyond the scope of a stackexchange discussion. If interested, try reading it, and followup with any specific questions. It's basically a first-year graduate text, but the Chapter 1 discussion is pretty much ab initio, assuming only prerequisite knowledge of some basic undergraduate E&M, which I think you have.

Let's keep it at a simple (classical) level. Consider a beam of intensity $I_0$ incident onto a polariser. There are two laws at work:

where $\theta$ is the angle between the direction of polarisation of the incident light and the axis of the polariser.

So if there are two polarisers, the intensity passing through both reads

Hence, only when $\phi$ is a right angle, will no light pass through both.

Note also that, your diagram suggest that unpolarised light is incident onto the first polariser. So all values of $\theta$ are equi-probable and we should therefore integrate over $\theta$ in this case, from 0 to $2\pi$, therefore getting the following intensity going through both polarisers

Not the answer you're looking for? Browse other questions tagged optics visible-light waves polarization or ask your own question.