Brownian motion in a box

It is often said that the Brownian motion for a particle in a box, thus a finite domain, is described by a uniform probability distribution in the longtime limit. One may easily imagine this maybe intuitively, but is there actually an easy way of showing this? How is it that even though there are boundaries, no bias is introduced in the longtime limit of where the particle may be in the box?

If one assumes the discrete case, so the box is populated with only a finite number of points the Brownian particle can occupy, does the above statement still hold? Please feel free to give references that you see fit for such questions, I imagine these are all solved problems and that's why most people often state them using the adverb trivially. 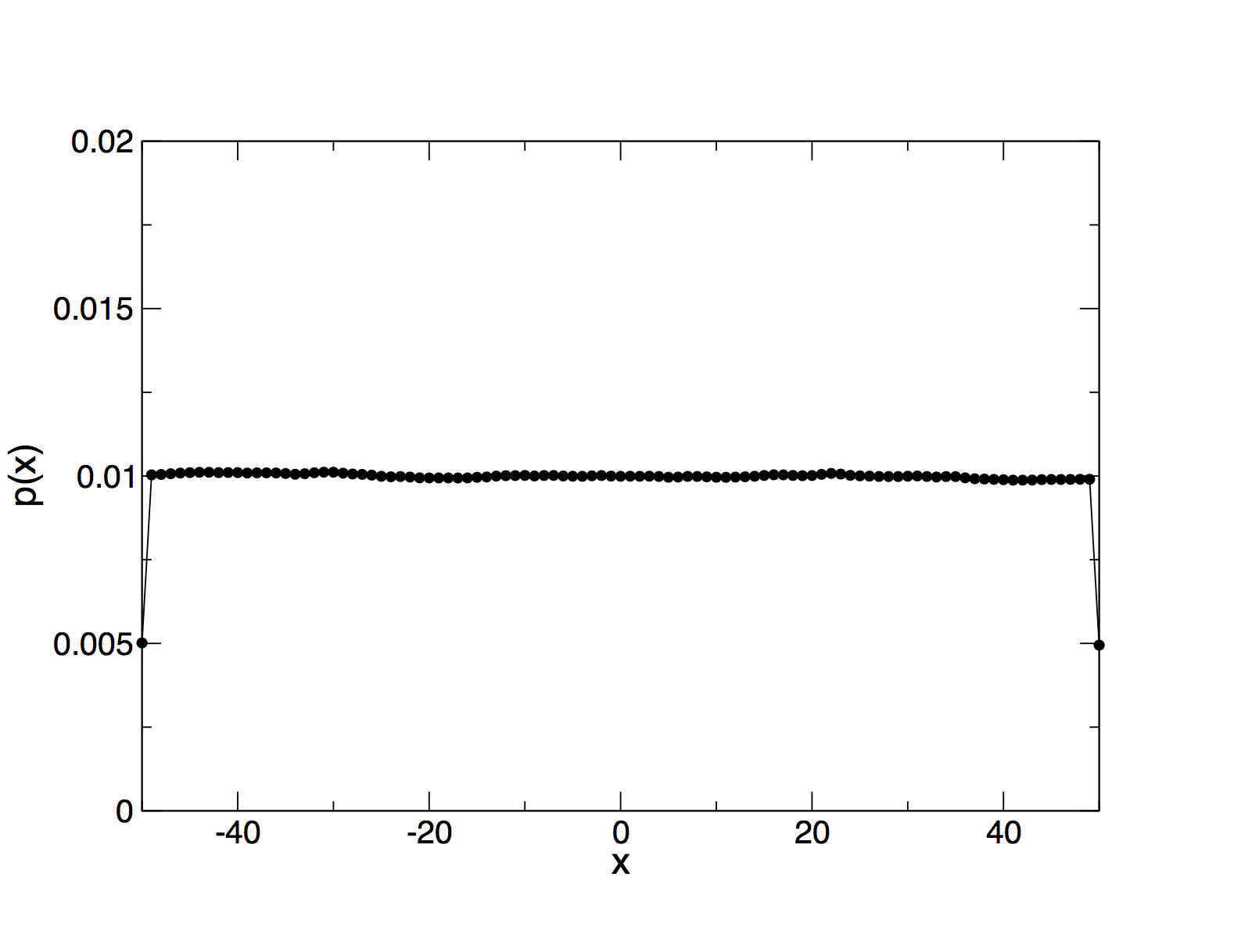 So, it looks like in this simple lattice model the distribution is uniform everywhere except from the very boundaries of the segment, i.e. it is uniform in $(-L,L)$.

I don't know if this still holds in a continuous model, also because it becomes more tricky to do the simulation in this way, because the particle can never really hit the boundary, so it is possible that the result depends on how the boundary conditions are implemented exactly.

This problem is commonly known as reflected brownian motion (RBM). Many articles can be found regarding RBM in open regions (like $[0,\infty)$), but we are more interested in RBM in closed regions.

About this, I found this relevant article:

I suspect there is a natural way to treat the general case, but I will only deal with $1$ boundary condition. Say you are in a the one dimensional box $[-L,L]$, (we will see in a moment that the same argument works in the $n$ dimensional box). Brownian motion has infinitesimal generator equal to $1/2$ times the Laplacian. This is equivalent to saying that if we begin our Brownian motion with probability distribution $\mu$, then for any bounded continuous function $f$, the function $$u_t(x)=E_{\mu}[f(B_t)]=\int f(x) P(B_t=x),$$ solves the equation $\partial_t u=\frac{1}{2} \Delta u.$ The subscript $\mu$ on the expectation means the Brownian motion $B_t$ at time zero has probability distribution $\mu$, it may be simplest to think of $\mu$ being a delta function.

Now intuitively we would like to set $f(x)=\delta(y-x)$ so that $$u_t(x)=E_{\mu}[\delta(y-x)]=P(B_t=y),$$ is approaching a constant quickly. This would allow us to conclude that the distribution of a brownian motion approaches the uniform distribution regardless of its initial distribution $\mu$. Unfortunately a delta function is not bounded and continuous, so we can't do this directly but we can approximate the delta function arbitrarily well by a bounded continuous function and thus get arbitrarily good approximations of $P(B_t=y)$ which converge to a constant independent of $y$.

Let's examine the one dimensional case to understand this. We will set up a probability equation for where the particle is, and then take the continuum limit in both time and space. The result will be a familiar friend.

Consider a box of length $L$ divided into $N$ bins. Assume that a particle starts off close to the center of the box, and in each timestep has an equal probability of jumping to the right or to the left, $\alpha\Delta t\le .5$. Note that this is proportional to $\Delta t$, so $\alpha$ is a transition rate. The probability that it stays in the same bin is then $1-2\alpha\Delta t$.

One can then use Bayes' rule to calculate the probability that the particle is in the $n^{th}$ bin at time $t+\Delta t$:

This procedure is the same for higher dimensions. Things get complicated if you choose to include interactions between particles. That, however, isa story for another day.

I think the distribution remains flat for diffusion in a box, unless the boundary conditions are really strange or unphysical. Let me try with this not-so-accurate argument. Free diffusion gives a probability distribution which starts at $t=0$, for a single particle, as a delta function centered at the initial position, and evolves as a Gaussian $G_{free}$ with a variance that grows linearly in time.

Now, if you have a box around the particle, I'd say that the probability distribution $G_{box}$ at a time $t$ will be some sort of "folded" version of the Gaussian $G_{free}$ (with the tails of $G_{free}$ i)folded back for reflective boundary conditions, or ii) copied and pasted on the on the side for periodic boundary conditions, or iii) just removed for sticky boundaries iv)... ). This can create a strange $G_{box}$ at finite times, but eventually in the long run everything will be smoothed out and $G_{box}$ will become flat.

(On the other hand, if your box is not a rigid box but a harmonic potential well (the particle feels a force linear with displacement from the center), then $G_{box}$ will remain always the same Gaussian.)

Not the answer you're looking for? Browse other questions tagged statistical-mechanics brownian-motion or ask your own question.

6
Is there a modern iteration of Einstein's Brownian motion theory?