Snell's Law: $$\frac{\sin(\theta_1)}{\sin(\theta_2)}=\frac{n_2}{n_1}$$ I have read some explanation on understanding complex Snell's Law like Explanation of sin(theta) > 1 for total internal reflection, but still have questions on concrete examples. So I want to list my questions here by calculating a simple examples.

Snell's law in its sine-over-sine form is not the best tool to handle situations that involve incidence angles above the critical angle, and the complex angles that you're getting will only lead you astray.

If this is the case, it's not actually a problem: you just write $k_{z,\mathrm{tr}} = i\kappa_z$, and it gives you a perfectly workable 'transmitted' field, of the form $$ \mathbf E_\mathrm{tr}(\mathbf r,t) = \mathrm{Re}\mathopen{}\left( \mathbf E_{0,\mathrm{tr}} e^{-\kappa_{z} z}e^{i(k_x x- \omega t)}\right)\mathclose{}, $$ where what used to be an oscillatory $e^{ik_z z}$ has turned into the decaying exponential $e^{-\kappa_{z} z}$: this is the evanescent wave, which is the decaying trace of the light that's been unable to make it past the boundary, but which cannot drop discontinuously to zero.

Similarly, if you have a complex index of refraction, it means that your medium absorbs light, and there you have no alternative but to use explicit exponential decays in your description of the beams: if $n$ is complex, then the wavevector still needs to satisfy $$k^2 = n^2\omega^2,$$ which means that it too will be complex, and you'll have a decaying field in that medium.

That said, you do have a good point that when the second medium has a nonzero absorbance, it is no longer easy to distinguish between the 'sub-critical' incidence angles and over-critical cases with total internal reflection - and indeed there is no longer any case with full reflection of the incident power, since the transmitted wave always has a nonzero $\mathrm{Re}(k_z)$ and therefore always carries up some amount of power away from the boundary.

The way to analyze this in a way that will bring out the relevant behaviour is to plot the wavevector component $k_z$ in the complex plane as the angle of incidence is shifted from $0$ to $\pi/2$. If $n_2$ is real, then $k_z$ will be real at normal incidence, it will approach the origin as $\theta_\mathrm{in}$ increases, and once it reaches the origin it will advance back up along the imaginary axis.

If $n_2$ has a nonzero imaginary part, though, then $k_z$ will follow a similar path but it will be detached: off with a nonzero imaginary part before reaching the origin, and then up the imaginary axis but with a positive real part. The image below shows this behaviour, tracking $k_z$ for $\theta_\mathrm{in}$ between $0$ and $\pi/2$, and with $n_2$ between $2$ (dark blue) to $2+i$ (light blue). 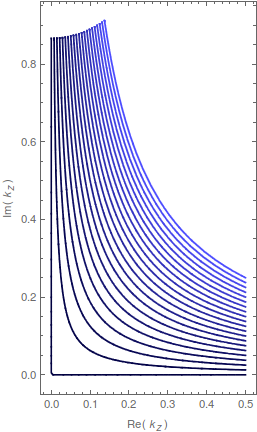 As you can see, if $\mathrm{Im}(n_2)$ is very small (which it is in real materials), then you can define the critical angle as the 'kink' when $k_z$ is close to the origin. However, as that imaginary part increases, the concept of critical angle simply makes less and less sense: you just have a decaying wave away from the boundary, and the incidence angle has very little effect on how fast that wave decays. It mostly stops being a useful concept to begin with, so it doesn't make a lot of sense to dig deep into the mathematics to look for a precise definition of it in that regime.

Not the answer you're looking for? Browse other questions tagged optics refraction geometric-optics complex-numbers or ask your own question.