Why is that a system with a concave-up entropy-energy graph cannot have a stable thermal equilibrium? 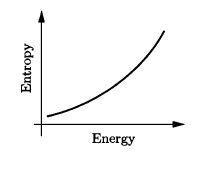 This is from Schroeder's An Introduction to Thermal Physics:

Let A and B be a system both with a concave-up entropy-energy graph. The systems will achieve thermal equilibrium when they are at the same temperature. Usually, however, the equilibrium will not be stable. Any small flow of energy from B to A will cause the temperature of B to increase while the temperature of A decreases. We then get a run-away effect, as more and more energy spontaneously flows from B to A. And if the initial fluctuation results in energy flowing from A to B, the run-away effect goes in the opposite direction.

If B is a large "reservoir" whose temperature doesn't change significantly when it absorbs or emits energy, then again any small transfer of energy from B to A will result in A becoming colder than B so we get a run-away effect. The only way for the equilibrium to be stable is if system B is "normal" and sufficiently small (more precisely, has a sufficiently small heat capacity) that a spontaneous transfer of energy from B to A causes B to cool off more than A does. Then A will become a bit hotter than B and the energy will spontaneously flow back.

The curve shown in the picture has the property

Let's say that B and A are initially at the same temperature, and that a fluctuation makes a quantity $\delta Q$ of heat flow from B to A.

You can see how this process creates a positive feedback that results in B becoming hotter and hotter (while losing energy) and A become colder and colder (while gaining energy), while the heat flux grows without bounds (1).

Since we don't observe such an unusual behavior, we must conclude that most of the thermodynamic systems we observe have the opposite property, i.e.

(1) Eventually (and ideally), A will reach absolute zero, corresponding to its state of maximum energy, and the process will have to stop, because A cannot take any energy any more. But I am not sure about this last point, since funny things happen when we are close to absolute zero...

Thus, if the concavity of S vs U were positive then the temperature must diminish with an increase in internal energy. That is why, in general, the concavity is negative.

Not the answer you're looking for? Browse other questions tagged thermodynamics temperature entropy equilibrium stability or ask your own question.

23
Why does maximal entropy imply equilibrium?
4
Definitions in thermodynamics: temperature, thermal equilibrium, heat
3
Thermodynamic equilibrium of an isolated system
96
Where is the flaw in this machine that decreases the entropy of a closed system?
3
If the fundamental definition of thermal equilibrium is no net heat transfer, how does one derive that temperatures must be equal?
0
What are the exact conditions under which one can say for sure that the entropy of a system will increase?
1
Why does taking work from a system not reduce its entropy?
0
Local equilibrium of slow time varying thermal system
2
Why does energy flow downhill/entropy increase?