Is it possible to have stable orbits around Lagrange point $L_1$?

Is it possible to have stable orbits around Lagrange point $L_1$?

If yes, is there an upper limit to the mass of a body on such an orbit?

As Sean wrote, the closest you can come with are so-called halo orbits. I then read in-depth the most recent paper cited on the Wikipedia page Sean quoted, that is Howell (1984), and I found something interesting: there is a tiny band of stable halo orbits! But they can't be called orbits about the $L_1$ point by any stretch of the wording. Let me explain, with pictures taken from Howell (1984).

Axes: Howell use the traditional frame of reference centred on the centre of gravity of the Sun-planet system, with the X axis pointing from the Sun toward the planet, the Y axis in the ecliptic plane (reminder: the plane in which the orbit of the planet about the Sun lies). The Z axis is then, obviously, perpendicular to the ecliptic plane.

Initial conditions: Howell considers a starting location in the XZ plane and a starting velocity in the Y direction.

Now is pictures time! Howell gives the projection of the trajectories on the XZ plane, the XY plane and the YZ plane. Here they are, with the position of the $L_1$ point and of the planet marked (the latter with its mass $m_2$). If you wonder about the units, they are some fancy ones but it's not relevant as the relevant positions are marked. 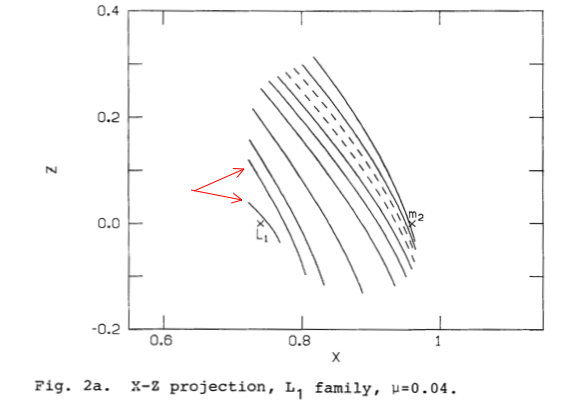 … which corresponds to the two orbits on which I have drawn red rectangles (if I understand correctly!). 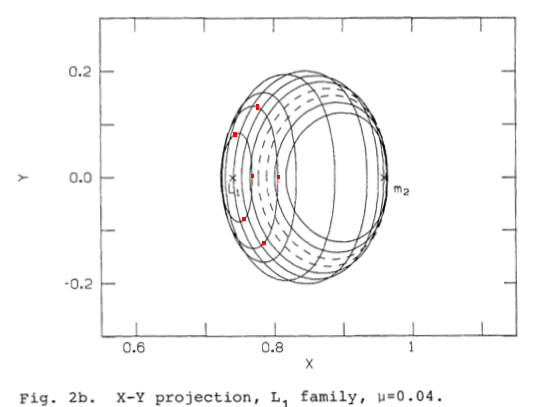 Then $L_1$ does not appear on the following YZ diagram because it is hidden behind $m_2$. 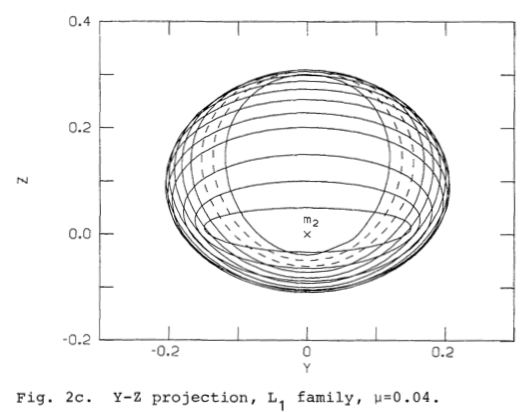 The interesting piece of information here are the dashed orbits: they are the only stable ones. The orbits I highlighted would clearly qualify as "orbits about the $L_1$ point", as they stay in the vicinity of that point. The stable orbits on the contrary do not pass that intuitive criterion. On the XZ projection, we see that the body on this trajectories come close to the planet and then it wanders far away from the ecliptic plane, before coming back of course, as those are periodic solutions. On the XY projections, we can see how little time that body spends above the line planet-$L_1$. And when it is there, it is actually at the farthest from the ecliptic plane as shown on the $XZ$ projection. Conversely, when the body gets on the ecliptic plane, it is at its farthest from $L_1$!

To reiterate what Sean wrote, what does it mean that the orbit I highlighted are not stable? It means that the slightest perturbation pushing the body on those orbits either toward the Sun, or toward the planet, would result in the body wandering away from the $L_1$ point and get in orbit either about the Sun, or about the planet, respectively. So since the speed in the YZ plane can't be instantly killed, this means, I think, that, initially, the body would first follow some kind of screw either toward the increasing-X or the decreasing X direction.

The only way to use those unstable orbits, as Sean wrote, is by actively counter-acting any perturbation pushing along the X axis, by using the thrust of rocket engines for example, or more fancy with solar sails taking advantage of the radiation pressure of sunlight. I haven't investigated how serious it is but a publication by Roger Angel considers using that principle to maintain a swarm of spacecrafts about the $L_1$ point so as to compensate for global warming(?!).

It should be noted that Howell (1984) presents analyses for the $L_2$ and $L_3$ points as well with similar conclusions.

Conclusion for the project you presented in your former question, Maxwell: there is really no way to use the $L_1$ point to place a big moon to shade the planet from the Sun!

No. The Lagrange points L1 through 3 are stable to displacements perpendicular to the, say, Earth-Sun line. That is why they have things described as "halo" orbits. If you move off the point along the line, though, you'll fall into an orbit around the body you moved closer to. This limitation is what limits the lifetime of the JWST mission - the need for fuel to keep near the Lagrange point.

The stable Lagrange points are L4 and 5. Notice how the Jupiter/Sun L4 and L5 are where the Jupiter Trojan and Greek asteroids accumulate. The stability of L4 and 5 are a little odd, inasmuch as objects that move off of them enter a Lissajous orbit around them. 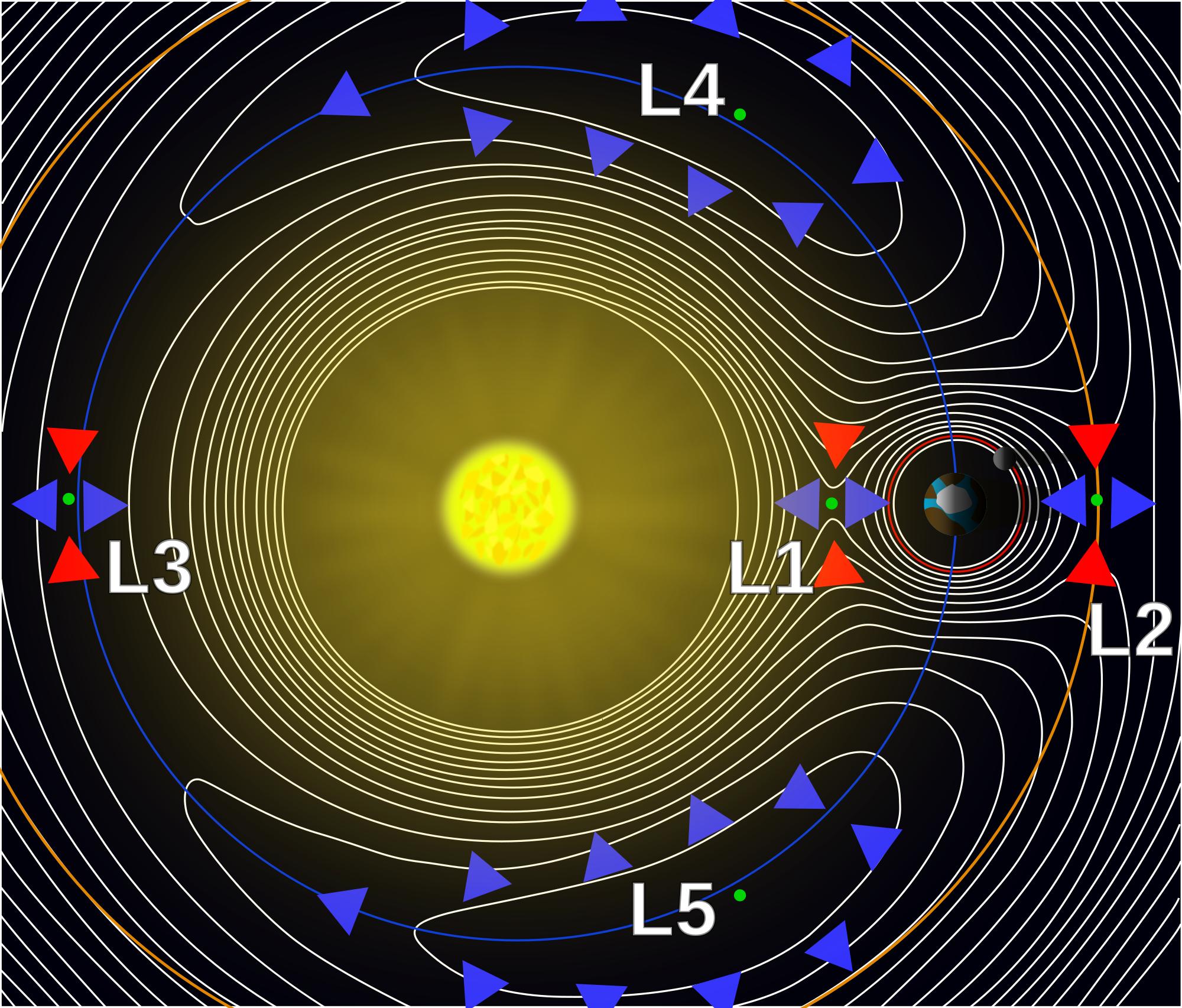 Not the answer you're looking for? Browse other questions tagged newtonian-mechanics newtonian-gravity orbital-motion celestial-mechanics stability or ask your own question.

-2
Help figure out the planet M