Minimum number of charges in an oscillatory system

I was just curious actually.

Is it possible to release a set of point-sized charges in space, each particle at rest, such that after a period of time, the system returns to its initial configuration of positions. The particles can have unequal masses and charges.

(Newton's laws and Coulumb's law apply, relativity doesn't. Induction of charge does not occur, charges cannot touch each other in a valid example)

It looked easy at first, but I couldn't find any example of the same. Can the statement be disproved, maybe using Gauss law and unstable equilibrium?

P.S. If it is possible, what is the minimum number of charges required to achieve this?

P.S.2 @rpfphysics has noted that the question is trivial if we allow charges to pass through each other. Hence I'm asking for examples where they do not.

Before working on a general condition for this, (which is a harder question), I can show this problem has answers if we involve 3 charges (at least 3 charges, since two charges released at rest will not behave periodic).

So the way I want to show this is not to mathematically drive path equations for charges and show that they behave periodically (though that would be an ideal answer and I'll work on it).

Instead, for now, I used a computer simulation to show that this is possible. Back in my high school days I made a simulation program in which one could play with charges and learn high school electrostatics.

You can download the program here if you want, however note that it's just a student project so you will find a lot of bugs. Plus, it is not English so you might sometimes need to use your sixth sense.

Here's the video simulation of three charges which are released at rest, and they behave periodically so, yes, the problem has answers. Just check out this video:

Each particle is 100 grams.

The trace image of the system roughly looks like this: 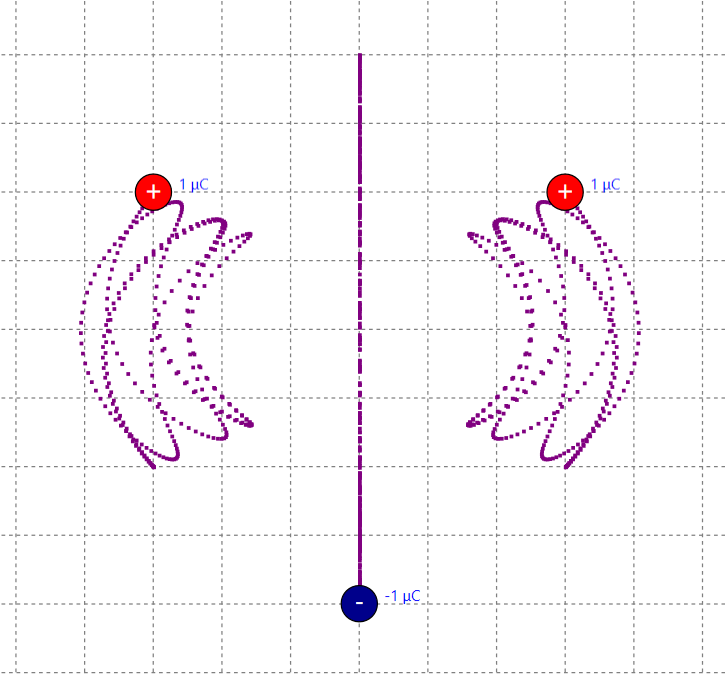 (It is barely notable that this image corresponds to a slightly different config. of charges than the animated image above)

Not the answer you're looking for? Browse other questions tagged newtonian-mechanics electrostatics electric-fields coulombs-law equilibrium or ask your own question.

52
Can we infer the existence of periodic solutions to the three-body problem from numerical evidence?

1
Parallel-plate capacitor
4
Neutral points in a system of charges on the vertices of a square
1
Induced charge in a conductor
0
Electric Potential: Building system of point charges
1
How can system of charges be static?
1
Is an infinite set of positive and negative charges next to each other $... - + - + ...$ a position of equilibrium?
0
Does the same point continue to be the neutral point when the system of charges start to move closer or away?