How do I integrate the Poisson equation to determine the electric potential along a particular direction (e.g., $z$)?

This question is a sequel of sorts to my earlier (resolved) question about a recent paper. In the paper, the authors performed molecular dynamics (MD) simulations of parallel-plate supercapacitors, in which liquid resides between the parallel-plate electrodes. The system has a "slab" geometry, so the authors are only interested in variations of the liquid structure along the $z$ direction.

Recall that in CGS (Gaussian) units, the Poisson equation is

Now suppose I want to find the potential $\Phi(z)$ along $z$, by integrating the Poisson equation. How can I do this?

The authors then integrate the Poisson equation to obtain $\Phi(z)$:

Thanks for your time.

I don't know your level of knowledge, so let me start with the very basic fact that the electric field of a uniformly charged plate is $$ E=2\pi\sigma,\qquad\left( 1\right) $$ where $\sigma$ is the surface charge density. To derive this result you can utilize the Gauss formula: $$ \Phi=4\pi Q,\qquad\left( 2\right) $$ where $\Phi$ is the total flux of the electric field through a closed surface and $Q$ is the total charge in a space bounded by the surface. In the figure below I depicted charged plate as a blue plane and the closed surface as the box with green sides. 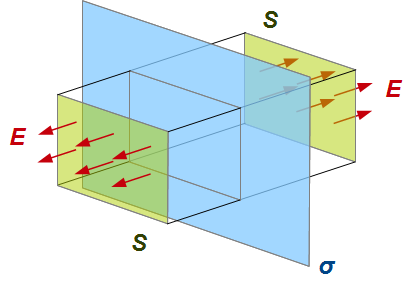 The flux is only non zero for these green rectangles $\Phi=2ES$, where $S$ is the area of the rectangles. The total charge inside the box is $Q=S\sigma$ hence $$ 2ES=4\pi S\sigma\quad\Rightarrow\quad E=2\pi\sigma. $$ 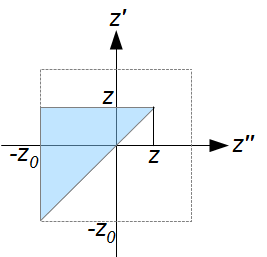 II) Similarly, eq. (2) must be for the $xy$-averaged potential

This is consistent with the Poisson equation

if there is no net electric flux going through the $4$ walls of the box that are parallel to the $z$-directions.

Not the answer you're looking for? Browse other questions tagged electrostatics physical-chemistry simulations computational-physics or ask your own question.

1
How do I use a charge density to calculate an electric field (e.g. $\nabla \cdot\vec E = \frac{\rho}{\epsilon_0}$)?
5
In condensed matter simulations, how is particle number density computed in practice?

5
In condensed matter simulations, how is particle number density computed in practice?
2
Integrating Poisson Equation over two different regions knowing only two boundary conditions for the potentials
1
Application of the Poisson equation on a parametric surface
3
Potential of an infinite charged plate: Poisson's or Laplace's equation?
0
Computation of the electric potential of a point charge with Dirac delta
0
Non-uniqueness of charge distribution in the Poisson equation