Measuring Earth rotation rate about its axis with gyroscopes

With gyroscopes having two basic properties, precession and rigidity in space, shouldn't we see an apparent movement (due to rigidity in space) of a gyroscope's rotor (gimbals) in relation to the earth's rotation?

I am fully aware of the inner workings of an aircraft's mechanical standby attitude indicator's auto erection system (for those that have it). This question would be pertaining to a precision mechanical gyroscope with an electrically driven rotor on your kitchen table with no such correction mechanisms in place.

I understand most gyroscopes have a measurable drift rate but remember that the earth rotates 360 degrees per 24 hours (15 degrees per hour). Shouldn't this apparent movement be noticeable to the observer?

Note: Rigidity is Space is independent of "Gravity". (You can find video on YouTube of a gyro maintaining its orientation in a zero G environment.)

For an observer at the surface of the Earth, the Coriolis force would be responsible of moving the gyroscope axis of rotation. It is well-known that this force is weak on small system, by which I mean it is easily overwhelmed by non-inertial forces such as friction, viscosity, etc. This is why Foucault pendulums have to be sizeable (the smallest I am aware of has a string about 5 meters long). Thus I reckon you would need a gyroscope way bigger than the mass-produced ones. I am not aware of any purpose-built gyroscope to test Coriolis forces. But why would anybody bother when it is so much easier to build a Foucault pendulum?

Mechanical gyroscopes have been completely replaced by laser ones in all inertial system of planes, rockets, etc. They are based on the optical brother of the Coriolis force, called the Sagnac effect. The principle is rather simple and can be demonstrated on the following simple sketch (kudos to Krishnavedala on Wikipedia: I just converted the image to PNG) 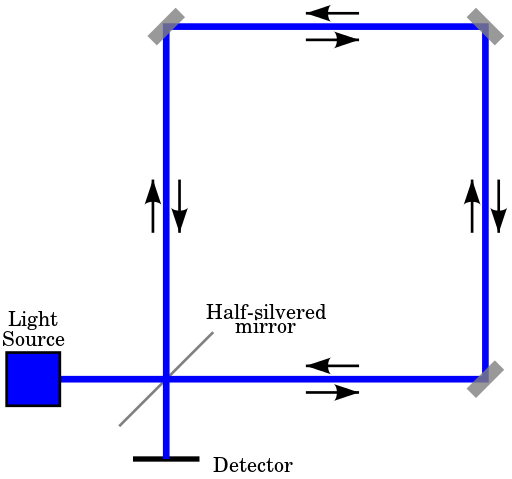 So a light source (nowadays a laser) sends two beams across the optical loop (the beam is reflected by the mirrors, represented by the grey rectangles): one in one direction and the other one in the other direction. Then the two beams meet at the detectors, which just records a shift $\Delta$ of interference fringes between them. This difference is equal to

where $A$ is the area enclosed by the loop, $\lambda$ is the wavelength of the light, $c$ is the speed of light in vacuum, $\omega$ is the angular velocity of Earth, and $\phi$ is the latitude.

So again, the effects is bigger for a bigger detector, and commercially available laser gyroscope have a size of the order of 10 cm, and that gives a fringe shift several orders of magnitude too small to be measurable.

But the experience has been done with a very large ring, whose perimeter was about 2 km (or 1.2 miles), by Michelson, Gale and Pearson in 1925 (the Michelson of the other famous experiment). The measured shift was 230 parts in 1000 for an accuracy of 5 parts in 1000, as compared to a predicted shift of 237 parts in 1000, with the above formula. So clearly Michelson et al did measure the rotation of Earth. The Wikipedia article has more details, including the references to the three original papers of Michelson et al.

With the advent of lasers, and modern instrumentations, the precision of laser rings has vastly increased, for much smaller rings. For example the C-I ring in Christchurch, New Zealand, has a perimeter of only 3.477 m but it has a sensitivity limit of 20 microarcs per seconds for a collection time of one hour. The Christchurch team (website) wrote a nice paper describing not only all their wonderful devices but also giving an in-depth historical, theoretical and experimental review of laser rings [a].

Fibre-optic gyros have proved useful in a very wide variety of fields, such as oil prospecting. The Sagnac signal generated by the Earth’s rotation is sensitive to the orientation of the device, and if the orientation is defined by the ring laser being totally embedded in an oil-well drill bit, the alignment of exploratory bores can be monitored deep underground. Thanks to advanced technological tricks including dither, such small gyros monitor the projection of the Earth’s rotation to an accuracy of $0.01^\circ h^{−1}$ or $5\times10^{−8} rad s^{−1}$, a fraction $7 \times 10^{−4}$ of the Earth’s rotation rate $\Omega_E$ (Kim and Shaw 1986).

The given reference is [b].

[a] G E Stedman, Ring-laser tests of fundamental physics and geophysics, Reports on Progress in Physics 60 (1997), 615

"In 1851 Léon Foucault ﬁrst described his famous pendulum experiment in the Comptes rendus [1]. As he explains in his report, the principle is easy to understand at the pole: by inertia the plane of oscillation remains constant with respect to an inertial reference frame, so that in a sidereal day (23 h 56 min) it rotates or veers through a full 360◦with respect to the Earth, in the opposite direction. Foucault checked that the rotation of the support has indeed negligible effect on the plane of rotation. He was inspired by the observation of a thin ﬂexible rod on the axis of a lathe, which keeps oscillating in a constant plane in spite of the rotation of its support. The problem is more complicated at lower latitude, but Foucault rightly convinced himself that the angular speed of the veering of the swing plane should be proportional to the sine of the latitude. This point was, however, puzzling, and in his paper Foucault draws the attention of “géomètres” (as mathematicians were called at that time) to solve the problem in a more rigorous way..."

Regarding the aforementioned Michelson, Gale and Pearson experiment in 1925, this commentary (below) appears on the flat earth society wikisite. The analysis by Dr. Paulo Correa and Alexandra Correa can be found at www.aetherometry.com/publications/direct/AToS/AS3-I.2.pdf. These scientists stated that the Michelson Gale Pearson experiment was inconclusive since the test results varied wildly.

From a work titled The Sagnac and Michelson-Gale-Pearson Experiments (Archive) by Dr. Paulo N. Correa we read on p.5:

“ The outcome of the MGP experiment was ambiguous, though maybe no more ambiguous than the small persistent positive shift observed in MM experiments. Composed of 269 separate tests with readings that varied from -0.04 to +0.55 of a fringe, and a mean at +0.26 fringes, the MGP experiment could be interpreted to yield a positive result of ≈ 0.3 km/s - therefore near the speed of the earth's rotation, but the result was of borderline significance. It could be said that the experiment was inconclusive because it adduced neither proof that there was a shift in the phase of the light beams, nor that there wasn't one. ”

Essentially the tests saw wild results. There was almost no change to light's velocity in one test, and then a lot of change in another test. It is perplexing that the rotation of the earth would start and stop when tested at different times. Only through the statistics was it claimed that the experiment saw the rotation of the earth. As stated above, the inconsistent results were ambiguous in nature and could offer no evidence of the shift in the phase of the light beams. "

Not the answer you're looking for? Browse other questions tagged rotational-dynamics reference-frames earth gyroscopes or ask your own question.