I understand how to derive this result mathematically. But now let us assume $B$ is directed in $z$-direction, while $E$ is directed along the $y$-axis. Without the $E$-field the trajectory would simply be a circle. Thus, I find it rather astounding that a constant force in $y$-direction produces a motion in $x$-direction which has a constant velocity and is not linearly increasing. Is there an intuitive way to explain this behaviour?

Charged particle in magnetic field moves in a circle, which radius is inversely proportional to the particle velocity. What occur in additional electric field?

Finally, we get the spiraling trajectory with alternating radius of curvature. We can also note that:

1) At the bottom parts of the trajectory (near the points like $A$ and $C$) where the particle moves to the left, its velocity is lower by magnitude, so the motion to the left is suppressed in comparison to that to the right. Thus the average particle motion is to the right.

2) There is a symmetry between the trajectory sections $AB$ and $CB$ (the time reversed version of $BC$): they both start with the same initial velocity magnitudes and are just horizontally flipped. Due to this symmetry the particle accelerates at $AB$ by the same amount as decelerates at $BC$, thus the mean drift speed is constant.

The motion of a positively charged particle under this arrangements of fields is a cycloid.

Assume the simplest case where the charge starts from rest at the origin and the fields are $B\hat z$ and $E \hat y$.

You said that you have solved the problem and what you get is:

I quite agree that the motion is unexpected especially as you have an electric field which is acting in the y-direction which is constantly accelerating the charge it that direction.

However what you have perhaps missed is the fact that as the charge moves faster the force due to the magnetic field gets larger and is always at right angles to the direction of motion of the charge.

So the trajectory of the charge looks something like this. 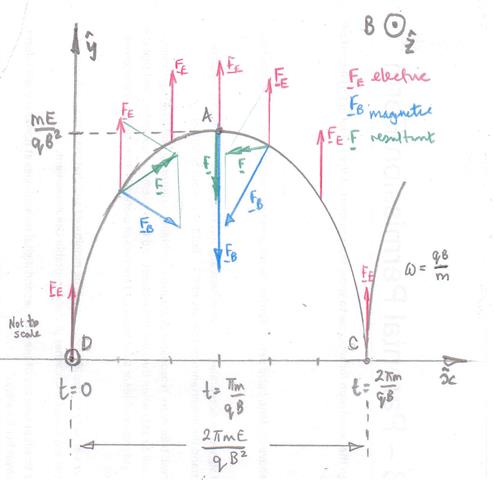 The work done by the electric field in moving the particle from position $D$ to position $A$ is $qE\, \dfrac {mE}{qB^2}$ (the magnetic force is always at right angle to the velocity of the charge) and you can show that this is equal to the kinetic energy of the charge at this position $\dfrac 12 m v_{\rm x}^2$.

In my mind the most elegant explanation is to imagine viewing the motion from a moving reference frame. If you have an observer moving with the velocity you calculated, $\vec{v}_E$, then that observer will see the charged particle moving in a circle. Likewise, take a particle moving in a circle in a magnetic field and imagine what it looks like to an observer moving with velocity $-\vec{v}_E$. To that observer, it looks like the charge is moving under the influence of a crossed $\vec{E}$ and $\vec{B}$ field.

What's going on here? The electric and magnetic fields are mixed up by changes to different reference frames. The conserved quantity is $\vec{E}^2 - c^2 \vec{B}^2$ (SI units), so if the magnitude of $\vec{E}$ is greater than the magnitude of $c\vec{B}$ there exists a reference frame in which there is no magnetic field, and vice versa. The cycloid/drift velocity case is only what happens in the $c|\vec{B}| > |\vec{E}|$ case.

For intuition I would like to simplify the continuous circular motion piecewise into four sides of a square:

The way I understand it, this is because of the gyration motion. The total motion is the motion of the center of gyration, moving with the drift velocity $v_E$ along the $x$-axis, while the actual particle rotates around this (moving) center. This means that it accelerates forward on one half of the trajectory, and backward on the other half. This gives you no net acceleration.

Not the answer you're looking for? Browse other questions tagged electromagnetism plasma-physics or ask your own question.

4
$E\times B$ drift of a single particle in vacuum with unifiorm $E$ and $B$
2
Relativistic Lorentz Force with constant, perpendiuclar, and uniform E and B fields
7
Motion in a time-dependent uniform magnetic field
0
Counter-propagating waves
0
Momentum Conservation when particle enters magnetic field