Can it be argued qualitatively that the ground state of a bound energy spectrum has zero nodes?

I am taking a 1-D system with a general potential $V(x)$ that results in a spectrum of bound energy eigenvalues. Without resorting to specific cases (such as the harmonic oscillator), how do you prove that the ground state is non-zero everywhere on the real axis? How do I prove this just from the postulates of Quantum Mechanics and the definition of a bound state?

"Qualitatively". So you want something less Courant-Hilbert and more seat-of-the-pants than the generic Sturm-Liouville analysis summarized in Messiah vI, Ch III, sec II.8,12.

I'll just outline a less specific/restrictive version of the Wikipedia proof, basically the Feynman-certified one of Appendix A, p 81-82, of M Cohen's 1956 Caltech PhD dissertation.

Without loss of generality, take the bound states to be real; and see that a state with a node at, say, x=0, so ψ(0)=0, cannot be the ground state, as its variational energy can always be lowered. That is, $$ \langle E\rangle=\int dx \left ( \frac{\hbar^2}{2m} \left (\frac{d\psi}{dx}\right )^2 +\psi^2 V(x) \right) $$ is larger than the corresponding one for some continuous deformation φ of ψ which lacks a node, so ψ is not the ground state, after all.

You manufacture φ to equal |ψ|, except in a symmetric region [–ε,ε] around x=0, in which we take it, instead, to be, e.g., ψ(x)=ε, suitably normalized. (The WP choice. You could make the choice smoother at the edges of the interval by more elaborate choices, without significant differences.) 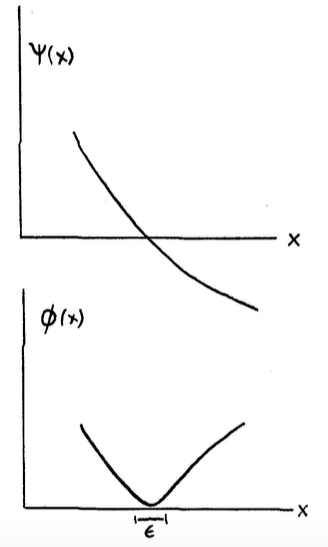 You may then readily convince yourself that, whatever the slope of ψ through 0, the normalization of φ will exceed that of ψ by $O(\epsilon^3)$.

$\langle V\rangle$, however, changes by $O(\epsilon^3)$, so its contribution is subdominant, so, then, ignorable. Since $\langle E\rangle$ is lowered by $O(\epsilon)$, your nodeful ψ cannot be the ground state. In practice, the nodeless φ may be deformed further to a smoothest form avoiding energetically expensive undulations.

Not the answer you're looking for? Browse other questions tagged quantum-mechanics wavefunction schroedinger-equation or ask your own question.