Two ways, different result: Find torque due to magnetic force on a conductor 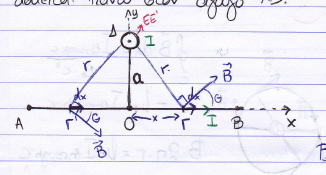 I tried a different way myself. I integrated to find the force for half the conductor and considered that it's exerted at the middle point between 0 and L(this might be wrong). Then to find torque: $T=F\cdot 2\frac{L}{2}=FL$ since the forces are couples I multiplied by 2. However, this gave me something different (integrating F instead of T) $$T=\frac{μ_0\cdot I\cdot I'}{4π}\cdot ln(L^2+a^2)\cdot L$$ What led to a wrong result?

Browse other questions tagged homework-and-exercises electromagnetism magnetostatics or ask your own question.