Just before I explain my problem, please note that all I am looking for is for someone to point out where I got it wrong. Don't downvote this post because my reasoning is wrong - I know it is wrong, and I want to know why.

So, we have a source and an observer, moving away from each other at velocity $v$, with the source constantly emitting light in the observer's direction. In the source's frame of reference, the distance between two light wavefronts is $λ$, and the frequency is $f=\frac{c}{λ}$. In the same reference frame, the observer will receive the light signals separated by the distance $λ+vτ$, where $τ=\frac{1}{f}$. However, due to length contraction, the observer will think the source is underestimating the length of $λ$, and so, in the observer's frame of reference, the wavefronts are separated by $\frac{λ+vτ}{γ}$, with $γ$ the Lorentz Factor. The observer's frequency of light in the observer's reference frame, then, is simply $f'=\frac{γc}{λ+vτ}$ Furthermore, $τ$ is $\frac{λ}{c}$, and $f=\frac{c}{λ}$, so $f'=\frac{γ}{τ+βτ}=\frac{γf}{1+β}$, $β$ being $v/c$. Recalling the Lorentz Factor equals to $\frac{1}{\sqrt{1-β^2}}$, this gives: $f'=\frac{1}{(1-β)^\frac{1}{2}(1+β)^\frac{3}{2}}$, which obviously isn't right. Can someone tell me what is the mistake that I have done?

For concreteness (and so that we can more easily compute and visualize quantities), let's analyze from a frame where the source is at rest and the receiver moves with velocity $v=(3/5)c$.
Further, let the source period be $\tau=10$
and so (in units where $c=1$) the source wavelength is $\lambda=c\tau=10$.

Let's visualize this on a spacetime diagram on drawn on rotated graph paper.

I will address specifics of your approach after the diagram. But first, I will make an important comment on wavelengths and length-contraction. 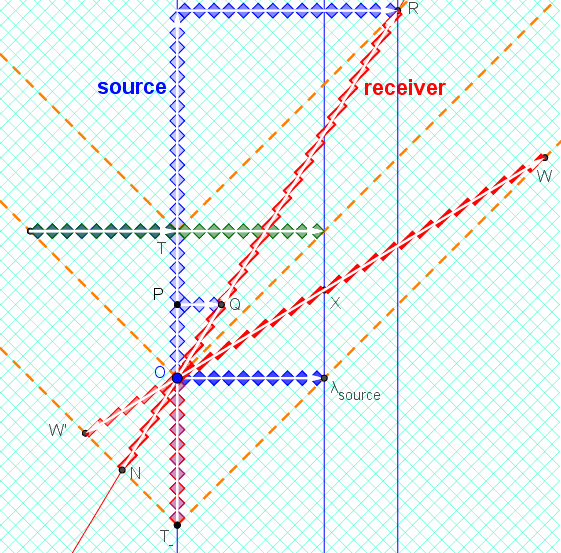 If light was a stream of particles with a small mass, moving almost at c in all normal frames, then we could use the length contraction formula without any problems.

Luckily we can never be sure that photon does not have some small mass.

So if we pick a speed close enough to c, we get answers that current experiments can't prove wrong.

So let's see how that could be done. The rest-length of a light pulse is gamma times its length when it's moving.

Not the answer you're looking for? Browse other questions tagged special-relativity astrophysics relativity doppler-effect or ask your own question.

1
Energy of a photon in different reference frames
-2
Is length contraction in Special Relativity the same as the Doppler Effect?