Are protons and neutrons 2 dimensional given that they consist of 3 quarks?

Then a neutron or proton cannot be 3 dimensional because three points cannot define a 3-D object, but rather only a 2-D plane.

Does this geometric reasoning apply for quantum particles?

If so then a proton or neutron is must be either 2-D or composed of a 4th particle that gives it a 3-D shape.

Suppose you consider two satellites orbiting a planet with their orbits aligned at right angles:

The above shows that even for a purely classical system three objects can define a 3D structure. For completeness we should point out that quantum objects, like quarks in a nucleus or electrons in an atom, are not points and do not have a position in the sense that a classical object has a position. Quantum objects are delocalised in space, a bit like a fuzzy cloud, so they are inherently three dimensional. A hydrogen atom does not consist of a pointlike electron orbiting in a plane around the proton. The electron in a hydrogen atom is a fuzzy 3D blob centred on the proton.

And to make things even more complicated, hadrons like protons do not consist of three quarks. For the quarks (and gluons) inside a hadron the concept of discrete particles is somewhat vague and a hadron is really a roiling sea of an indeterminate number of particles. When we say a hadron contains three quarks we mean only that on average there are three quarks present.

First, your assumption number 2 is invalid, as I think you are biased by classical mechanics in your understanding of "point particle" but John Rennie already addressed that point.

I just want to complement on this answer in the classical case where your conclusion would not hold either. For example, Lagrange found in 1772 a family of solution where all three point particles do not move in the same plane. A detailed derivation can be found in Danby (1988). Here is what it looks like, where A, B, and C are the position of the three point particle: 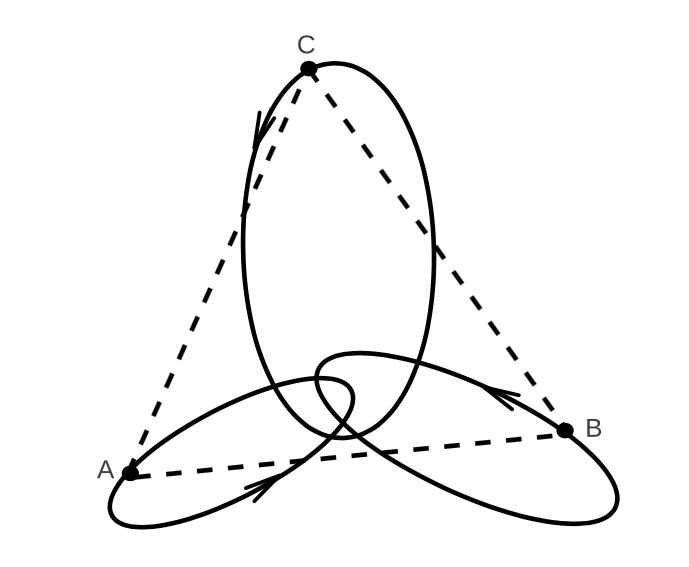 All orbits are ellipses and ABC remains an equilateral triangle throughout.

Many more, way more complex, periodic orbits have been discovered since then. You can find a nice review in Musielak and Quarles (2014). Even if you don't want to or can't follow the math, there are plenty of nice illustrations, see for example figure 3.

So the only question, really, is the stability of such non-coplanar orbits and whether they will eventually become coplanar. Most of the studies of 3-body motion I know of concentrate on a system where one mass is enormously bigger than the others (the Sun, of course). With three equal masses as in your case, I must admit I do not know.

Not the answer you're looking for? Browse other questions tagged quarks neutrons protons or ask your own question.