Is there a connection between Bertrands theorem and Chaos theory?

The methods which one uses to understand or even construct Bertrand's theorem do indeed belong to the wide class of methods which are used also in chaos theory, but the connection is rather loose. I will describe how you can understand even this loose connection.

When we have a dynamical system in classical mechanics, we need to analyze whether it is integrable or not. Integrable means that along the trajectories of the system, we have enough integrals of motion such as angular momentum or energy so that we can express all the future positions and velocities in terms of the initial data in terms of quadratures (possibly implicit formulas featuring definite integrals).

For a higher-dimensional classical-mechanical (Hamiltonian) systems, we have theorems such as Liouville-Arnold's theorem which tells us that if a suitable set of integrals of motion exists, then there exists a solutions in terms of quadratures. More specifically, for a system of $N$ degrees of freedom, one needs a set of $N$ integrals of motion which are independent and in involution via the Poisson bracket.

For bound motion, this ends up in the motion breaking up into $N$ independent periodic motions with $N$ generally independent "fundamental" frequencies. Consider a particle moving in a plane and a central potential: 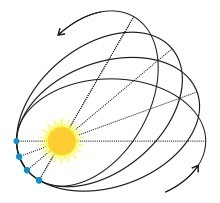 The motion breaks up into 1) a periodic oscillation in the distance from the centre (the periastron and apoastron), and 2) the periodic rotation around the center. If these two frequencies do not match, we get a quasi-periodic motion, a trajectory which is not periodic in the sense of reaching the same point and velocity at a finite time but which still breaks up into a regular product of periodic motions.

However, if there is not a sufficient amount of integrals of motion, the motion gets chaotic. It is notoriously difficult to analytically prove that there is not a sufficient number of integrals of motion for the given set of trajectories in a dynamical system and that these trajectories will thus necessarily get chaotic. There are some methods such as the Melnikov integral (sometimes called Poincaré-Melnikov-Arnold integral) which can show that small layers of chaos in the phase space exist. (Poincaré used something of this sort to prove chaoticity of the three body problem.) But actual investigations in chaos are mostly built around numerical or semi-numerical approaches.

The reason is that when you have a system which is "too integrable", the number of fundamental frequencies reduces. For instance, the motion of a particle in three dimensions will generically have three fundamental frequencies, but the motion in a spherically symmetric and stationary potential will have just two. This is due to the fact that stationarity will give you an energy integral of motion (due to Noether's theorem), and three angular momenta arise due to three rotation symmetries (think Euler angles, not polar coordinates $\vartheta, \varphi$). Not all the angular momenta are in involution but it does not stop them from acting as a constraint which restricts the freedom in which the fully integrable trajectory can wobble. Specifically, the conservation of the whole angular momentum vector restricts the motion to a plane as shown above. So, in spherical systems you end up with an "overly integrable" system which has effectively two degrees of freedom and only two fundamental frequencies.

Now comes the motion in the $1/r, r^2$ potentials. These have special additional symmetries which make the posses additional integrals of motion.

For the $r^2$ it is easy, because the dynamics of the particle in this field corresponds to a Cartesian product of motions of three harmonic oscillators which gives you three integrals of motion corresponding to three energies of the independent oscillators. You know that the fundamental frequencies are the frequencies of the oscillators and thus there will be only one fundamental frequency if you set the stiffness the same in every direction. However, a different point of view on this property is to see that when the stiffness of the oscillators is the same in every direction, the system gets spherically symmetric, we get the additional angular-momentum integrals of motion, and this reduces the number of fundamental frequencies.

For the $1/r$ potential this story is a little bit more difficult since the additional symmetry mixes space and time transformations. The simple consequence is the conservation of the so-called Lenz-Runge vector which once again leads to hyperintegrability and the reduction of the number of fundamental frequencies. But by its very definition, if there is only one fundamental frequency, the motion must be strictly periodic and has to close after one loop.

Nevertheless, this does not prove that the $r^2,1/r$ potentials are the only ones with this property. What Joseph Bertrand actually did is that he has shown that if the potential is any other than $1/r, r^2$ potential, there will always be some trajectories which do not close.

Every spherically symmetric analytical potential which has at least some bound motion will also have circular orbits (which are closed). Joseph Bertrand studied orbits which are very close to circular orbits and showed that already these slightly perturbed orbits will not close unless these potentials are $r^2, 1/r$. The wikipedia page on this topic is well written.

Perturbing orbits and seeing what is their behavior is actually one of the foundational methods of chaos theory and is even the basis of the definition of a Lyapunov exponent, the prime measure of chaos. However, it is easy to see that in Bertrand's theorem these methods are used in a completely different context and to a completely different end.

Demonstrating Bertrand's theorem has attracted lots of interest, and there is quite a bunch of proofs using various methods. My library of papers feature one article [1] which would qualify I think, but it is in French. Here is the published abstract in English

"When a point mass undergoes a central, attractive, gradient force, there exists a one parameter family of circular periodic orbits. Bertrand's theorem asserts that if all the orbits close to these circular orbits are periodic then the potential is Newtonian (i.e. proportional to $1/r$, where $r$ is the distance to the fixed centre of attraction) or elastic (i.e. proportional to $r^2$) (J. Bertrand. Comptes Rendus 77 (1873), 849–853). Following an idea of Michael Herman, we compute the first two Birkhoff invariants of this system along the circular trajectories for a generic potential; then we show how to derive Bertrand's theorem."

and here is a translation of mine of the phrase introducing the developments in the paper:

The phrasing "strict Lyapunov function" is a literal translation which I hope makes sense in English: my knowledge of this field is flimsy!

Not the answer you're looking for? Browse other questions tagged classical-mechanics orbital-motion stability chaos-theory integrable-systems or ask your own question.

7
Radiation from a pair of charged objects orbiting each other
6
Relation between (super)integrability and closed orbits
7
Lyapunov stability of circular orbits
2
On the Stability of Circular Orbits
6
What is the connection between Newton's Shell Theorem and Bertrand's Theorem?
4
Condition for closed orbits
7
Regularization: What is so special about the Coulomb/Newtonian and harmonic potential?
1
Question about a system with all bounded orbits closed and maximal integrable
5
Why does not the central force $-1/r^4$ violate Bertrand's theorem?