Why is the bandwidth of a 'monochromatic' laser beam not zero?

A basic laser stimulates a gain medium's electrons with an optical pump. One of the excited electrons decays to a lower energy level, emitting a photon with some frequency. This photon bounces in the optical cavity, stimulating more electrons at the same frequency creating coherent light. However, laser still have a non-zero bandwidth (I have read that bandwidth has many definitions, so I am using it to describe the length of the optical spectrum).

In addition to all of the very good practical limitations of a 0-bandwidth laser, I'd like to point out a mathematical one.

Your laser is pulsed, by definition. You turned it on, and at some point you will turn it off. Even if you weren't actively trying to generate laser pulses, you are guaranteed to at least have those two events.

There's a rule that no finite-time signal can ever have finite-bandwidth. This is because if you take the purest of sine waves (which have a theoretical bandwidth of 0), and multiply it by an envelope in the time domain (such as a step function turning it on and off), you must convolve the signals in the frequency domain. Any envelope you can devise is non-repeating, so thus must have infinite bandwidth. A pulse for example, a step function on and a step function off, will yield a sinc function in frequency space.

That being said, you can get pretty close!

To add to Mark H's answer, I'd like to flesh out Emilio Pisanty's comment a bit more:

Doppler shifts contribute, but there are multiple ways to make them disappear. However, homogeneous broadening - particularly liftetime broadening, caused by the fact that even if the laser pulse is long, each atom still decays within a finite time - is the ultimate lower limit on the bandwidth.

as I think a few equations with an intuitive overview of homogeneous broadening may help here. As further talked about in my answer here, the Schrödinger equation for the evolution of the Schrödinger-picture quantum state of a system comprising a lone stimulated atom coupled to the electromagnetic field can be reduced to three coupled differential equations:

where $\psi_0(t)$ is the probability amplitude of the emitter atom's being excited together with the continuous functions $\psi_\pm(\omega)$ which are the probability amplitude densitites to find the photon in one of the (in general degenerate) modes with frequency $\omega$ and in left and right hand circular polarization ($\pm$ standing for left and right handed polarization, respectively).

It's very helpful (or at least I find it so) to put into everyday words what all these equations are telling us. The atom is coupled to all modes roughly equally. However, it cannot emit into all equally, because if it couples to a frequency significantly away from $\omega_0$, destructive interference hinders the process. So only frequencies near $\omega_0$ are excited. But the weaker the coupling, the less the hindering of this process by destructive interference, hence a broader frequency spread. The behavior of Eq. (1) under broadband assumptions implies a Lorentzian lineshape in the frequency domain, thus we can understand the mechanisms behind the most common spontaneous emission lineshape.

A plot of this process is shown below: 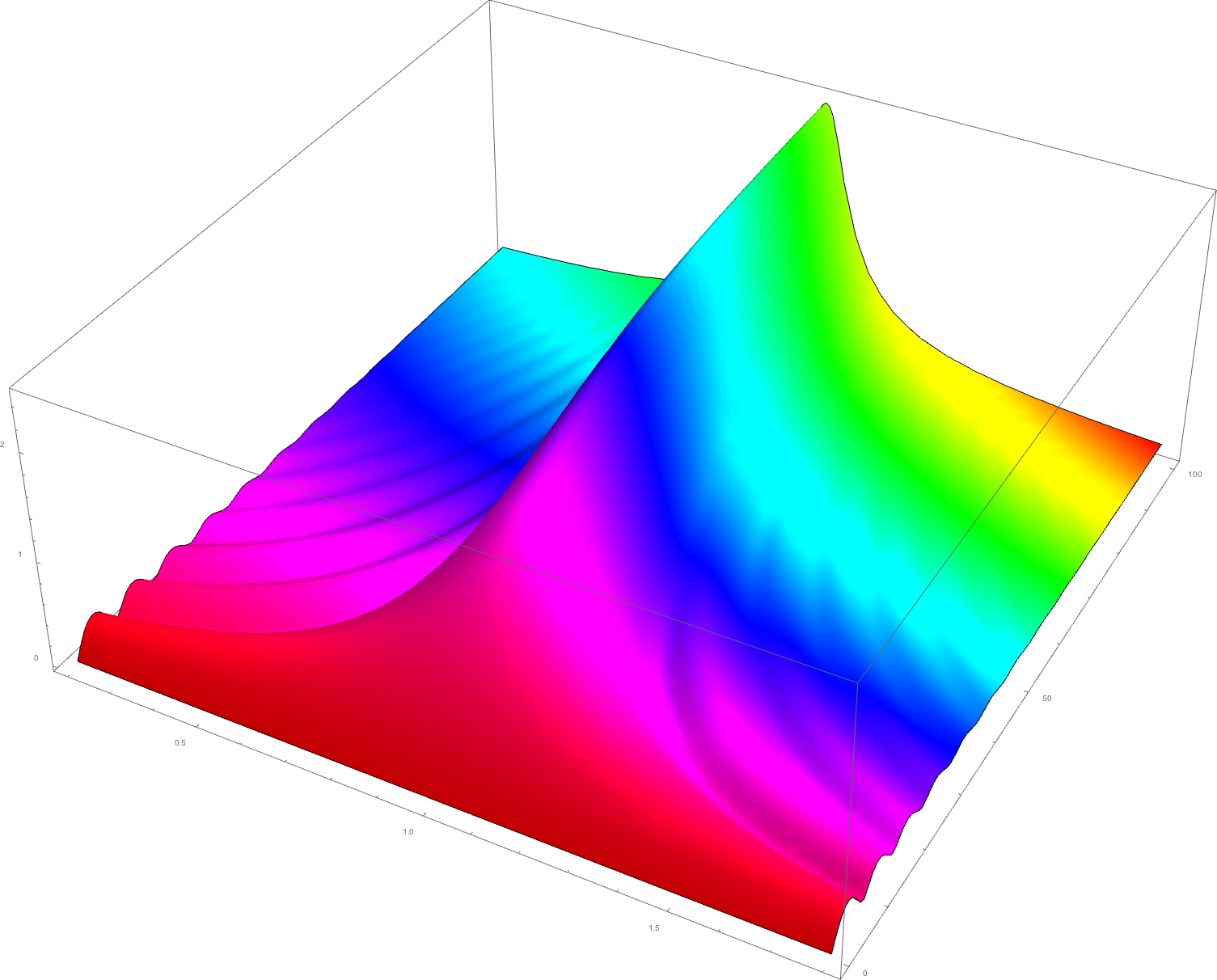 This plot shows the probability amplitude:

for the photon to be found in an EM field mode with frequency $\omega$ (nearly transverse axis) against time $t$ (axis moving away from viewer). The atom transition energy is such that $\omega_0 = 1$ on this plot, and the transverse axis stretches from $\omega=0$ (left) to $\omega=2$ (right). The relaxation time $\tau=10$ and the time axis stretches from $t=0$ to $t=100$. The magnitude is encoded as the vertical axis, the phase as hue. It can be seen that at small times, the probability amplitude is spread over a very wide frequency band, but, owing to the destructive interference mentioned, concentrates itself around the center frequency as $t\to\infty$, such that the probability density becomes a Lorentzian function of frequency.

Take heed that one of the approximations used to derive (2) is that the frequency $\omega_0$ is high enough and the coupling $\kappa_\pm(\omega)$ not so wide that the integration in (1) over the positive frequency axis $\omega\in[0,\,\infty)$ can be approximated as an integral over the whole real line. Indeed, we cannot reproduce the memoryless exponential distribution if we do not make this approximation and truncate the integral as in (1).

For this reason, it is impossible for quantum decays to be exactly memoryless, a fact that has been experimentally observed as discussed in Akhmeteli's Answer here.

Lastly, let's look at the values of Lorentzian linewidth attributable to this effect alone. $\tau$ is most often of the order of a nanosecond, as I discuss here, which implies a linewidth of $100{\rm MHz}$, equivalent to about $10^{-4}$ of a nanometer linewidth. The resonant cavity further narrows this linewidth by the phenomenon of Purcell Enhancement (I further discuss this in the latter part of my other answer); one hundredfold narrower linewidths are therefore not uncommon in lasers.

Two sources of bandwidth broadening include:

A completely monochromatic laser beam is impossible in theory, and it's partially blameable on doppler shift (as people have stated here) and mainly blameable on Fourier analysis. I see no one explained the Heisenberg Uncertainty principle perspective yet, so I'll expand on Mark H's answer and attempt to explain it here generally. The Heisenberg Uncertainty Principle is famously:

This can be loosely stated as: a particle with a well-identified position has an unidentified momentum - the two cannot both have small values which would lead to precision of measurement.

Your question is an excellent demonstration of this principle. Light waves all have what is known as a wavenumber $k$ that is a frequency scalar. It is defined as an amount of radians per unit distance, equal to:

However, we can relate $\lambda$ to the following:

Which means $k$ is directly proportional to $p$. When we use lasers, $\Delta x$ is almost always small, since the light is centered at a beam. As a result, $\Delta p$ must be larger, and since $p$ is proportional to $k$, we have a spectral range for the laser, and thus it cannot be monochromatic.

In fact an infinitely narrow spectrum (0 bandwidth) is just purely mathematical and is represented by the Dirac delta function in frequency domain.

You can first see the electromagnetic waves emitted by a laser just as the oscillation of a simple pendulum. Even if a simple analysis gives you a well define resonance frequency (which is basically oscillation per second - in the case of the laser it's the wave frequency), a simple pendulum is not suitable to be a perfect clock : there are losses due to friction for instance and these energy losses (accounted for in what we call the Q factor) can be responsible for little variations around the predicted frequency : hence even by knowing the resonance frequency you cannot measure time with infinite precision just by measuring the number of oscillations, seems quite obvious I would say. That also explains why we tends to measure time with atomical or optical clocks by the way, just because this effect is minimized in such systems, but it still exists. Basically this thing is called "frequency jitter". https://en.wikipedia.org/wiki/Q_factor

The same thing applies for laser : the spacing of two mirrors in a simple optical cavity gives you regularly spaced modes (longitudinal resonance conditions). These cavity modes have a certain linewidth due to losses at the reflection on mirrors. What it means in this case is the following : photons with a slightly frequency offset can still make a few round trips in the optical cavity and also contribute to the stimulated emission process

The very same thing happens for the gain medium which cannot store energy indefinitely and emits photons by spontaneous emission which also contributes to the beam with a certain bandwidth you can first describe by Heinseberg's uncertainty principle.

This two considerations constitutes the quantum limit to the linewidth of a laser as described here : https://www.rp-photonics.com/schawlow_townes_linewidth.html

In practice this limit is hard to reach and the laser is also sensible to various technical sources of noise. One of the simplest to understand is just thermo-mechanical noise inducing fluctuations of the length of the cavity and thus on the resonant frequency.

23
Does average lifetime even mean anything?
16
Can we find the exponential radioactive decay formula from first principles?
6
Why do lasers require mirror at the ends?
6
Existence of monochromatic pulses?
8
Understanding the statement of the bandwidth theorem
7
How long does an electron stay on a given orbital?
0
How can you work out the FWHM of the gain profile for a longitudinal laser cavity?

3
What are the practical consequences of "approximate" quantum cloning with a stimulated emission cloning machine?
4
What determines laser frequency?
0
What exactly is Q-switching?
7
If turning a perfectly monochromatic laser on for a finite time gives a frequency spread, where did the other frequency photons come from?
2
Scattering vs Stimulated Emission
5
Homogeneous gain saturation and single-longitudinal-mode lasing
1
Why can no commercial laser products achieve a frequency stability of $< 1 \ \text{Hz}$?
0
How does stimulated emission occur in 3 level lasers?