Is the quantum world affected by the law of causality, or it is just really random? [closed]

If the quantum world is really random why a random quantum event 'e' happend in the way 'a' and not in the way 'b' . what caused that ?

Is the quantum world affected by the law of causality, or it is just really random?

Causality is the relationship between causes and effects. It is considered to be fundamental to all natural science, especially physics.

It implicitly includes the time variable, against which cause and effect play, and time is a unidirectional arrow classically, it always increases. This is also true at the quantum mechanical level.

Randomness is the lack of pattern or predictability in events.1 A random sequence of events, symbols or steps has no order and does not follow an intelligible pattern or combination. Individual random events are by definition unpredictable

So to address the title:

Is the quantum world affected by the law of causality, or it is just really random?

Due to the arrow of time quantum mechanical models always have a cause and effect, and these models fit the data very well.

This simple Feynman diagram, a calculation help to determine the crossection of electron electron scattering at low energies,

has the arrow of time on the y axis. First electron meets electron and then it scatters off exchanging energy and momentum with a virtual photon , cause - effect. They meet and they scatter.

Thus the law of causality is obeyed in our quantum mechanical modeling of the microcosm.

How much they scatter is determined by the functions describing the scatter, and that is where there is a probabilistic interpretation needed.

Where randomness is relevant is not in the causal chain. It is in the modeling itself of the interaction with a wavefunction whose complex conjugate squared gives the probability of finding the electrons after scatter with specific momenta and position.

Probabilities are connected with randomness, as for example, one expects a flat probability for the throws of an accurate dice, and the probability of each side to come up is equal to 1/6. A definition of randomness.

If the dice is biased, 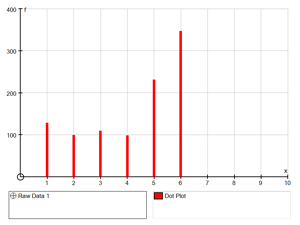 and the probability distribution is not flat, one knows there is a cause of not being flat,the bias. Still it is not possible to predict which side will come up on a throw basis, but in the accumulated distribution the bias clearly shows, so one knows that the effect is not random, just that it cannot be nailed down at a single throw level.

It is the same with the quantum mechanical probabilities, they are not flat.Here is how the Higgs was discovered, in a convoluted bias in , what is essentially, a probability plot. 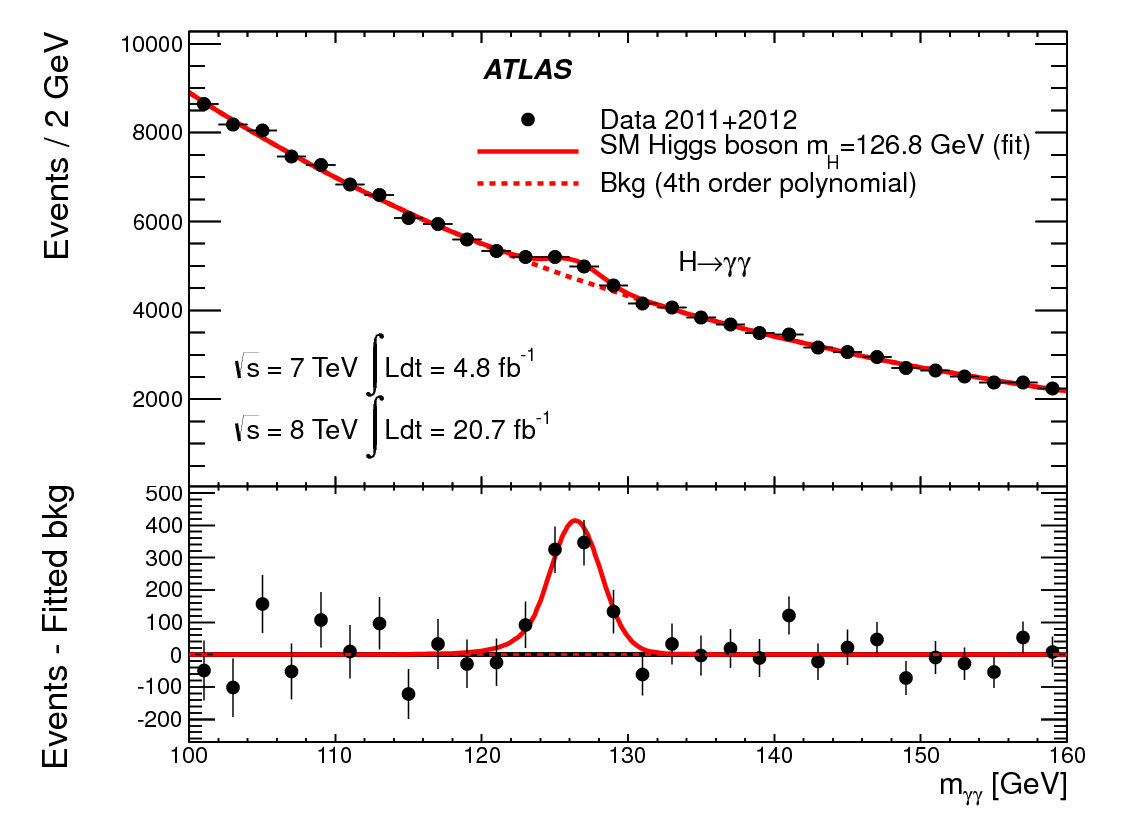 The background smooth dashed red line is essentially what one would expect from "random" scattering ( it is folded with the known interactions of e+e-) it is smooth. In the lower plot the other interaction probabilities are mathematically taken away, and the smooth background of a uniform random process is indicated by the flat line, where the Higgs shows up like a sought after bias from new physics.

So the quantum world is affected by causality and is biased, not random, with the interaction probabilities of the particular experimental setup.

We take an electron, prepare it for measurement in some special way and then measure it's spin (or momentum). The outcome of this measurement can be either "spin is 1/2" or "spin is -1/2". (If you do not know what is spin - that's ok, just replace this word with word "something" :) )

So, we have an electron and are going to start the measurement now. Quantum mechanics says that it's impossible to tell in advance what would be the outcome of the measurement!

It resembles the situation when we flip a coin, but it is very different! Before we flip a coin we can measure very precisely initial coin's position, velocity, then properties of the table's material, properties of air in the room, etc., and then calculate the outcome of the flip. It may be very difficult to perform all the necessary calculations, but still theoretically possible. And it would turn out that the outcome "we have got tails!" is not actually random. The reason why we have got tails is because we have thrown the coin exactly like this. Initial configuration is the cause the the outcome is "tails" not "heads".

But in quantum world it's impossible. The outcome of measurement is random and can not be determined by initial state of the system!

Note, that this is "according to quantum mechanics". It may turn out that quantum mechanics is not good enough. May be there is a better theory which would allow to account for some "internal state" or "hidden parameters" of the electron, and it we account for these parameters we would be able to explain why the result of this particular spin measurement happened to be 1/2, not -1/2.

As far as I know all the attempts to develop such a next-generation theory failed so far. More than that, there are some results which state that even if such theory exists it would be quite "weird".

Looks like quantum effects are really random. We have a result of some measurement, and there is no way to explain why this result is what it is, why not some other.

There can not be anything random. But we can not always assign a cause. This depends upon our ability to assign a cause, and compute the outcome accurately. That is not possible due to complexities involved in some processes. The insurmountable complexities are given the name randomness.

There is nothing random in nature. If things were really random, the conservation laws at macro levels would be violated very easily and randomly as well.

The fact that the conservation is always observed at macro levels, is an evidence that nature knows how to round up the so called "random" events into a lawful/causal macro state.

At individual quantum event level, the cause and effect are so miniscule that we have no means of tracking them at individual level. At individual levels, the events, their cause/effect seem to be immaterial to us and so, can be classified as random.

Therefore, with due respect to the quantum scientific community, somehow, they do not like to say - "We do not yet know how it happens but it does happen" and prefer to call it "random".

It is also likely that the scientific community already knows that we have hit the smallest levels of nature and we will never be able to demonstrate cause and effect at individual event levels. Therefore, it will always remain that way. In that scenario, it does not matter whether we continue to call them random or not.

But again, the randomness is rounded into conservation at larger levels, therefore, beware that something is tracking it!

As said above, at a point this becomes a philosophical interpretation.

However, imagine you're standing in a busy line at a cinema.

Although there is a sequence of circumstances that led every person to be exactly where they are standing, these circumstances aren't known to you and in practice may be unknowable.

From your perspective the crowd seems random, based on the information available to you. Perhaps they all came from a golf tournament, or were each inspired by a coupon or the hot sun?

The patron in front of you reaches the counter, and to your surprise buys a ticket for the same movie. With so many films currently screening, what a coincidence!

Once you make it inside the theater, you realise around half of the cinema patrons chose this film. An even greater coincidence? You ask the usher. They tell you they've worked at the cinema for a long time, and for a film like this the crowd is just as they'd expect.

Now you come out of the theater and see an old friend! Living so far apart you ask how they found themselves at the cinema. They tell a wild tale of a traffic accident caused by a loose shoe, and the random coincidence goes some way to being explained.

However, this ignores the frayed shoelace owing to an exposed nail loosened by the dry weather, etc. Everything led to this encounter, but everything is beyond the reaches of detection.

Much like a child repeating the question 'why?', there is an expectation that eventually it all boils down to a single answer, but complexity builds before we even get close.

I think this might be of interest to you.

Not the answer you're looking for? Browse other questions tagged quantum-mechanics causality randomness or ask your own question.

4
How do we know that nuclear decay is truly random and spontaneous?
2
Is a dice roll deterministic?