How did planets have an elliptical orbit in the first place? [duplicate]

Just as an analogy, consider a simple harmonic oscillator whose equilibrium is at origin. The potential energy is a parabola with vertex at $x=0$. The minimum energy the oscillator can have is $E=0$ which means that it is at rest at the equilibrium position. As we increase its energy, it gets kinetic energy which is constantly interchanged with potential energy, giving rise to oscillations.

The motion of a massive particle under the inverse square force is also determined by its energy but also by its angular momentum. The solid line in the plot bellow shows the effective potential as a function of the distance $r$ to the centre of force. That potential looks that way because angular momentum is conserved and rotational kinetic energy behaves as a repulsive potential energy, the so-called centrifugal potential. 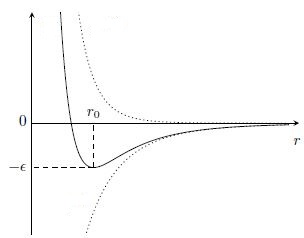 The minimum energy a particle can have is $-\epsilon$. This corresponds to constant $r=r_0$ and you can think of this circular motion as a sort of dynamic equilibrium. In order to increase planet's energy one needs to give it some impulse. No matter the direction of this impulse, the planet will tend to move out of its circular motion and therefore change $r$. This change cannot be arbitrary though. Energy conservation shows that for mechanical energy $-\epsilon <E<0$, the value of $r$ lies in the interval $r_{\mathrm{min}}\leq r\leq r_{\mathrm{max}}$. The orbit therefore can no longer be a circle, the radial distance oscillates. Since potential energy changes, kinetic energy and velocity also change. In fact, $r_{\mathrm{min}}$ and $r_{\mathrm{max}}$ correspond to the semi-minor and semi-major axes of the ellipse. However, a simple energy diagram is not enough to show the motion is actually an ellipse. This can be obtained by solving Newton's second law in the form of the so-called Binet equation or exploring the conservation of the Runge-Lenz vector.

As you can see, a circular orbit is actually a very special orbit in the sense that the particle must have the exact energy $-\epsilon$. It is therefore statistically more probable that during a bounded orbit formation, the orbit be be non-circular, i.e. elliptical.

The laws of physics.

Take a tiny body (relative to the sun) and drop it off in some random position and velocity.

Its motion will be described by a conic section formula. As it falls toward the sun, it speeds up because that's how potential energy works. When it picks up enough speed, it flys away again because its tangential velocity is greater than what “falling” can bring back. Famously, Newton figured this out based on the premise of an inverse-square force.

If the body was dropped off with too much energy, the curve is a hyperbola and it flys away never to return. If it's aimed exactly right you get a line, which crashes into the sun. What’s left? Ellipses.

The shape and speed behavior is a consequence of having a central force that falls off with the square of the distance.

Not all orbiting bodies did originally have elliptical orbits.

Those that didn't either spiralled into (or away from) the sun or they acquired elliptical orbits (which are locally stable).

By the way, perfectly elliptical orbits are not possible according to GR.

Compared to the Sun, planets are sufficiently tiny that they generally don't affect each other's orbits. Therefore, orbits in a typical solar system can be thought of as two-body interactions between a planet and the Sun. Closed two-body orbits are always elliptical (as per Kepler's First Law), and this can be derived directly from Newton's Laws. For a derivation, see the following: http://galileo.phys.virginia.edu/classes/152.mf1i.spring02/KeplersLaws.htm.

Some orbits look more circular than others, but nature never presents us with perfect circles. All orbits are ellipses to some extent. There are a few factors that influence eccentricity of the orbits. Most of the orbits are pretty much the same as when the solar system was first formed. Then you have the cumulative gravitational influences of the planets on each other, effect of the moons, collisions with other celestial objects, and the gravitation influences of comets and other kuiper belt objects that have extremely elliptical orbits that penetrate the solar system from time to time.

Not the answer you're looking for? Browse other questions tagged newtonian-mechanics newtonian-gravity orbital-motion solar-system celestial-mechanics or ask your own question.

24
Why are orbits elliptical?
36
Why don't planets have Circular orbits?
1
Elliptical orbit of revolution of earth
25
Why are the orbits of planets in the Solar System nearly circular?
-2
Why is the Earth's or other planets orbit elliptical instead of being circular such as of moon?

5
Historically, how do we know that Earth moves around Sun? And it does so in an elliptical orbit?
36
Why don't planets have Circular orbits?
8
Do the planets really orbit the Sun?
4
Why are large planets away from the Sun and smaller planets near the Sun?
2
Satellite in Elliptical orbit