It is known that electric field inside a uniformly positively charged ring (for points in the plane of the ring) is directed towards centre. But when i tried to prove this using the following steps, it turns out to be 0. Let us consider a point P in plane of a uniformly charged ring with centre at 0. Lets draw a diameter AB for the ring which contains the point P. Now, if we rotate the ring along this diameter AB, the locus followed by ring would be a spherical shell. If we assume that electric field at P is towards the ring's centre, rings obtained by rotating the ring along AB would also have the field towards centre O , as they all have a common centre O and for each ring, point P is equivalent location. By superimposition, sum of field due to all such rings (obtained by roation of the original ring) at P would be equal to field at P inside a uniformly charged shell,which is zero. Thus field by individual rings must be zero. But its not. Please tell me where i am mistaken.

As Bzazz points out, the shell you are constructing has not its charge uniformly distributed. In fact the charge density follows the law $D_q(\vec r)=\dfrac{\lambda}{2\pi}\dfrac{1}{\sin\alpha}$, with $\vec r$ the position of a point in the shell, $\lambda$ is the density of charge per unit of length of the original ring and $\alpha$ is the angle formed by $\vec r$ and the axis of rotation you've chosen. Even not considering other issues, clearly the construction doesn't preserve the symmetry of the original problem, then it's not a surprise it doesn't give the expected result either.

If you rotate a ring uniformly charged or, better, as it seems yo are doing, you take rotated copies of the ring to form a sphere, the charge is denser near the poles than at the equator. Consider quadrilaterals formed by a pair of fixed, close each to other, meridians and several pairs of parallels. Those quadrilaterals have the same amount of charge at first approximation but their surface is different. The field in the interior is not zero as the density of charge is not constant, so, no contradiction, simply is not the same problem. Anyway, it can be a winding way to get the field (I doubt that as the symmetry of the original problem is lost), but then, all the savings became waste. 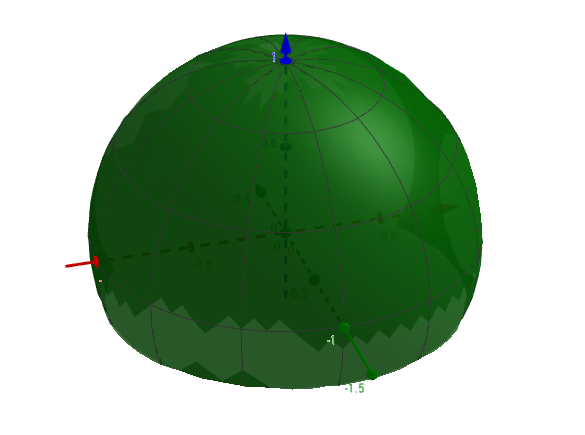