Why do different letters sound different?

If one sings the letter "A" and "M" at the same volume and pitch, the two letters are still differentiable. If both pitch and volume are the same however, shouldn't the sound be the exact same?

You don't sing a single pitch - you sing a frequency and its harmonics. Using a simple spectrum analyzer, this is me "singing" the letter A and M, alternately (AMAMA, actually): 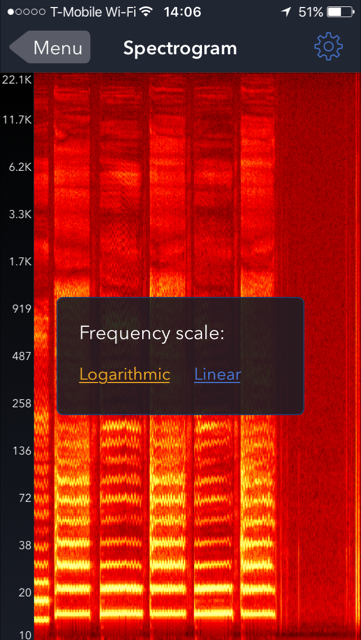 The letter "A" is the one with more harmonics (brighter lines at higher frequencies), the letter "M" seems to have a bigger second harmonic. The frequency scale is not calibrated correctly (cheap iPhone app...)

Here are two other shots, side by side (M, then A). You can see that the 2nd harmonic of the M is bigger than the first; by contrast, the higher harmonics from the A are dropping off more slowly: 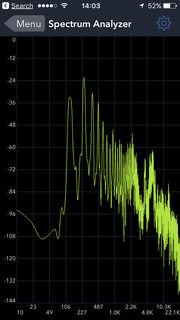 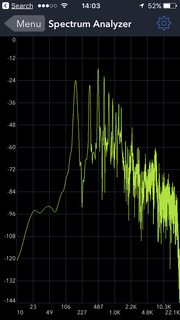 Simple vowels have this in common: the shape of your mouth changes the relative intensity of harmonics, and your ear is good at picking that up. Incidentally, this is the reason that it is sometimes hard to understand what a soprano is singing - at the top of her range, the frequencies that help you differentiate the different vowels might be "out of range" for your ears.

For short ("plosive") consonants (P, T, B, K etc), the story is a bit more complicated, as the frequency content changes during the sounding of the letter. But then it's hard to "sing" the letter P... you could sing "peeeee", but then it's the "E" that carries the pitch.

The app I used for this is SignalSpy - I am not affiliated with it in any way.

The basic frequency is determined by the vocal cords. They make the air flow pulsate with a frequency of 100 Hz to 200 Hz. The pulses are short, so there are overtones upp to several kHz.

The mouth and tongue make the vocal tract resonant at different frequency ranges. Those are called formants. Have a look at the formant map here: https://www2.warwick.ac.uk/fac/sci/physics/staff/academic/bell/sonify/ttm/sound_files/

Here's something different to note. Let's say I would tell a band to play the musical note "C3". The bass, the guitar, the piano, the voice, the banjo, all of them sound different and yet we perceive them as the same note that has been played.

Similar, think of a sung "A" and a sung "B" (as in "bee") as an instrument respectively. They have their own unique "sound" to them, and yet they can both be used to create the same "musical note" of a certain given pitch and volume.

Here are two pictures to illustrate what I mean: 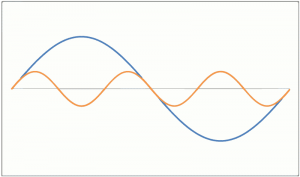 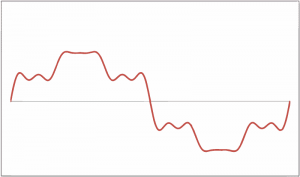 Both of them have the same amplitude, or volume.

Both of them have the same perceived frequency, or pitch.

Thus both of them play the same musical note we perceive.

But looking at the wave form, you could probably tell that they will sound differently, even though we would perceive them as the same note.

This difference is similar to a piano C3 vs a guitar C3.

So a sung "A" and a sung "B" are actually quite different from each other. But if sang with the same pitch, they will produce the same musical sound (as perceived by humans).

Source of the images used

Letters, physical sounds, and the sounds that we hear
Let me remark first that many languages (and notably English) do not have a one-to-one correspoindence with the sounds. In other words, letters are symbols, and some of them or groups of letters may correspond to several sounds, and same sound can be sometimes represented by different (combinations of) letter.

Studying how different sounds are produced is called phonetics. Note that this is different from phonology, which studies the systems of sounds used by particular languages. Although all humans, in principle, are capable of producing and distinguishing the similar range of sounds, many of them will be treated as one sound by a specific langauge (allophones). As the sound system is learned in the early childhood, we quickly lose the ability to differentiate the sounds that are considered as one by our native language.

(My personal experience is that literate people often fail even to hear the sounds of their own language, as their thinking is too focused on how the word is spelled. Trying to teach a foreigner your language quickly uncovers it.)

Sound spectrum
Being acoustic waves, sounds principally differ in their amplitude and spectrum. Apart from tonal languages (such as Chinese), the volume of a sound usually indicates stress, whereas its pitch (i.e., its relative position on the frequency scale) does not change the meaning of the sound. Thus, the main distinctions between the sounds have to do with the shape of their spectra, which is controlled via the articulation.

Vowels
It is necessary to distinguish vowels and consonants. Vowels are the sounds that can be sounded continuously - they are essentially modulated frequency waves, similar to those produces by brass musical instruments. Just like with the muscial instruments, the quality of a vowel is controlled by teh shape of teh resonator, that is our oral cavity. Vowels are usually by the position of the tongue (high/low and front/back), by the position of the lips (roudned/unrounded), and by whether the air stream passes through the nose or not (nasal and not).

Consonants
Consonants differ from vowels by the associated movements of the speech organs - e.g., by sudden release of air (plosive consonants), by rythmic vibrations of tongue (such as versions of r in different langauges), etc. Their classification is more complex than that of vowels but also well established (see the WIkipedia article cited in the beginning). Consonants are thus associated with short pulses or series of pulses (as opposed to the continuously sounded vowels).

Not the answer you're looking for? Browse other questions tagged acoustics everyday-life frequency biology or ask your own question.

4
Identifying speech sounds from sound waves
0
Difference between vowels
44
If a thousand people whisper inaudibly, will the resulting sound be audible?

12
What are those characteristics by which every sound can be identified uniquely?
28
Physics of weird "boing" sound in racquetball courts?
1
How can a loud sound's perceived pitch differ from its predicted value from only its frequency?
0
How do sound waves from different distances not mess up the pitch?
0
How to explain the difference of attenuation of different pitch of sound by kinetic molecular energy?
0
Why does sound travel slower through solid than through air here?