Is it possible to construct a lens which focuses all the light rays from an extended object in one point?

A perfect lens focuses the light rays from an extended object (in a plane at a constant distance from the lens), in the focal plane corresponding to the distance of the object.

Now there is an infinite amount of possible forms of lenses. Is among those one form which focuses all the light rays coming from, say, a circular flat surface, parallel (in the mean) to the lens, which focuses all the light rays emanating from the circular surface not onto the focal plane corresponding to the distance (in the mean) between the surface and the lens, but to one point (which, if the lens can be made, probably lies in the focal plane)?

visible-light refraction lenses
Share
Improve this question
asked May 27 '17 at 15:58

If such a lens was possible this would solve several problems. Unfortunately such a Maxwell's Demon is in conflict with physical laws, which more or less state the same:

From the symmetry properties of Maxwell's equations optical paths must be bidirectional – exchanging start and end point results in the same path, just reversing its direction. That means that there is no optical element transforming two distinct paths onto one path. In a normal optical transformation like in the first picture you can map a set of rays that are distinguishable by their direction of propagation onto another set of rays distinguishable by their direction of propagation:

But imagine a set of light rays coming from different spots in the extended source hitting the lens at exactly the same position. In order to make all the light from these rays go through the desired point the lens must map them onto exactly the same outgoing beam:

This kind of mapping is not reversible:

From the laws of thermodynamics it is known that in a closed system entropy must never decrease. Consider the ingoing rays and the lens as a closed system with a certain entropy, which is given by their disorder, e. g. their distribution in phase-space (position, direction). Then the impossible mapping from the previous example would decrease the entropy of the rays being mapped onto the same ray.

Changing into the picture of photons, one could use statistical description methods for point particles. Liouville's equation states that the phase-space density $\rho$ of a set of point particles does not change under time evolution: $$ \frac{d\rho}{dt} = 0 $$ Of course photons are not point particles, but it turns out that a similar relation can be found for quantum mechanical systems described by a density matrix $\hat{\rho}$, which is given by the von Neumann equation $$ i \hbar \frac{d \hat{\rho}}{dt} = \left[ \hat{H}, \hat{\rho} \right] $$ with $\hat{\rho}$ being the density matrix of the state in the Schrödinger picture and $\hat{H}$ being the Hamiltonian. As photons propagating through free space and passive optical elements is an eigenstate of the Hamiltonian the commutator is $0$.

The fact that the phase-space density does not change prevents compression of the light into a phase-space volume smaller than the original source (which is bigger than a point source emitting in all possible directions).

The von Neumann equation leaves a possible setting where all light from an extended source can still be focussed onto one point (or let's say diffraction limited spot). In the case of a pure state $\hat{\rho}_{\text{pure}} = \left| \Psi \right\rangle \left\langle \Psi \right|$ with minimal entropy there is no decrease of entropy necessary to focus it onto one spot. This can be achieved with a spatially coherent source, e. g. a source where the shape of the wavefronts does not change over time. Then, knowing the wavefronts in the plane of the lens one just needs to produce a phase mask that accumulates optical phase in each point such that a spherical wave is created: 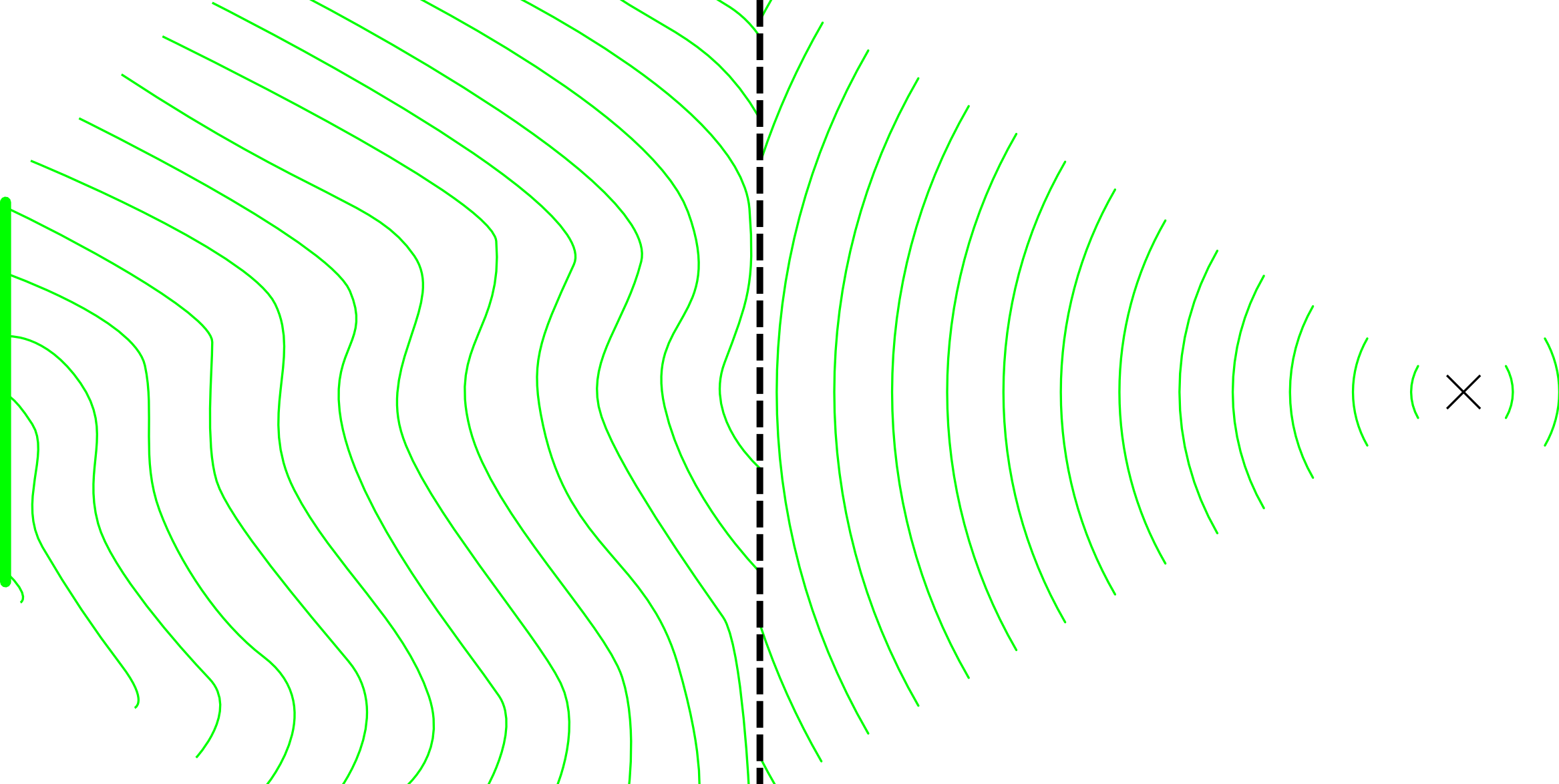 Not the answer you're looking for? Browse other questions tagged visible-light refraction lenses or ask your own question.

45
If a lens focuses all incoming light to a point, how do we get 2D images?
2
What is exactly an ‘virtual object’? (From the point of view of lens maker’s formula)
3
Why is an image formed when two light rays coming from an object intercept?
0
Can an object at the focal length of the eye be seen?
0
Overall power/focal length of an eye and corrective lens system