The energy momentum tensor for a perfect fluid is defined as:

Where $\rho$ is the energy density, $p$ is momentum, $U$ is the four-velocity (tangent vector parameterized by proper time), and $\eta$ is the Minkowski metric.

First of all, I believe $\partial_\mu T^{\mu \nu}$ has four components, where each component is the divergence of momentum multiplied by $U^\nu$. (This is the change in momentum flux in the $\nu$ direction?)

Furthermore, I write a lot of notes in my textbook, and in trying to explain this, I find myself struggling when referring to parts of a tensor. For example, can I say something like "The second index of $T^{\mu \nu}$ represents the directional component of the tensor."

(I am struggling w/ tensors, so any detailed explanation is very much appreciated).

This leads to several natural operations, eg integration over 3-surfaces of spacetime (yielding a 4-momentum covector), contraction with a 4-velocity (yielding energy-momentum densities as measured in the corresponding frame), or exterior differentiation (think divergence, which can eg be used to generalize Newton's equations to relativistic continuum mechanics).

More pragmatically, the meaning of the individual components of the SEM tensor are 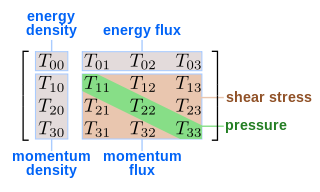 When we contract $\partial_\nu$ with the column index $\nu$ of $T^{\mu\nu}$ we get a continuity-equation style expression for each row indexed by $\mu$, ie $$\text{time derivative of density} + \text{divergence of flux}$$

Not sure if it will help much, but here's a short explanation how the formalism works for people without a background in differential geometry:

In continuum mechanics, we have to operate with spatial densities, so instead of, say, an energy $E$, we need an energy density $\epsilon\,\mathrm dV$.

Naively, the generalization of the momentum 4-vector to continuum mechanics would then be something like $$ \rho_\mu\,\mathrm dx^\mu\otimes\mathrm dV $$ where $\rho_0=\epsilon$ is our energy density and $\rho_i$ are the spatial momentum densities.1

The correct generalization of the 4-momentum turns out to be the SEM tensor, whose first index labels the directions of momentum space, and its second one the above volume elements.

Finally, for convenience, the Hodge star can be used to represent the volume elements of the 3-dimensional hyperplanes by their normal vectors, eg $$ \star\mathrm dt = \mathrm dx\wedge\mathrm dy\wedge\mathrm dz $$

1 and that's indeed the first column of the SEM tensor

Not the answer you're looking for? Browse other questions tagged general-relativity vectors tensor-calculus stress-energy-momentum-tensor or ask your own question.

3
Having trouble seeing the similarity between these two energy-momentum tensors
23
Energy-Momentum Tensor in QFT vs. GR
2
Derivation of the relativistic equation of energy conservation for a perfect fluid
0
Conservetion of Stress-Energy Tensor for a Perfect fluid
4
How do you compute the stress-energy tensor for electromagnetism + gauge fixing term?
1
Sign confusion in the energy-momentum tensor for the Klein-Gordon scalar field in Wald's General Relativity
1
Perfect fluid stress tensor