Base unit definition and realization under relativistic conditions

The definitions of the base units of the SI were adopted in a context that takes no account of relativistic effects. When such account is taken, it is clear that the definitions apply only in a small spatial domain sharing the motion of the standards that realize them. These units are known as proper units; they are realized from local experiments in which the relativistic effects that need to be taken into account are those of special relativity. The constants of physics are local quantities with their values expressed in proper units.

Physical realizations of the definition of a unit are usually compared locally. For frequency standards, however, it is possible to make such comparisons at a distance by means of electromagnetic signals. To interpret the results the theory of general relativity is required since it predicts, among other things, a relative frequency shift between standards of about $1$ part in $10^{16}$ per metre of altitude difference at the surface of the Earth. Effects of this magnitude cannot be neglected when comparing the best frequency standards.

(If you need a refresher of the explicit definitions of the base units, scroll down to the Definitions header.)

This question in particular pertains to the metrology, not the relativity:

In practice, what are some ways in which a scientist could realize the definitions of units within an environment subject to relativistic transformation such that the units could be used to indicate those transformations?

Unless you have them memorized, you may find it helpful to reference the following definitions of the seven base units as quoted from section 2.1.1 of the aforementioned full SI brochure, although original stylization is not reflected:

The kilogram is the unit of mass; it is equal to the mass of the international prototype of the kilogram. . . .

The second is the duration of $9 \, 192 \, 631 \, 770$ periods of the radiation corresponding to the transition between the two hyperfine levels of the ground state of the caesium 133 atom.

The ampere is that constant current which, if maintained in two straight parallel conductors of infinite length, of negligible circular cross-section, and placed $1$ metre apart in vacuum, would produce between these conductors a force equal to $2 \times 10^{−7}$ newton per metre length.

The mole is the amount of substance of a system which contains as many elementary entities as there are atoms in $0.012$ kilogram of carbon 12. . . .

The candela is the luminous intensity, in a given direction, of a source that emits monochromatic radiation of frequency $540 \times 10^{12}$ hertz and that has a radiant intensity in that direction of $1/683$ watt per steradian.

It may be worth noting that the definitions of the kilogram, second, kelvin, and mole have relatively minute specifications about (in respective order) the contamination, thermodynamic temperature, isotopic composition, and the atomic bonding and energy level of the matter to which they refer.

The way you normally solve this is by making sure that you're very clear on exactly what quantity you are reporting, and what frame of reference it corresponds to.

It's important to note that the situation you ask about ("within an environment subject to relativistic transformation") is not an unreasonable thing to ask for: it is routinely realized when comparing the realizations of the second on GPS satellites w.r.t. those on Earth surface, or indeed between optical clocks with height differences as small as 30cm (source).

When doing things like these, the realization does not change: each satellite carries on board a caesium clock (or probably two, as it turns out), and this is used to provide in situ a local realization of the SI second. (Take, that, IPK! let's see the prototype mass standard do something like this, eh?) Thus, the correct metrological response to an environment with relativistic effects really is to produce a local realization of the SI standards.

In cases like those, the length of the time interval between two events on the satellite or two events on the surface are normally measured in seconds, but the value in seconds will depend on who you ask, and the response to that question needs to be notated somehow. This gets, I think, to the second heart of your question, if I understood it correctly,

such that the units could be used to indicate those transformations?

I think a good analogy for this is this passage from §5.3.7 of the full SI brochure, which reads

This is a good instance of a general tendency: don't overload the unit symbols with information; instead, put that kind of additional information about the quantity being measured into the symbol for said quantity.

For further reading, the reference given in the SI brochure,

A lot of those definitions are expected to change in the next year or so, but perhaps not the definitions of the second -- which is exactly where relativity strikes home. 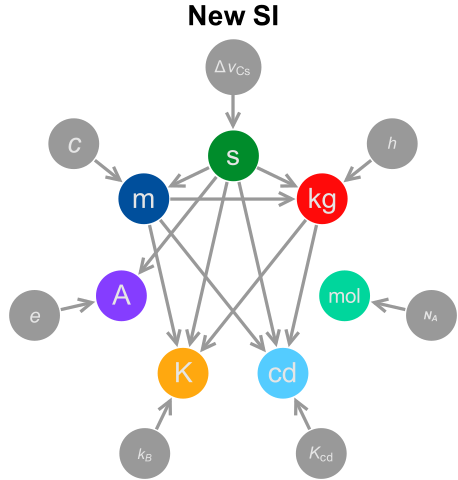 Note how five of the base SI units depend on the second. (The only ones that don't are the second itself and the mole.) Naively following the proposed update on a spacecraft, a fast-moving train, or even atop a mountain will result in subtly different concepts of length, mass, current, temperature, and luminous intensity compared to those of an observer at rest with respect to the surface of the Earth and at sea level.

The spacecraft and fast-moving train are rather obvious. People are taught the basics of special relativity as children nowadays. The mountaintop vs sea level differences are a consequence of general relativity. Mountaintop elevations are not needed. Atomic clocks are getting so accurate that just a few meters of elevation difference suffices to make atomic clocks tick at measurably different rates. Metrologists have long adjusted their atomic clocks for altitude.

There are two points I would like to make: clock synchronisation and the effects of gravity.

As soon as a measurement involves recording a time in two different location in space, let's call them A and B, the result is plagued by an arbitrary: how was the clock used to record the time at A synchronised with the clock used to record the time at B. One may decide once and for all to always use the same synchronisation method for all of metrology, of course — this could be Einstein synchronisation, or slowly move a clock from A to B, those two procedures being only equivalent if time dilation is as predicted by Special Relativity. But still, it is much better to only perform experiments involving a single clock.

This does not make such an experiment necessarily local of course. For example, the round-trip time of a laser pulse from the Earth to the Moon, and back to the Earth can be measured with only one clock but the experiment is clearly not local!

But what does local mean here? The text you quoted gives a clue: only special relativistic effects, i.e. the effects of gravity are negligible. This is crucial and I will take an example: the speed of light. From what I wrote above, we should only consider the measurement of the two-way speed of light, i.e. of round-trip times. Such a measurement gets rather meaningless if this speed of light changes with the time of the day, the day of the year, or the orientation of the light beam. So it is crucial to make sure that Special Relativity applies within experimental errors and therefore than the speed of light is truly a constant.

This is not so as soon as gravity is not negligible anymore. I will narrow my example further and talk about a classic experiments by Brillet and Hall [1], which is an improved version of the Michelson-Morley experiment. They use a Fabry-Perot interferometer and a servo-stabilised He-Ne laser but the exact details are not relevant here. Suffice to say that the whole apparatus is mounted on a 12 cm thick granite slab, which is rotated at constant speed in the lab, and the signal measured by the apparatus should not depends on the orientation of the table. Such a change would amount to the round-trip speed of light to change with the direction of propagation. So it should not change…

Except that it does! If the rotation axis is not perfectly vertical, the gravitational stretching will vary across the slab, and that is within the sensitivity of their apparatus. Even after taking this effect into account, they are left with a tiny anisotropy. In 2004, Klauber [2] explained it by taking into account the fact that the lab frame is not an inertial frame, i.e. that it is not in free fall.

So by contrast, a local experiment would ideally take place in free fall, which means aboard a space probe e.g. Moreover, even in free fall, the measuring apparatus could still be affected by tide effects, that is to say a tiny different of gravitational field from one end of the apparatus to the other end. So the experiment has to be compact enough. The more compact, the less affected. These effects can be computed using General Relativity, and this can be used to predict the maximum sensitivity of the experiment.

I hope this will be of interest to you. Feel free to ask questions of course.

Not the answer you're looking for? Browse other questions tagged relativity si-units metrology or ask your own question.

12
What's keeping us from simply redefining Avogadro's Number / the Mole as a definite integer?
9
Measuring the speed of light and defining the metre - absolute or relative?
5
Does the definition of the SI unit “second” require that possible perturbation of primary frequency standards should be measured?
65
What are the proposed realizations in the New SI for the kilogram, ampere, kelvin and mole?
19
Why is the candela a base unit of the SI?
14
What is a base unit in the new SI, and why is the ampere one of them?
0
Which luminous efficacy function does BIPM reference?