Forces acting on an aircraft during landing

I am currently busy with a project which involves the design of a landing skid for an unmanned aerial vehicle. I am currently underway with calculating the forces which will act in on the landing skid once it comes into contact with the ground. I have been reading up on the topic for quite a while but I have not yet found any information which can help me with the problem at hand.

The issue is that the design requirements only states an incoming velocity for the aircraft of 16 m/s at an approach angle of 14 degrees. So far the only logical way I am attempting to solve this is by modelling the aircraft/landing gear system as follow: 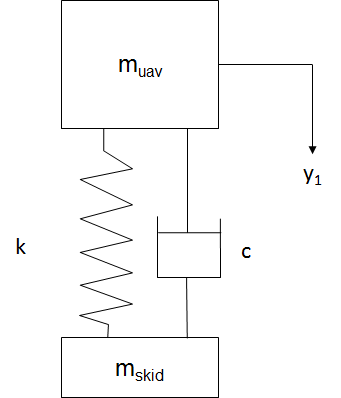 The issue that I have though is that I am to specify the damping and spring coefficients according to the expected force. When I attempt to solve the problem by using second order equations that I have way too many variables in order to solve it.

I came across a research paper however where the author simply calculated the force by stating F = (Change in momentum)/(Change in time) and assuming that the time over which the shock absorbers will compress will be 0.5 seconds. This doesn't seem like an accurate approach to me.

Any advice would be greatly appreciated.

It looks accurate enough for me. Since your plane is descending, it should have some vertical momentum. Since your plane should land in the end, the final vertical momentum should be zero. Now I assume this is where the inaccuracy arises: you need to assume the time taken for the spring to dampen the plane's descent. This should be pure assumption if you're not given spring choices or range. Just give a rough value that gives you a reasonable force. (Not one that is a few times the mass of the plane.)

Not the answer you're looking for? Browse other questions tagged newtonian-mechanics forces friction spring oscillators or ask your own question.