What happens when a voltmeter is connected across two parallel circuits?

I'm looking at question 4.6. I cannot understand how to make sense of this arrangement of voltmeter, let alone answer the question. Any help is very much appreciated.

You are supposed to use the fact that R1 and R2 are similar. Why?

In general, I want to know what happens when wires are connected across parallel circuits like this. And specifically, why should current flow through A and B? 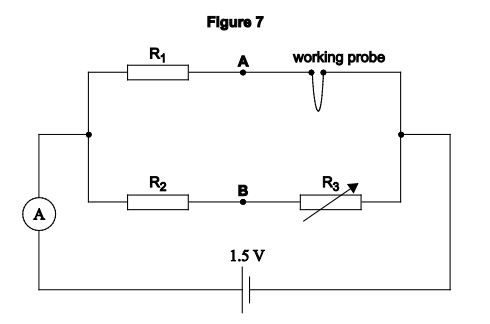 Based on various questions prior to 4.6, I believe (I didn't do the calculations, but presumably you did before you got stuck) that this is an "approximately balanced" Wheatstone bridge - that it, the voltage difference between A and B is zero (or very close to it). If that is the case, then adding internal impedance to the cell doesn't change things - there will still be a splitting of the current between the high impedance path (R2 and R3) and the low impedance path (R1 and the working probe), and the voltage between A and B will be a fixed fraction of the voltage between the ends of the bridge. An internal impedance of the cell changes the voltage on the bridge - but when the bridge is balanced that doesn't matter. It was zero - and it is still zero. This is because R1/R2 = Rprobe/R3.

The bridge is not exactly balanced in either case. Consequently there will be a non-zero PD between points A and B. The value of this PD is affected by the internal resistance of the cell, which will reduce its terminal PD, and therefore the PD across AB.

So I think the answer is that the PD between A and B, and therefore the reading on the voltmeter, does change when the internal resistance of the cell increases. I do not think "approximately balanced" is good enough to avoid confusion in an examination.

Futhermore, the question says "Explain without calculation..." I do not see how it is possible from the previous calculations to conclude, "without (further) calculation", that the bridge is "approximately balanced" - which is the only case in which a change in the terminal PD of the cell would not affect the voltmeter reading.

The increase in the resistance of the probe in Q 4.5 is also very confusing : are we to assume this increase applies in the bridge circuit, or that it is a hypothetical change?

It appears to me that the question is faulty and should not have gotten onto the examination paper. The fact which it asks you to explain (that the reading on the voltmeter "does not change") is not true and it is not obvious how anyone could know whether or not it is true "without further calculation". For an examination board with such a high reputation, this is very poor.

AQA has admitted faults previously, eg in June 2015, but I cannot find any acknowledgement of error in this case.

The mark scheme acknowledges that the bridge is not exactly balanced, and suggests that since the PD across AB is "very small" the voltmeter may not be sensitive enough to to detect the change. A very sensitive voltmeter or galvanometer is usually used in Wheatstone bridge measurements. The question gives no hint that the voltmeter might lack sensitivity, such as by asking why the voltmeter reading "might not" change, or that the change "might not be detected, instead of "does not change", which implies it will not change for any voltmeter.