In these previous questions (Lorentz contraction and magnetism), in order to understand how Lorentz contraction works, I was suggested to first understand “the Bell’s paradox”. But I found the reasonings to solve this paradox to be hard to wrap my mind around because it looks like it has many tricky mechanisms in one example. I needed to break it down to some simpler examples and I would appreciate any guides or hints on them:

Because the length contraction (in Bell’s paradox) seen from clock A and clock B is different and complicates the situation, I wanted to consider the objects as moving side by side. 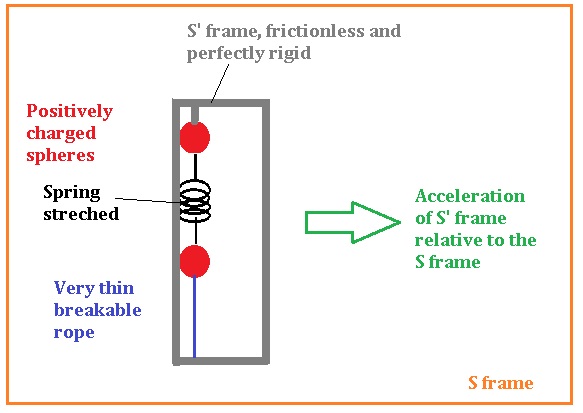 Two positively charged spheres attached with a spring between them so that the spring is streched to the point where it perfectly balances the repulsive force between the spheres. One of the spheres is fixed to the “wall” (or “the reference frame of the spheres” if you like) but the other sphere is tied to the wall with such a rope as in the Bell’s paradox. The spheres are of perfectly incompressable material and sitting on a perfectly frictionless surface (so we can ignore the off-topic details).

As these spheres accelarate, from their frame S’ there would be no magnetic force but from the frame S, there would be and the rope would break. It is stated that the rope must break so the frame S seems to be the “real” one. I can’t undertsand why this is so.

Also I can’t understand why we can’t state that, even if the spheres were stationary in the S frame (I mean, S and S’ frames were the same), if another object was passing with a high speed (in S frame) the rope would also break from it’s point of view ( S’’ frame).

How do we decide on which frame is the original one? How do we reason in choosing the frame in which the true/real result occurs (the rope breaks)?

Imagine we had two line currents (ignoring the rest of the circuit, return paths and the voltage source) of same direction and rotating in a common x axis with equal angular velocities. Assume that the distance between them is much larger than the wire lengths. 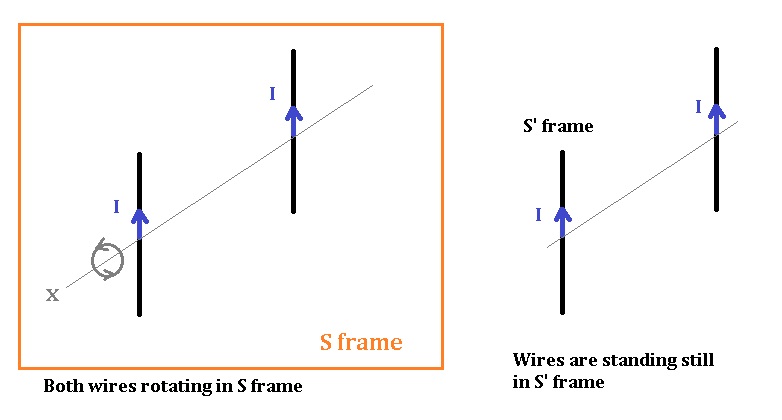 If we were sitting on a wire and rotating with it, in the S’ frame they would appear stationary to each other so there is no time delay and they would be exerting the full magnetic force on each other.

But in the S frame, they would look rotating and their EM fields arrive at each other with a phase delay, which means each one should be “seeing” the other as slightly backwards in time (and angular position). So there should be a little less magnetic force on each other due to the slight angular difference/delay between them.

I suppose, again the S frame gives the right result (If there was a streched spring and a thin rope as in Case 1, the rope would break). But what is the S frame? Is there a universal frame that we must stick to? I thought that the fundamental meaning of special “relativity” was that everything is relative and there can be no universally “pivotal” frame.

The right question to ask is how do different reference frames give the same results. 'Result' here means that something very concrete happens, a thread breaks, for example.

Knowing what happens is quite trivial: For example in your case 1, if anything happened it would happen without any good reason in one frame. So in all frames nothing happens inside that box where the two charges and the thread are.

So the problem we should be thinking about is: In the frame where the electro-magnetic force between the balls changes, why does the thread not break, or not even stretch just a little bit more?

Not the answer you're looking for? Browse other questions tagged special-relativity reference-frames thought-experiment or ask your own question.