Quantum numbers of visible-light bands in the emission spectrum of molecular nitrogen?

I was puttering around today while my students were doing a lab on the spectroscopy of hydrogen, and I took a look at the spectrum of a nitrogen discharge tube. This spectrum has some very visually spectacular bands that are easily observed. I've been pondering whether I could use this to do something educational and interesting in a future modified version of my lab activity. Before I could do that, I would like to understand the actual quantum numbers or physical interpretation of the bands I'm seeing. I've tried googling for information, but there is a vast amount of data on molecular nitrogen, most of it on infrared or visible transitions, and although I have some general idea about the interpretation, I haven't had any luck digging out any information on the specific transitions I'm actually seeing. Can anyone help?

The most easily observed band is a series of 7 evenly spaced transitions in the green to orange region. The wavelengths run from about 574 nm to about 606 nm. I came across this lab manual from the University of Michigan, in which the same transitions are shown in the left panel of figure 7. The right panelof the same figure (copied out of Eisberg and Resnick) shows a generic description of how this spectrum comes about for a diatomic molecule. We are apparently dropping from one electronic configuration to another, and the band arises when you vary the vibrational quantum number $v$ of either the initial state or the final state. Since the band terminates abruptly on the short-wavelength side, it seems that it's the $v$ of the final state that is varying. (Dropping to a final state with $v=0$ releases the maximum amount of energy.) So I would guess that in terms of the initial and final $v$, I'm seeing 0-0, 0-1, 0-2, ... 0-6. (I'm imagining that the initial $v$ would be zero because transitions within a vibrational band would have higher probabilities than transitions to another band.)

Can anyone help me figure out what the electronic configurations are, and whether I'm right about the $v$ quantum numbers? I also don't know if this is neutral N2 or the ion.

Here is our best attempt to capture the spectrum in a photo by holding a diffraction grating in front of a student's cell phone:

The band I'm referring to in this question, which is the clearest and easiest to measure through our spectrometer, is not actually resolved into individual lines in this photo, but it's the bright band running from green through reddish orange.

There is a photo here that is better but copyrighted.

I spent some time this morning working on figuring this out, and I think I pretty much have the interpretation now. My original interpretation was totally wrong. The most useful source of information is a long "atlas" paper by Lofthus and Krupenie, which is easy to find online (illegally, I suppose).

There are things called positive and negative bands:

So if I'm understanding correctly, it might be possible to test some of these interpretations by pointing the spectrometer or camera at different parts of a gas discharge tube. Looking at the photos from the hyperphysics web site (linked to in the question), I assume we'd be looking for a difference between the skinny waist of the tube and the fat ends. The lines all appear to be stronger in the waist, so this would support the hypothesis that everything we're seeing is from the neutral molecule (positive systems).

Lofthus's description seems to support this:

The whole visible region ... [is] dominated by the very strong First and Second Positive systems... and only under rather special excitation conditions can these systems be sufficiently suppressed to permit observation of weaker systems.

The pre-superscripts 3 are the values of 2S+1, where S is the total electronic spin. There is a selection rule $\Delta S=0$, which is broken by relativistic spin-orbit coupling; its approximate validity leads to the A state's being long-lived, so you get fluorescence in nitrogen, which may be present in the aurora. (The auroral stuff seems complicated and controversial.)

The $\Sigma$ and $\Pi$ specify values of 0 and 1 for the $\Lambda$ quantum number, which refers to the component of the electronic angular momentum along the symmetry axis. This is a good quantum number because of the symmetry.

Here is a level scheme from Wright and Winkler, Active Nitrogen: Physical Chemistry: A Series of Monographs, p. 14: 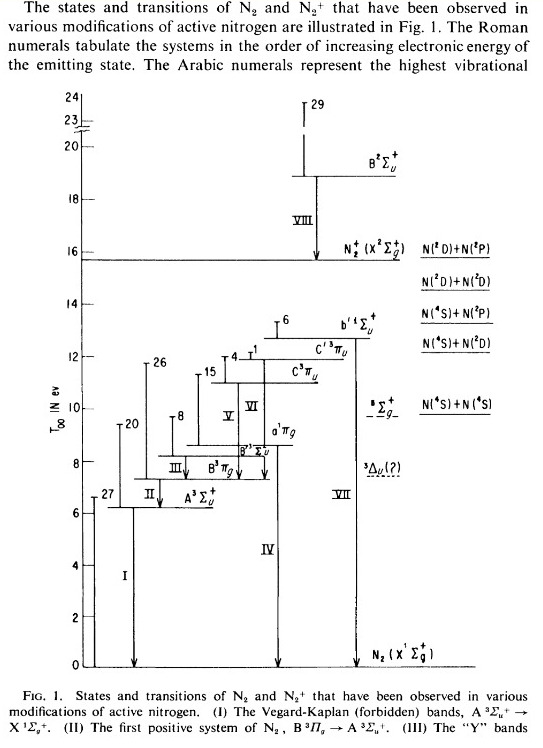 There are also quantum numbers $v$ (harmonic oscillator quantum number, 0, 1, 2, ...) and $J$ (angular momentum due to collective end-over end rotation, taking only even values because the molecule is homonuclear). We expect a vibrational energy $\hbar\omega_0 (v+1/2)$ and a rotational energy $J(J+1)/2I$. The latter is too small to be observable at the resolution I had available, but you can see the rotational states in the U Mich figure.

Nitrogen is unusual compared to other homonuclear diatomic molecules because its bond is very strong. The dissociation energy is 9.8 eV. This seems to be why you don't see similar band spectra in visible light in a discharge tube when you look at hydrogen or oxygen. In O2, for example, the dissociation energy is 5.2 eV, so I think a gas discharge is too hot to have much of the molecule, and you probably also can't get an electronic excitation of the molecule.

Looking at Lofthus's tables, I think I have pretty clear identifications of the red and green-orange "bands," which are the ones that I have accurate wavelengths for. These are shown in figure 7 of the U Mich lab manual. The scare quotes are because these turn out not to be actual bands.

I was wrong in my expectation that all strong transitions would have an initial $v=0$. In most cases, the inter-band transitions seem to compete quite strongly with the intra-band transitions (but not when there is a selection rule preventing it, as in A-X transitions). I was also wrong in interpreting the "comb" or "picket fence" spectra as being sets like 0-0, 0-1, 0-2, ..., i.e., transitions that all originated in a single state and terminated on different vibrational states. They are actually transitions of equal $\Delta v$, e.g., 12-8, 11-7, etc. If the harmonic oscillator frequencies were the same for all bands, then these would all have the same photon energy. Since the harmonic oscillator frequencies actually differ somewhat, the transitions have unequal energies, and spread out to make a "comb."

The highest transition rates occur for certain combinations of initial and final $v$. The h.o. wavefunctions give probabilities for the internuclear distance to have different values. To get a transition, you need the wavefunctions of the initial and final states to overlap. Since the equilibrium value of the internuclear separation isn't the same for different electronic configurations, you don't necessarily get the strongest overlap for $\Delta v=0$. The wavefunctions tend to have high probabilities near the classical turning points, just as you would expect from the correspondence principle, since a classical oscillator spends more time near the turning points.

I don't have accurate wavelengths for the other, shorter-wavelength stuff. But I observe some wavelengths in the 400-470 nm range, and these are too short to be from the first positive system. These may be from the second positive system, which lies in the UV and violet, or from the first negative system. Lofthus says, "The First Negative System is one of the most prominent band systems in nitrogen, and consists of numerous single-headed bands in the region 5870-2860 A... The bands are often overlapped by the stronger ...Second Positive System."

[EDIT] I had my students work on this as a lab exercise this semester, and I think we have the interpretation of the prominent red, orange, and green bands nailed down, as summarized in the table below. The right-hand column is from our work and also from measurements on a photo by R. Nave for the green band (which we weren't able to resolve). It would be fun to figure out the violet band as well.

4
Light emission spectrum units
3
Why are overtones forbidden within the harmonic approximation?
0
UV-VIS spectrometer on Solids
5
Understanding the Selection Rules of a Spin-Forbidden, Magnetic Dipole Transition in Molecular Oxygen
1
Is this a photograph of Surface Plasmon Resonance?
6
What causes the vertical bands of light in an aurora?
4
Why is blackbody radiation continuous?