I'm working a problem from Taylor's Classical Mechanics Book, and it's highlighted a couple issues I never quite wrapped my head around (despite getting good marks in advanced undergrad mechanics and EM).

Here are the questions:

a) Show that a spring obeying Hooke's Law has a corresponding potential energy $U = \frac{1}{2}kx^2$ if we choose $U$ to be zero at the equilibrium position.

b) If this spring is hung vertically with a mass $m$ suspended from the other end and constrained to move only in the vertical direction, find the extension $x_0$ of the new equilibrium position. Show that the total potential (spring plus gravity) has the same form $\frac{1}{2}ky^2$ if we use the coordinate $y$ equal to the displacement measured from the new equilibrium position at $x=x_0$, and redefine our reference point so that $U=0$ at $y=0$.

What I'm not clear about What I am not clear on is what we are actually doing mathematically when we "set $U =0$". I've thought of it several different ways and I've never been super clear on which is correct:

Edit it has been pointed out that this is faulty because the antiderivative of the force evaluated at a point is not by itself a potential.

2) Alternatively, we change our coordinate system such that we place the origin where $U = 0$. Assuming all potentials depend on position such that the potential is zero when $\vec{r} = 0$, this works nicely, but I don't know if there are exotic potentials that depend on $\vec{r}$ some other way.

My attempt at solutions

If I fix my coordinate axes such that the non-fixed end of the spring lies at the origin ($\vec{r}= 0$), we get that the work done to stretch the spring is:

So that works, but I'm not clear if I'm correctly "setting $U$ to zero at the reference point.

Finding the new equilibrium position is simple; I need to know when the force due to gravity is equal to the force of the spring; that is when

The next part is quite confusing to me; if we set our new zero potential to the new equilibrium position, and then the force on the spring is $mg - ky$, where $y$ is the displacement from this new equilibrium and I'm eliding the fact that these are vectors since we're constrained to 1-D movement. Then the potential for any given displacement is $\int_0^y (mg- ky )dy = mgy -\frac{ky^2}{2}$. But I'm trying to show that the total potential is of the form $-\frac{ky^2}{2}$. What am I missing?

Edit it was pointed out that the force exerted by the spring is actually dependent on its displacement from its resting length. Thus the potential should be $\int_0^y (mg- k(y-\frac{mg}{k})dy = -\frac{ky^2}{2}$

Any clarification on these topics would be greatly appreciated.

For the second part, consider the fact that the elastic force depends on the distortion of the spring in respect to the non-deformed state. So the elastic force is not given by ky where y is displacement from the new equilibrium.

This is the change in PE when the body is moved from 1 to 2.

The energy stored in a spring is the area under an applied external force against extension graph.

When a mass is used to extend a vertical spring you also need to consider the change in the gravitational potential energy of the mass $m$. 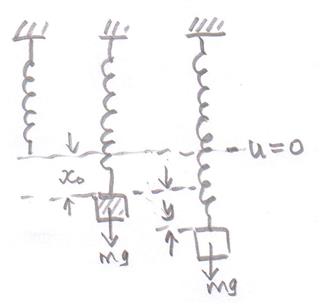 Changing the zero of potential energy to the equilibrium position requires you to add $\frac 1 2 k x_{\rm o}^2$ to the potential energies found above.