In this geometry of wavemeter, why do we use 3 mirrors instead of just 2 mirrors positioned 45° to each other to turn the light beam 180° around?

I found the paper which introduces that diagram, so this the conclusion of this answer is largely based on claims made in that paper.

Free versions of the paper's pdf are available at INIS and ResearchGate.

This is a bit long, and a lot of it is just a background about what's going on in that interferometer. The exact answer to the question's title is described in the last couple of sections.

Here's the picture from the question again:

First, a brief overview of the purpose and working of this wavemeter: it measures the wavelength of the beam coming from the place labelled "unknown".

The working is based on the principles of the Michelson interferometer (think of the Michelson-Morley experiment which showed that aether wind didn't exist... similar thing, same guy), and the design was largely borrowed from a system published by Hall and Lee, which can be found here in a reference cited by Fox et al.,

(Interestingly, the interferometer in that paper does not use 3 mirrors: it uses 2, according to the schematic. But that isn't a representation of the actual construction)

Simplifying a little bit, Michelson interferometers detect the wavelength of an electromagnetic wave by observing the interference pattern of the beam with a reflected (hence phase-shifted) version of itself. Imagine an arrangement similar to LIGO. 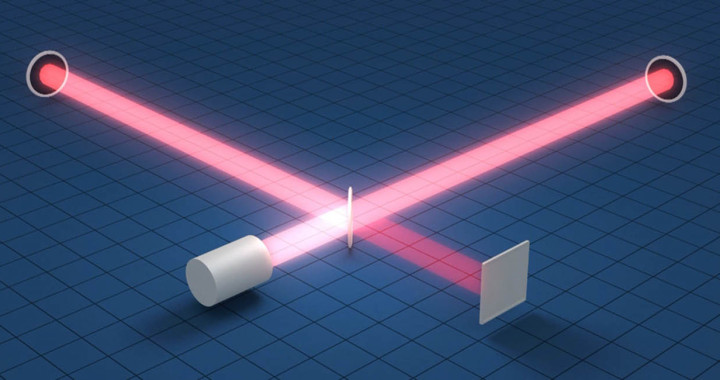 There are 2 perpendicular arms, each having a reflector at the end, a half-silvered mirror at the intersection, and sources/detectors on the other ends of the arms. Except in interferometers, we manually change the arm lengths, and observe the change in the interference pattern. The definition of 'arm length' gets a bit more complicated in this particular interferometer than it is in classical Michelson interferometers. But that's just geometric adding of lengths, so I'll come to that in a moment.

Anyways, changing the effective arm length leads to a change in the phase difference between the two beams. Some simple geometry and analysis of the superposition tells us that the number of fringes $n$ which cross a given point within the area of the spot (a good video of this, with an accompanying explanation is here) for a change in arm length of $\Delta L$ is $\frac{2\Delta L}{\lambda}$. Let's consider 2 lasers following the same path, one of which has a known wavelength. We'll subscript properties of that known-wavelength one with $R$, which means 'reference'. It's easy math again... creating separate versions of the aforementioned equation for the unknown wavelength and the reference one, we see $$\lambda = \frac{n_R}{n}\lambda_R$$Hence our interferometer must measure the number of fringes for both the known wavelength and the unknown wavelength under the same conditions and then we have our measurement.

In the diagram, there're 2 components labelled $CC1$ and $CC2$. Those are cornercube reflectors and they essentially reflect light back parallel to the incident beam. Try tracing the beam travelling towards $CC1$ from $M2$ (it's the upper one of that pair), and you'll see it gets reflected twice by 2 surfaces before travelling back. (Cornercube reflectors actually have some cool stuff about their functionality too). $CC2$ does something similar with the beam incident from $M5$. $CC1$ and $CC2$ are fixed together on a cart which can be slid on a track between $M2$ and $M5$.

Let's review the diagram now... There are 2 obvious light sources, and then there's a beamsplitter/half-silvered mirror, labelled BS. The areas labelled $N_U$ and $N_R$ are the places where you observe your interference patterns. If you examine the diagram, you'll be able to convince yourself that moving the cart along the track simultaneously shortens one arm and lengthens the other. This lets you make the whole system compact compared to a case where only one arm's length can be adjusted.

After that, you can slide the cart about, take the measurements needed from $N_R$ and $N_U$, and solve the equations form $\lambda$.

Let's get back to the purpose of the 3-mirror system; that's a sufficient description of the working of the interferometer.

An idea brought out in the comments under the question was that the 3-mirror arrangement prevents image flipping. Here's an image which describes how an object is flipped by a 2-mirror system but not by a 3-mirror system.

While this is potentially a reason why somebody would generally use 3 mirrors instead of 2 in a periscope or something, it doesn't seem to be relevant in this case.

Off the bat, having the HeNe laser's image and the unknown wavelength's images flipped upside down is obviously not an issue: if you look at any videos of interferometers (including the one I linked while describing the way in which fringes are counted; it's here again), you'll see that the patterns show radial symmetry (they're practically concentric circles). Also, the aforementioned paper by Hall and Lee used a 2-mirror system, so there's further confirmation that there's no theoretical complication.

Until now, we've proved that a 2-mirror system works perfectly fine, and was even proposed in the paper which this 3-mirror interferometer extensively cited as a good description of the concepts. We've also proved that there's seemingly no functionality difference.

Turns out that the mirror $M4$ is added "to ease alignment". M4 is the only stationary mirror in the whole setup. It can't be adjusted in any manner (no displacement, no rotation), unlike all the others:

In the middle of all that, $M4$ "corrects the geometry".

I wasn't convinced, so I decided to try to implement my interpretation of WetSavannaAnimal aka Rod Vance's idea from the comments... do 3 mirrors make the alignment easier? Let's do the geometry.

We'll use this diagram, where all the thick blue arrows correspond to lines parallel to the ground. The green curves indicate $A$. When $A=0$, the system is perfectly aligned. $\theta$ and $\phi$ are our adjustable angles.

Our setup, irrespective of the number of mirrors, will always have all mirrors unable to be shifted to different locations: their centers remain fixed. However, everything except for what is defined as $M4$ is capable of rotation around the an axis lying flat upon the surface of the mirror, perpendicular to the plane which all possible incident rays lie on. $M4$ is stuck perpendicular to the ground. The other 2 mirrors have to be directly on top of each other, i.e. if the beam from $M2$ to $M5$ superimposes over the $x$ axis and the $y$ axis is perpendicular to your screen, both rotatable mirrors ($M3$ and $M5$ and the equivalents from the 2-mirror system) will have the same $x$ and $y$ coordinates: only their $z$ positions differ. These are mechanical constraints for the system and cannot be violated in this case. This is a safe assumption as it would be impractical to implement provisions for additional degrees of freedom: doing so would make alignment extremely difficult by creating a huge number of variables.

An easy test to understand this is to try out $\theta=\phi=\frac{\pi}{4}$. We know that should work. And sure enough, we get $A=0$, which means the ray superimposes over the line parallel to the ground. The partial differential equation shows that for a tiny change in $\theta$, $A$ will vary by double that change. The sign means that if you increase $\theta$, $A$ decreases. Easy enough.

Then, consider the 3 mirror system.

A quick, superficial analysis: intuition matches with the math which states that $A=0$ whenever $\theta=\phi$. Also, there're an indefinite number of solutions, all of which exist for different vertical distances between the 2 adjustable mirrors and the fixed one, within reasonable things like considering angles between $0$ and $\pi$. The signs of both partial differentials are different, so for one of them, an increase results in an increase in $A$, while for the other, an increase causes a decrease in $A$.

However, this is thoroughly inconsequential. We eventually didn't prove an advantage of the 3-mirror system: in all cases the coefficient is 2, and the sign doesn't really make a difference.

The disappointing, unsatisfying answer is that we'll have to take the words of the author and go with "makes it easier to adjust". I imagine it becomes more pronounced when you effectively try to implement it, but I was hoping for something a bit more exciting.

To clarify something else from the comments, which was about how the asymmetry of a diode laser's beam can distort the interference pattern... That's one of the reasons the HeNe laser was chosen. As noted in the paper which contained that image, the usage of diode lasers requires Faraday isolators, to restrict the directions of passage of the light.

As pointed out in user Chair's answer the authors of the paper: "A reliable, compact, and low-cost Michelson wavemeter for laser wavelength measurement" (.PDF) say: "Mirror M4 is added to ease alignment as explained later." and "Mirror M4 does not need to be adjustable and is present only to correct the geometry so that the beams overlap.". - The "unsatisfying answer is that we'll have to take the words of the author ...".

A little more research turns up this:

"Sagnac interferometers are, to first order, insensitive to any static or low-frequency displacement of their optical components, nor are the fringes affected by minor frequency variation in the lasers or birefringence. A zero-area variant of the Sagnac interferometer has been proposed for third generation LIGO. Fig. 1 shows how by directing the light through two loops of opposite sense, an effective area of zero is obtained. This variant of the Sagnac interferometer is hence insensitive to rotation or low frequency drift of its optical components, while maintaining a high sensitivity to transient events of astronomical interest. 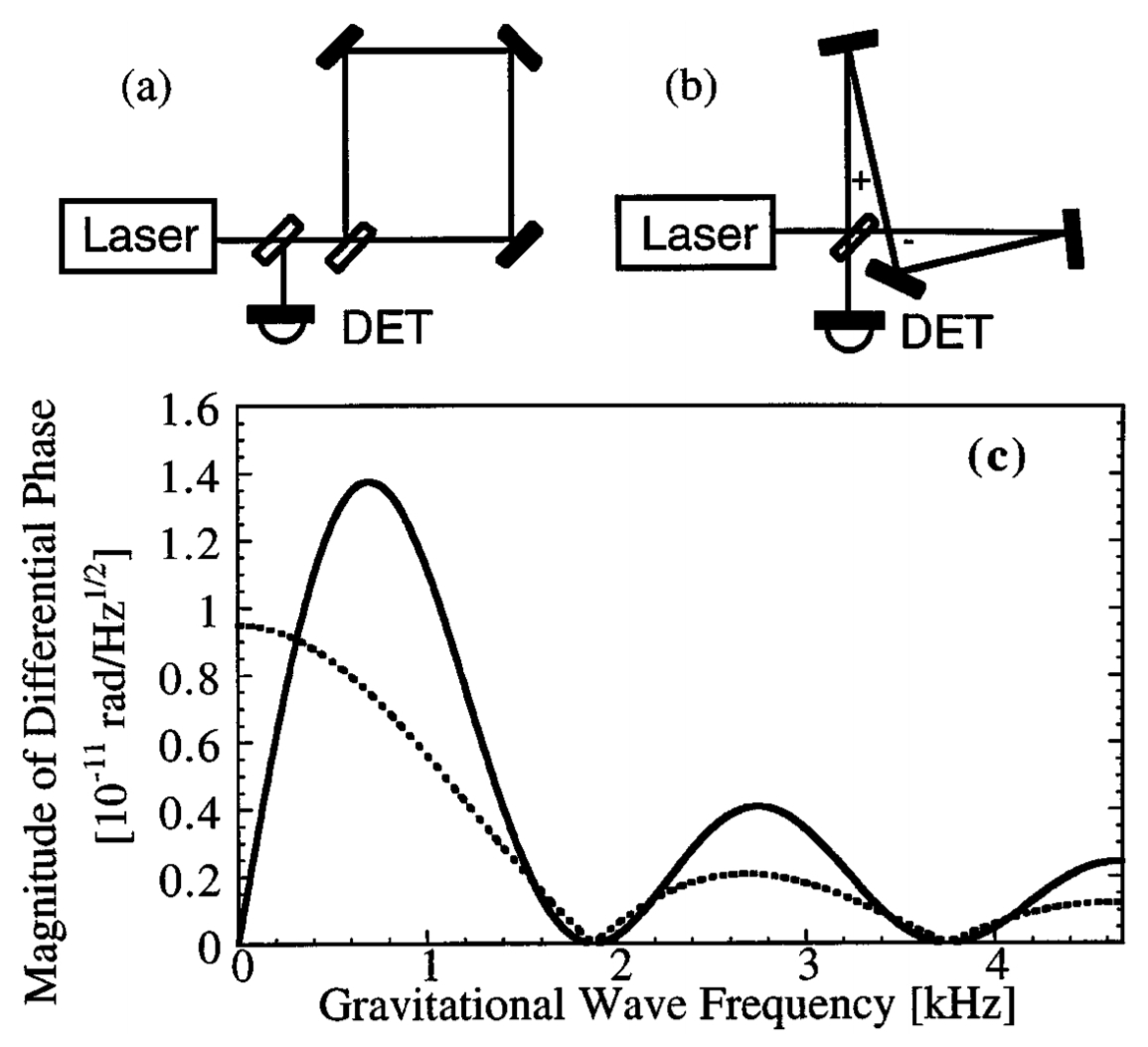 "FIG. 1. (a) Conventional Sagnac interferometer. (b) Zero-area Sagnac interferometer for displacement sensing with a geometry that meets LIGO requirements. (c) Theoretically calculated differential phase generated by a gravitational wave with strain $h_g ~ 10^{-23} / \sqrt{\text{Hz}}$, in a 20-bounce (bounce number $N ­= 20$) delay line, 4-km arm-length, zero-area Sagnac interferometer illuminated with a 1064-nm laser. The Michelson interferometer response (dashed line) is shown for comparison. The Sagnac response peaks at 690 Hz and has a 3-dB bandwidth of 220–1250 Hz. Assuming a 75% system efficiency, detection of a differential phase at the shot noise limit of $10^{-11} \, \text{rad} / \sqrt{\text{Hz}}$, requires ~ 5 kW of laser power on the beam splitter. At this power level, the shot-noise-limited strain sensitivity falls to $10^{-22} \sqrt{\text{Hz}}$ at $f_g \approx 32$ Hz, a frequency at which seismic and thermal displacement noise will dominate.

If you only had mirrors M3 and M5 there would be nothing to oppose their misalignment with the counter-propagating beams. The use of M4 opposes any slight misadjustment by oppositing the error of M3 and M5; instead of their misalignment adding it is subtracted.

The most obvious reason for three mirrors is to do with reflection parity.

On the left-hand side, you have a single mirror reflecting. On the right, you would then need an odd number too, which is why they opted for three mirrors.

Not the answer you're looking for? Browse other questions tagged optics reflection geometric-optics interferometry or ask your own question.

3
Redirecting light beams from beam splitters
4
How does this trick with mirrors work?
33
Why did high quality mirrors use aluminum coatings instead of silver?
2
Is it possible to save the light?
4
Can many small and far curved mirrors focus light just like as 1 big curved mirror?
0
On the optical equivalent of the Michelson interferometer
0
Why is it harder to use a white light source in a Michelson Interferometer?