With a lab waveguide / horn antenna setup similar to image (without bends), we made the following measurements. Now we thought this could be used to demonstrate the observation of the inverse square law, but can't see how(?)

Signal was about 10GHz.

Converting dB to power ratio, we get -1.1dB = 0.78 comparing first two values. Then thought a power ratio based on distance only (P2/P1 = d1^2/d2^2) could confirm that measurement. But this seems not straight forward at least by the measuring points used. So what is the problem / how should this be solved? 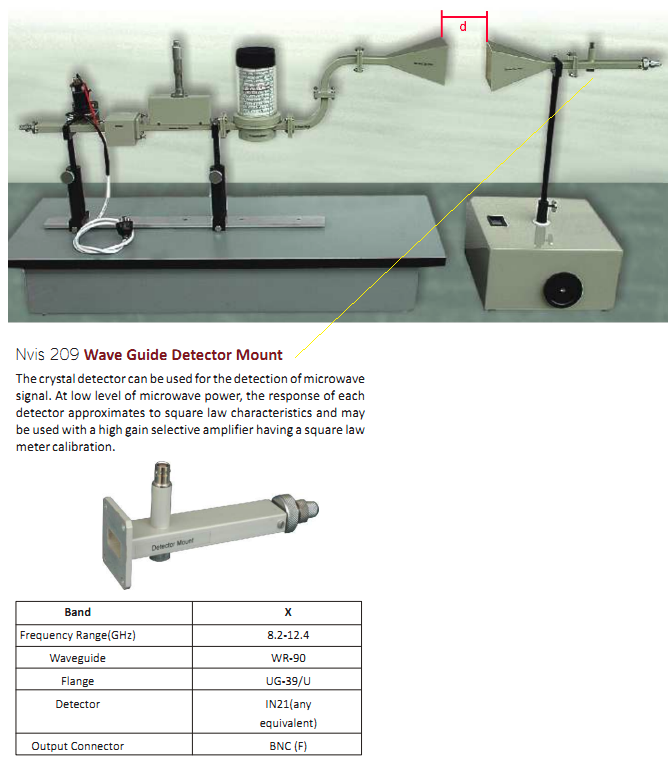 You won't see the inverse square law with a setup like that unless you measure for distances that are much greater than the Rayleigh Distance for the horn. Roughly your horn antennas need to look like point sources / receivers and Fraunhofer (farfield) diffraction needs to prevail. At the separation in the photograph, the received power will be almost independent of $d$ over quite a range, which is what your data are telling you: this should be intuitively clear. I'm not sure that measuring the VSWR from the reflected wave will be accurate enough at the distances you will need.

Also note that, with a setup like yours where you are measuring the power reflected by a distant object, the farfield dependence is not $1/r^2$ but $1/r^4$ - your setup is somewhat analogous to a radar. In the farfield, the scattered power is proportional to $1/r^2$. But the fraction of the scattered power received is also proportional to $1/r^2$.

Given that the wavelength of the microwaves are about 3 cm and the aperture size of the horn is probably about 5 cm, the Rayleigh distance is about 4 cm.

So there is a chance that the experiment can be used to illustrate the inverse square.
It might be better to use a diode probe without a horn as the receiver which will reduce the chances of a standing wave pattern being set up between the transmitter and the receiver?
To this end also try and make sure there are no objects which might reflect microwaves around the apparatus including those doing the experiment.

As with similar experiments eg gamma radiation, ultrasound etc where the exact position of the "point" source is not known the standard method is say that the measured distance $d$ between two fiducial marks on the apparatus has a constant error $e$.
The correct source receiver distance is $d+e$.

A plot of $d$ against $\frac{1}{\sqrt I}$ should give a straight line if the inverse square law is being followed and the intercept will give a value for $e$.

As has been pointed out by others you will probably need to improve the accuracy of your detector reading and take many more readings.
The importance of this is shown by the analysis of the data which you have presented leading to an excellent straight line if the first point is ignored!!! giving a very strange value of intercept $e$!!!

If the inverse square law is not followed then other relationships could be investigated.

Not the answer you're looking for? Browse other questions tagged electromagnetism waves antennas microwaves waveguide or ask your own question.