Tension force, acceleration of the system

As the drawing shows, two blocks are connected by a rope that passes over a pulley. The first body, $m_1=600g$, is lying on a flat surface, while the second one, $m_2=200g$, hangs freely off the surface. If the friction is ignored, we have to find the tension force in the rope. 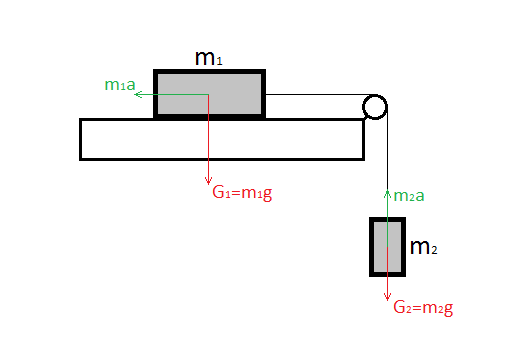 This is where I get confused. What does that acceleration $a$ represent? The way I see this picture is that the first body is moving left and pulling the second one up.

The diagram doesn't match the situation presented in the question.

There is no way that the block $(1)$ will move towards the left, unless there is some pulling force acting on the block towards left.

$'a'$ represents the acceleration of the system. I am assuming only positive values of $'a'$ in my answer.

Case I, When a pulling force is present :

If there was some pulling force (towards the left) then the equations for getting the acceleration of the system would be as follows :

If the system wasn't acted upon by any external pulling force we would get the following equations,

In the absence of pulling force, the equation presented by your teacher is correct but the diagram associated with it is wrong.

If the blocks were actually moving left then the value of the pulling force have to be provided, if the tension is to be calculated.

Summing it up, the direction of the acceleration given by your teacher is inconsistent with the question.

Not the answer you're looking for? Browse other questions tagged homework-and-exercises newtonian-mechanics forces acceleration free-body-diagram or ask your own question.

9
Why does the tension on the pulley in an Atwood machine not equal $(m_1 + m_2)g$?
0
Two-block system acceleration when applying a force in the $x$ direction
18
Pulley system. Why do I need to put a minus sign?
0
Is tension equal to the weight of another object?