I am programming a space game, and I put this on the physics stack exchange because I need some help in the physics behind it. Let's say there is a moving enemy ship - referred to as "target", and we want to lead our ship's torpedo to a point where the bullet will intercept the moving target. Before we go on further, let's assume some constraints:

The motion is constant in terms of the space game server I am running, I will factor gravitation later and angular velocity for the best result. For now, let's break down the variables we know:

Ship (Torpedo to be specific) :

Now that I have covered that, let's state what we need to figure out:

Here are the steps I am taking: 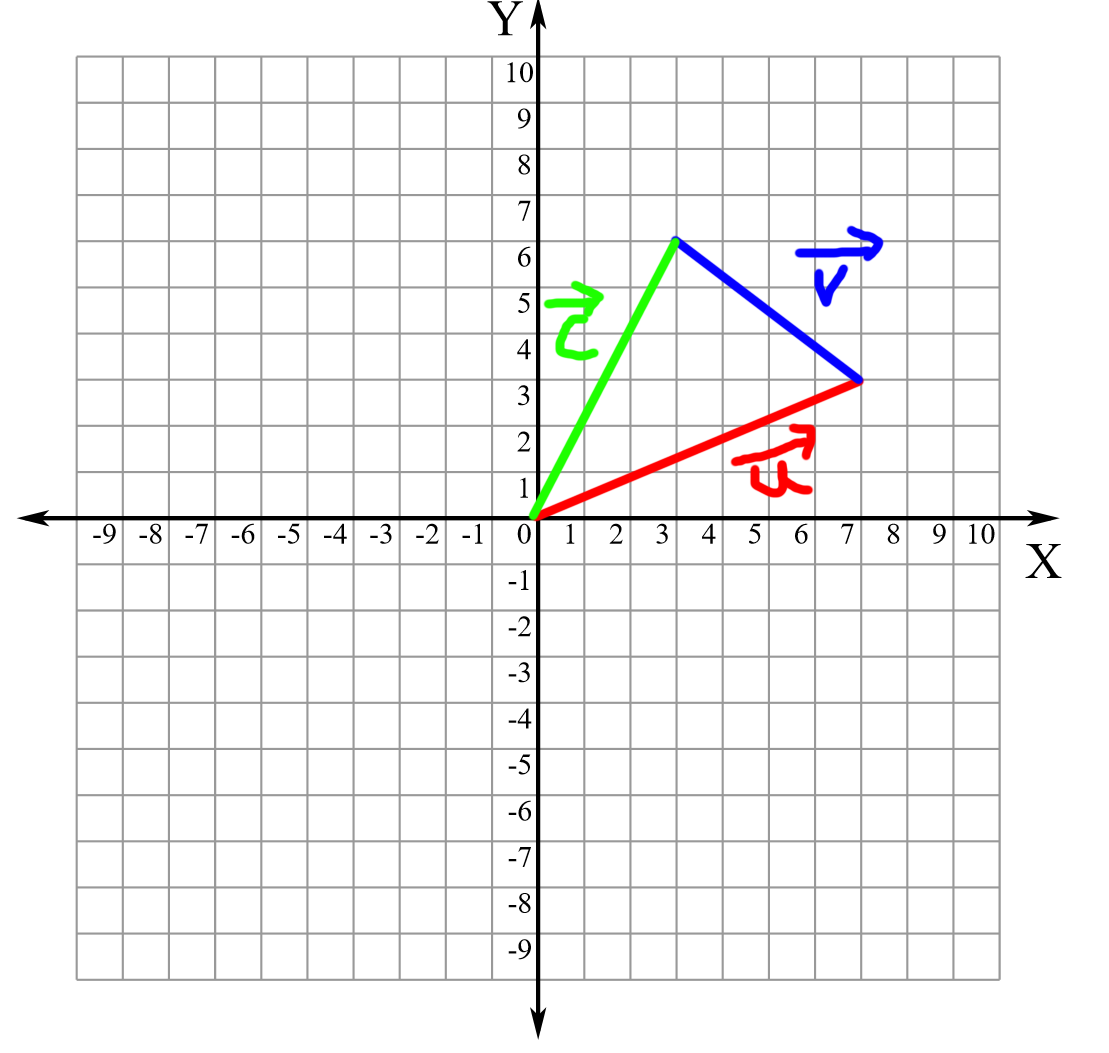 We have several vectors here - U, V and C. Our origin is our ship (the torpedo).

My program already has a Vector class, so there shouldn't be any worry in implementation. This is in Java btw. (Again, I put this in a physics forum to talk about the physics of what's going on).

In my program, I can easily calculate the distance between the ship and the target's initial position using a head minus tail rule. In this example, Vector U is <7,3>.

Vector V on the other hand is the troubling part. Vector V is a vector from it's predicted final position to it's initial position. The question is : how do we find this?

(Pt)f is a vector, (Pt)i is a vector, Vt is a vector and time is a scalar. If you think about it, I'm doing a vector addition of two position values (You can think of Vt*time as a position vector as a result of velocity scaled by time).

I am concerned with finding T though. Here's what I know:

The problem is, this is Time, a scalar quantity. How do I find that? I can't just divide two vectors. Vb-Vt is just vector subtraction. How do I divide that from the vector (Pt)i?

Additionally, is this the correct approach? In the end, I can create vector V in my diagram by finding a vector between (Pt)f and (Pt)i. Then, once I have that, I can find the point of intersection by adding vector U and V. Then I have to convert that point to world space (remember origin is top left at (0,0)). I have a function that will rotate my ship towards that point and shoot in that point's direction.

Let me know if I have to be more clear, and thanks for the help!

In problems like this it is usually very convenient to set the time as additional dimension of your vector space. In this case you make your 2D problem 3D with the $z$-component actually being time. Solving your then 3D vector equations gives the time immediately as 3rd component.

Not the answer you're looking for? Browse other questions tagged kinematics vectors projectile simulations displacement or ask your own question.

8
What is displacement? Position relative to a reference point or change of position
4
Solving for initial velocity required to launch a projectile to a given destination at a different height
2
Calculating vector to aim for moving asteroid (3D asteroid game)
0
Question about inertial reference frames
0
If a bullet is shot up in the air off a cliff, will the final velocity be greater?
0
Powered interception of a moving object
0
How can a horizontally fired bullet reach the ground the same time a dropped bullet does?