Why are thin soap bubbles colorless?

I read here that:

The colors of a bubble are dependent on the thickness of the film. A bubble becomes thinner and thinner as it dries out (due to evaporation), before finally popping. As the surface film of the bubble becomes increasingly thinner, a change in overall color can be seen. Thick walls cancel out longer wavelengths in the red range. As the bubble film gets thinner, yellow wavelengths are cancelled out. As it gets even thinner, green light is lost. Beyond this point, even shorter wavelengths in the blue wavelength range disappear. The resulting colors are a combination of the colors that do not undergo destructive interference and their degrees of constructive interference. Blue-green colors dominate in thicker films and yellow hues in thinner films. Eventually, the film becomes too thin to create interference of visible wavelengths, as all wavelengths are cancelled out. At this point the bubble appears colorless. Against a black background the bubble surface could appear black.

I know that this is a bit of a simplification because the length of the path depends on the angle of incidence too. The part that I don't understand is that when the film becomes too thin eventually none of the visible wavelengths should cancel out - not all, as written in the text. Is this an error in the text or am I understanding something wrong?

The condition for constructive/destructive interference is that the optical path difference, $\Delta$, is a integer multiple of half wavelength. In particular, the destructive interference happens when $\Delta=n\lambda$, for some integer $n$, since the external reflection (air-water interface) gets a phase inversion whereas the internal reflection (water-air interface) does not.

In a thin film interference, the optical path difference is twice the thickness of the film. If that thickness is much smaller than the wavelength, the phase difference between the externally and internally reflected waves is due to phase inversion of the external reflection only. This will result in a destructive interference. That is what the following part means

Eventually, the film becomes too thin to create interference of visible wavelengths, as all wavelengths are cancelled out. At this point the bubble appears colorless. Against a black background the bubble surface could appear black.

As a nice example, see the figure (credit: http://www.animations.physics.unsw.edu.au/jw/light/soap-bubbles.htm) 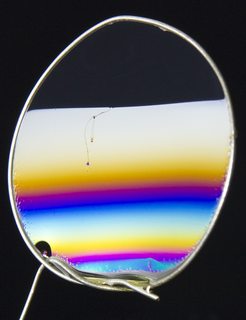 5
What is the sun's spectral series?
7
Why do we see brown light?
0
Can interfering rays of light be non-coincident?
2
Anti-reflection thin films
2
Why do the LINES in a vertical soap bubble get thinner as we go down?
1
Human colour perception – summary needed
1
Why does $\rm TiO_2$ require less thickness for thin-film interference than light wavelength suggests?
1
Black body radiation: why can it glow yellow?