What's chiral about the Dirac points in graphene?

One of the main interesting properties of graphene is the appearance of Dirac points in its energy band structure, i.e. the presence of points where the valence and conduction bands meet at conical intersections at which the dispersion is (locally) the same as for massless fermions moving at the speed of light. 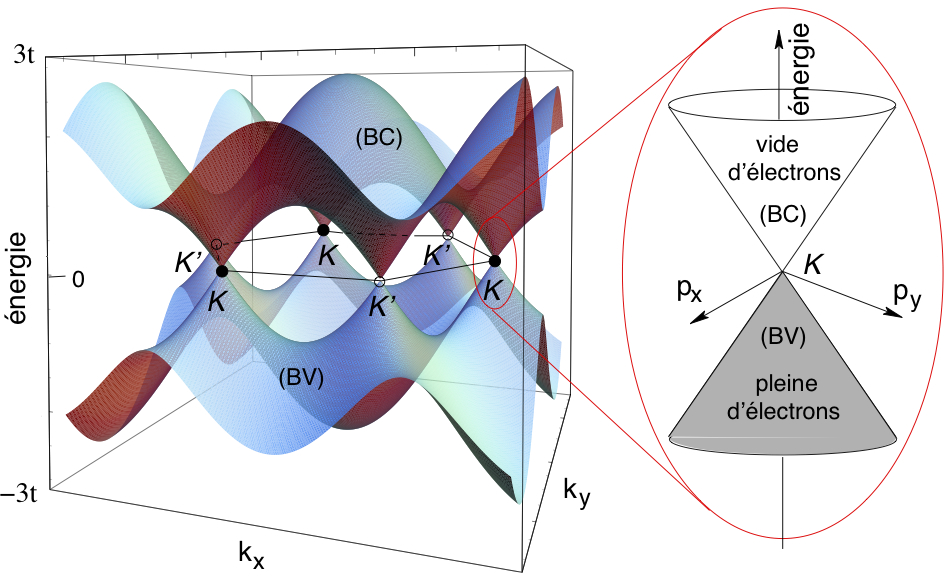 These Dirac points occur at the vertices of the standard hexagonal Brillouin zone, and they come in two sets of three, normally denoted $K$ and $K'$. Surprisingly, however, these two sets (despite looking much the same) turn out to be inequivalent: as far as the lattice translations know, the three $K$ points are exactly the same, but there's nothing in the lattice translation symmetry that relates them to the $K'$ points.

Even more interestingly, these two Dirac points are generally referred to as having a specific chirality (as an example, see Phys. Rev. Lett. 107, 166803 (2011)). Now, I understand why the two are not fully equivalent (as a simple insight, if you rotate the lattice by 60° about a carbon, you don't get the same lattice, which you do after 120°) and why they're related by a reflection symmetry (obvious in the diagram above, and also by the fact that if you tag the two inequivalent carbons as in this question, a 60° rotation is equivalent to a reflection on a line); since the two are inequivalent but taken to each other by a mirror symmetry, I understand why the designation as 'chiral' applies.

Nevertheless, I normally associate the word chiral (when restricted to 2D objects) as something that can be used to fix an orientation of the plane, or, in other words, something associated with a direction of rotation of that plane, and this is where my intuitive understanding of these $K$ and $K'$ points stops. So, in short:

Similarly, and more physically, what is it about the $K$ and $K'$ points that makes them respond differently to chiral external drivers, such as magnetic fields or circularly polarized light?

I know, this question is a bit dated but I stumbled across the same problem and would like to share my insight. If you have found an answer yourself, please provide it, I would be highly interested.

As you pointed out yourself, there are two sublattices and the honeycomb lattice itself is not a Bravais lattice. To construct the graphene lattice, you would use a unit cell containing two carbon atoms. Those two inequivalent atoms give rise to an additional degree of freedom (Is the electron at site A or B?). It is often refered to as pseudospin as it can be treated mathematically in the same way as the spin-1/2 property. This is the point where chirality comes in to play: In graphene, the direction of the pseudospin is linked to the direction of the electron/hole momentum. An electron's pseudospin is parallel to its momentum and for holes, it is antiparallel. Hence, the electron and hole states are called chiral states.

To sum it up, the two sublattices give rise to a spin-like property which is called pseudospin and which is linked to an electron's/a hole's momentum. This is why the property of chirality is introduced. A good read for more detail are these two articles:
https://www.nature.com/articles/nphys384
Lecture on Graphene's electronic bandstructure and Dirac fermions

Not the answer you're looking for? Browse other questions tagged condensed-matter symmetry graphene chirality or ask your own question.

10
Why do electrons in graphene behave as Dirac fermions near the Dirac points?
3
How to determine the orientation of the massive Dirac Hamiltonian?
8
Why do edge states in graphene exist between the valence and conduction band?
1
Inversion symmetry points of graphene
3
Is the Berry curvature in perfect monolayer graphene zero?
2
How to determine the degeneracy of an energy level for a periodic quantum system from its band structure over the Brillouin zone?
1
How to make sense of the multiple bands obtained for multiple-atoms-per-unitcell crystals, such as graphene?
0
$4\times4$ Dirac Hamiltonian in Graphene