How will a particle moving off its mass shell appear/behave if it is observed in the real world?

Edit: my question is not directly about Feynman diagram, but instead about the nature of off shell objects, were they as common as the on shell ones. I am trying to suggest that if an electron goes off shell in a suitable way, then it will be impossible to tell it apart from muon. Again, i have no intention to directly refer to internal lines in Feynman diagram.

But how do we measure the rest mass of a particle for the first time?

We measure it by using the formula $E^2-p^2= m^2$. (We accelerate the particle in a known electric field, measure the acquired velocity and then calculate the mass using the equations of Special relativity.)

Now, thankfully, in everyday life, when we repeat this experiment, we get the same value for the mass, making us believe that the rest mass is a constant.

In other words, according to my argument, muon can be considered as an electron moving off shell.

Virtual particles are a mathematical shorthand in a specific method of calculating the fundamental interactions of particles. This Feynman diagram will make it clearer:

Only lines entering or leaving the diagram represent observable particles. Here two electrons enter, exchange a photon, and then exit. The time and space axes are usually not indicated. The vertical direction indicates the progress of time upward, but the horizontal spacing does not give the distance between the particles

It is only the incoming and outgoing particles that are on shell and real and can be measured. The internal lines are under the integral which is implied by the Feynman diagram, and thus the four vector assigned to the internal line varies within the limits of integration. It is called a photon in this case, because it carries the quantum numbers of the photon, but not the mass, which is off shell. Particles keep the name when they become internal lines after a vertex, because of conserving quantum numbers,lepton, baryon, charge, etc.

Here is the crossection of e+e- scattering ( see link for details) showing the resonances seen. 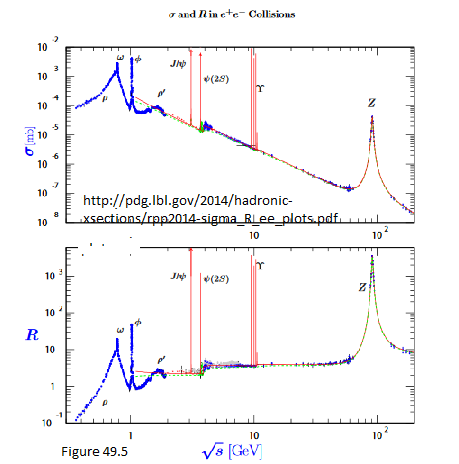 The effect of the propagator accompanying a virtual particle is seen clearly. At the mass of the Z there would be a delta function except for quantum mechanical indeterminacy, but there is a contribution of a Z virtual exchange ( we only see the external lines of the Z decay) even far off the mass of the Z. It does not turn into something else. Far away from the mass value of the peaks, the contributions of all these resonances add up, except they become fast very small. There is no confusion of masses.( I have used the Z as an example because it is an elementary particle, but resonances also like j/psi and rho etc can be mathematically described with a virtual line and a propagator).

Not the answer you're looking for? Browse other questions tagged quantum-field-theory special-relativity mass-energy virtual-particles or ask your own question.

44
Why do many people say that virtual particles do not conserve energy?

0
Does this photograph portray double muon impact with nanogold atoms?
44
Why do many people say that virtual particles do not conserve energy?
23
Can virtual particles be thought of as off-shell Fourier components of a field?
6
Why does an electron react differently to a virtual photon in the interaction between two electrons and between an electron and a positron?
1
Can the Doppler effect account for the increase in an object's energy with velocity?
2
Free (unbound, so not bound to a nucleus) accelerated electron cannot emit/absorb a real photon?
1
Proof of forbidden free electron-photon absortion using spacetime diagram