I have a household fridge with a normal freezer section.

I have two identical bottles of inexpensive white wine at room temperature.

I have a mixing bowl, I put a liter or so of tap water in it.

I open the door once fairly briefly and

With bottle A I do this, 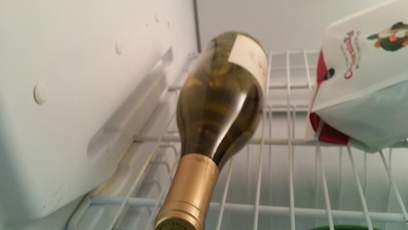 With bottle B I do this, 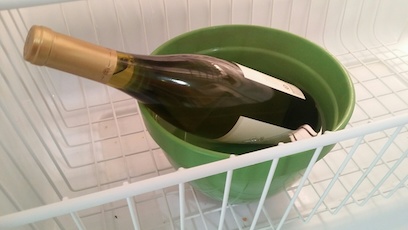 Later - say 10 to 20 minutes later (long before anything has frozen) - I pour the wine in to glasses.

Which wine got colder more quickly?

Part B (a completely different problem):

That was room temperature water. Say I have a bowl of water that is already about as cold as the air in the freezer (is that possible? how cold is air in a freezer?) In that case, which one wins?

(ie, which "transmits cold" to the bottle faster, air or water at same temperature?)

Please note that as it says above

long before anything has frozen

Ice is not involved here.

Cooling the wine is tricky: you have to cool it "through" the bottle. How do the thermal properties of glass affect things? For example, is it even "worth" cooling the glass quickly?

What, really, cools things in a freezer? (Say, the bag of vegetables there.) In fact, is it the air? Or in reality is it just the other small surfaces (the racks, etc.?) If it was floating in a perfect vacuum, would it cool at all?

In part A, the bottle in the water will cool slower because you must remove the heat from the water and the wine. The bottle on the shelf will cool faster because all you have to cool is the wine.

In part B, if you have water with a touch of salt, it will not freeze at zero Celsius and the water will remove the heat from the wine faster, the larger surface area of the water coupled with some evaporation that cools the water will cause it to cool significantly faster than the dry bottle on the shelf.

In a third scenario you didn't consider, which I believe is the fastest way to chill a bottle of wine, you wrap a bottle in a very damp rag and place it in the freezer. The water in the rag will begin to evaporate and draw the heat out of the bottle quite quickly between evaporation and convection.

Stop drinking cheap white wine and you won't have to chill it to confuse your taste-buds into liking it...

Liquid water has a few interesting properties that we need to discuss before answering your questions.

2) It also has a pretty high thermal conductivity. Thermal conductivity is a measure of how fast energy moves from the warm side to the cold side of an object, and it has units of $\frac{W}{mK}$ (remember, Watts are Joules per second). It turns out this is a super complicated calculation in reality (materials have different conductivities in different directions), but this is a good approximation for this problem.

3) Thermal contact between objects is also quite complicated. Broadly, objects thermally interact by radiating, conducting and convecting (forced and natural). 3a) Radiation happens all the time, and it's how the Sun gets heat to the Earth - all objects emit photons in every direction at a wavelength consistent with the their temperature. Radiation is related to surface area. 3b) Conduction is when two objects are in physical contact and they share energy at their interface. Conduction is also related to the surface area. 3c) Convection is when a fluid moves over the surface of a solid (or when a gas moves over the surface of a liquid). If a solid has a vertical interface with a fluid, the boundary layer of the fluid will move up if the solid is hot and down if it's cold which is called natural convection. Forced convection is when currents in the fluid move over the surface (as with a fan, a breeze or a flow). Convection scales with the surface area of the interface.

All three of these are pretty complicated which is why you've received so many answers that feel like educated guesses. Last, until the whole bottle reaches thermal equilibrium, the freezer will be colder than the glass which is colder than the wine.

A) Wine bottle on rack vs. wine bottle in water: With the tap water at room temperature, the free bottle will be cooler because water has a very high specific heat that insulates the wet bottle. If you got a thermally conductive container with less water, but more of the bottle's surface in contact with the water, you would cool the wet bottle faster, but the geometry of these things is really important, and that is the wrong bowl.

B) Getting water colder than freezing typically changes it to ice. You can lower the freezing point a little by adding alcohol, or a lot by adding table salt. The thermal conductivity of ice is half that of water, so I'll assume that we salted the bowl, and then the wet wine would cool much faster because while the interfaces are the same, the water can accept more heat without changing temperature as much as the air.

C) "Cooling wine is tricky": Not sure what you mean by tricky - you put it in thermal contact with something colder. Glass insulates the wine, but it has a much lower heat capacity and it's a not that thermally conductive. The only way to get the wine cooler than the glass is to take the chilled bottle out of the freezer and leave it in a warmer environment.

D) How freezers work: Freezers pressurize a fluid, expose it to the room temperature and then allow the fluid to de-pressurize it in thermal contact with the inside of the freezer. Feel a bike tire while you let a lot of the air out, and you'll see what I mean. There's typically a fan that pushes air over the pipes/radiator and into the main chamber because it cools the contents more quickly. I leave it as an exercise to decide which of the mechanisms for heat transfer apply here.

In the second case, I assume that the water indeed remains water for the 10-20 minutes that you're talking about and doesn't freeze. A pinch of salt might prevent it from freezing. The temperature gradient is same for both water and air but comparing the conductivities leads us to conclude that the chardonnay in the bowl will cool much faster. If the water did freeze to ice, it would still cool faster than when it was in air. But you would need some quantitative data to find out whether ice or water at same temperature cools down the bottle faster. Though I did mention that ice conducts heat faster, you must realise that the area of the bottle in contact with ice is less than when it was in contact with water. Crushed ice might solve the problem though.

In the first case, there are opposing factors.

1) The water is at room temperature. So, the temperature gradient of the wine-water system is quite low, compared to the wine-air system.

I'm not entirely sure but Dirac might be right, because water is too good a conductor compared to air.

Aside: Glass is a very good thermal insulator. So it will slow down the heat transfer in both cases, though it doesn't really affect the answers. Also, I believe it's the air which cools down the stuff in refrigerators. If stuff were to float in a perfect vacuum, heat conduction would be zero. Perfect vacuum means there are no molecules to keep the heat flowing. Perfect vacuum has zero thermal conductivity. I hope this answers your question.

The back of a fridge is colder than the front. Cool air sinks so the lower area would be cooler in that sense.

But obviously a bottle in contact with cold water will cool quicker than a bottle that relies on cold air to get cold.

So I would guess bottle B.

Tip. Put the wine glasses in the fridge so you don't pour the cold wine into a room temperature glass.

1
Could the contents of a bottle affect the surface temperature of that bottle?
2
Calculating temperature of water in the freezer
7
What's the best strategy to fully fill the fridge with beer bottles and have them all cooled?
6
How can ambient cooling cool a system to below the ambient temperature?
2
Quicker way to cool liquid
0
How cold does this ice have to be to freeze this water bottle solid?
4
Why did hot water squirt out of a squirt bottle when I placed it in cold water?
2
How long does it take to cool down a drink with ice?
2
Freeze water bottles during colder nights, and place them in front of a fan during warmer days?
6
Does adding cold water to evaporative air coolers actually produce colder air?