Which ball spins the longest?

I just thought of a mind-boggling question about angular velocity and friction.

Here is the picture: 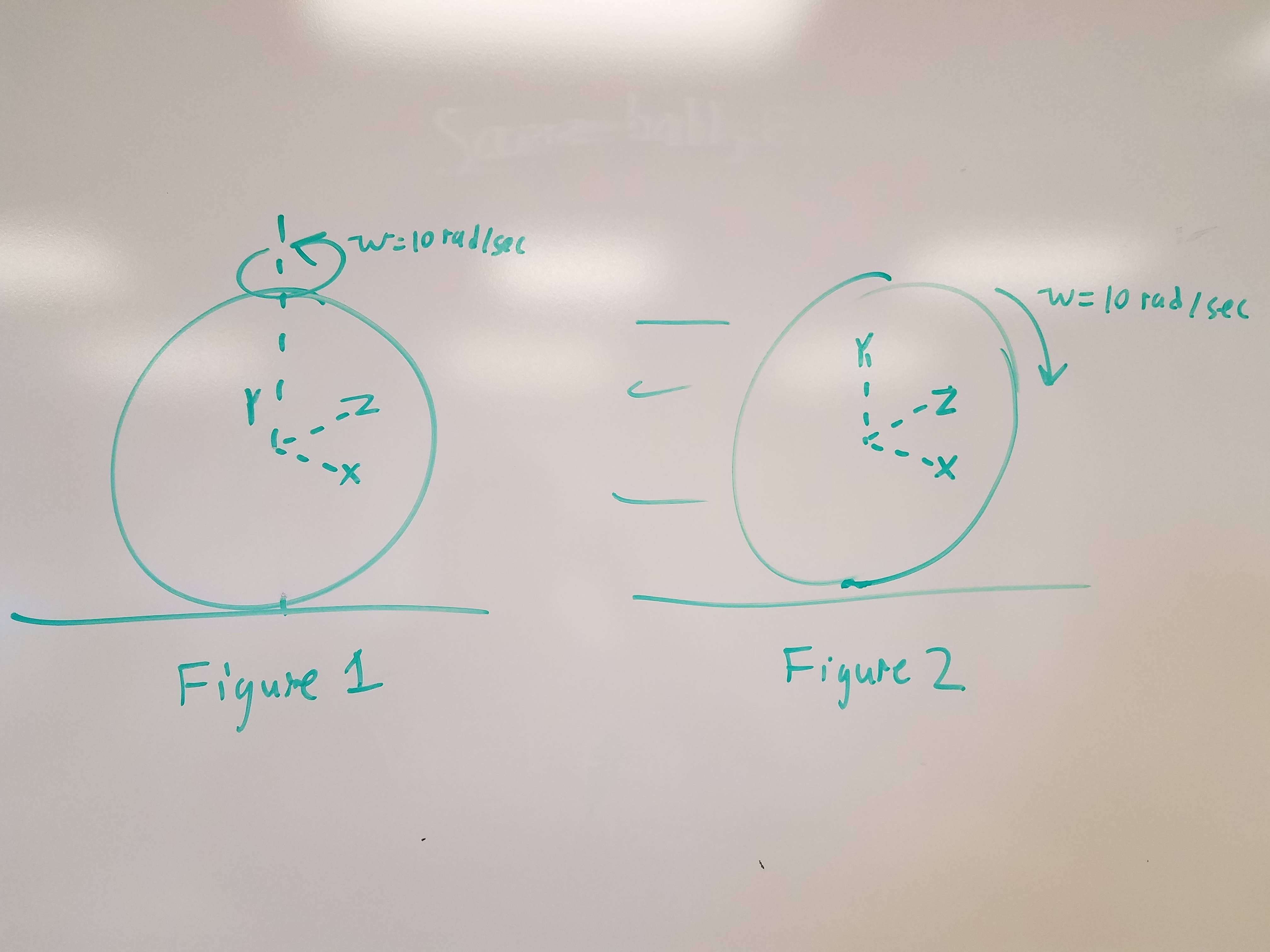 The first figure shows a ball spinning around the y-axis, and the seconds shows another ball that rotates about the z-axis.

In which figure would the ball spin the longest until its angular velocity will be zero radians/second?

The force of friction and gravity, the mass and the radius of the balls, and the initial angular velocity for both scenarios are the same. Both balls are on a flat surface. Assume air resistance is negligible. Assume the ball maintains a solid shape at all times.

Many of my friends say that it's the second figure. My physics teacher and I say they will stop in the same time. Who has right?

Note that the rolling ball has more kinetic energy than the spinning ball, because it has both angular and linear velocity, compared to just angular velocity. So, stopping the rolling ball requires more work than stopping the spinning ball. If the work per time done by friction is the same in both cases, it will take longer to stop the second ball. As it stands, I'm not 100% sure how to compare the friction forces involved in spinning vs. rolling, so if anyone can support their equivalency, it would improve this answer!

Let's focus on the second ball, the one rolling on the floor. If it rolls without slipping, then it will stop spinning when it comes to rest, or when its total momentum is zero.

How quickly does its total momentum decrease? Newton's 2nd law tells us the rate of change of momentum of an object is given by the total external force on the object.

The only thing that can stop a perfectly rigid rolling ball is air resistance. The second ball will roll forever, while the first ball will slow down for the obvious reasons.

Not the answer you're looking for? Browse other questions tagged homework-and-exercises energy rotational-dynamics energy-conservation friction or ask your own question.

0
How to calculate friction on a spinning ball on the ground?
0
Calculating the work done by friction on a rigid body due to the piston
2
Rotation of a system and conservation of angular momentum
0
Friction during ball backspin and overspin
11
Why doesn't friction accelerate a ball undergoing rolling?
0
Moving ball with rotation
1
Magnus effect -Direction of the resultant force experienced by the spinning ball
0
Torques on a spinning soccer ball
1
Why conservation of energy does not apply in this case?
2
Velocity of ball sliding on bowl. Need to understand why vertical velocity of bowl is 0 and ball is not