Question regarding the frequency of a cyclotron:

If you look at the derivation for the angular frequency it is as follows: 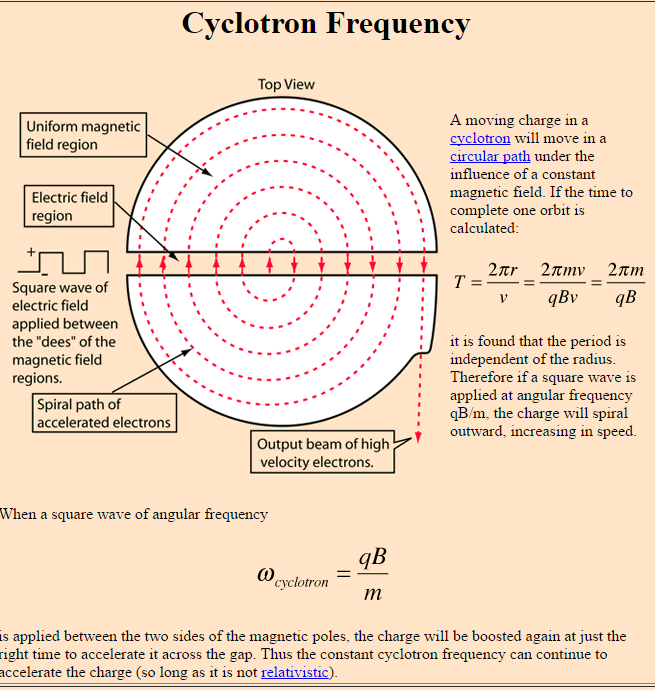 When looking at my notes it said that this frequency is also equal to that of the voltage (since the p.d must change directioons in order to keep accelerating the particle in its direction of motion)

Surely this angular frequency must be double this considering the voltage must change each time the particle makes a half turn, (rather than a complete revolution)

Any help would be appreciated

This means that if you just arbitrarily choose half #1 as "ground," you will see half #2 as a square wave going from $-\phi$ to $+\phi$, and returning to where it was after a period $T$. If you used $T/2$ as this square wave's period, as you're suggesting, then after spending $T/2$ in the one half, the electron has now flipped its direction, but the square wave must return back where it started (because that's what "period" means for cyclic things). This means that the electron must be now fighting against whatever voltage helped it out earlier, since the voltage gradient is the same but the electron's direction has changed. So you really need this period to be $T$ so that you get the "up" ($+\phi$) half of the square wave one way and the "down" ($-\phi$) half the other way.

Not the answer you're looking for? Browse other questions tagged electromagnetism magnetic-fields electric-fields voltage frequency or ask your own question.

0
“Off by one” phase difference errors in a cyclotron
4
Electromagnetic field and voltage drop in a circuit
13
Understanding voltage and power in the fluid analogy for DC circuits
5
What causes a harmonica note to drop in pitch (AKA bend)?
0
Amplitude change in SHM when velocity is changed
3
Loss of energy via EM waves by a charged particle in a uniform magnetic field
0
What is doing the work on a magnetic dipole in a magnetic field?