Why must the single slit in a double slit experiment be narrow?

I read that this causes contrast to become lost between dark and light fringes, but why?

The double slit experiment uses the fact that a single narrow slit diffracts light to create two coherent sources that will interfere. If the single slit wasn't narrow, there wouldn't be diffraction, and thus each of the two sources would only emit in a very narrow direction. In consequence, there wouldn't be any interference.

For the interference pattern to appear clearly it is necessary that $|\vec{r}|\sim\lambda$ to avoid excessive oscillations in the pattern. This is the reason for which the sepparation must be of the order of the wavelength being therefore, small.

With a light source like a laser the single slit is not necessary but the laser beam must be capable of illuminated both slits.

With a light source like a light bulb the single slit is necessary so that one can observe the interference pattern produced by the two slits.

The diagram below shows a single slit $AB$ which illuminates two slits $D$ and $E$. 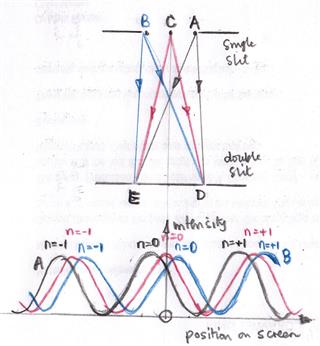 Light from the centre of the single slit $C$ travels equal distance to slits $D$ and $E$ and so the two slits act as sources which are in phase with one another and so produce an interference pattern , shown in red in the diagram, which is centre at position $0$ on the screen.

Light from edge $B$ of the slit travels different distances to slits $D$ and $E$ and so the two slits act as sources with the wave from each slit differing in phase with light from slit $E$ leading light from slit $D$.
This results in the interference pattern being displaced to the right of position $0$ on the screen which is shown in blue in the diagram.

There is a similar displacement pattern but in the opposite direction for the light coming from $A$ and is shown in grey in the diagram.

So from the whole of the single slit a series of displaced and overlapping interference patterns are produced.

If the difference in phase from different parts of the single slit can be kept below the equivalent of a fraction of a wavelength then the interference pattern should be visible.
This is achieved by having the central part of the central maximum of the diffraction pattern due to the single slit illuminating the two slits.

There are a number of related answers to your question which you may also care to read:
Answer 1
Answer 2
Answer 3

0
Why does the single slit in Young's Double slit experiment need to be narrow?
4
Why incoherent source of waves have to be passed though a single slit for double slit interference pattern to occur?
2
Why does moving the source-slit closer to the double-slit plane decrease the sharpness of the interference-pattern?
3
How light from a thermal source gets coherent behind a small hole?
0
fresnel biprism - why is the slit kept narrow? Any specific reason
1
What happens if you replace the first slit in Young's experiment by an extended source?
1
The function of the pinhole in the double slit experiment
-1
Single slit then double slit
0
Why is a point source required for observing perfect double slit interference?
0
Intensity graph for laser double-slit experiment?
see more linked questions…