How is work done by friction in rolling without slipping zero? [duplicate]

When a body say a cylinder of radius R rolls down an inclined plane without slipping why is there no work done by the force of friction?

In other answers that I have read they say that it is because the displacement is zero but thats not true because the point on the bottom is moving on a trochoid. So this is not a duplicate.

We can also do a different approach like say initially the point P is in contact with ground where friction acts then the force of friction f provides torque about centre of mass equal to RfX where x is angular displacement net of P which clearly is not always zero in some cases might be .

Work isn't just the force times the distance, it's the dot product of the vector force times the vector displacement, $$Work=\vec F \cdot \vec x$$ At the point of contact, the cylinder isn't sliding along the surface, so the only possible motion is perpendicular to the surface, and so the only possible motion at that point is perpendicular to the direction of the force.

In fact, the point on the edge is at rest, just for an instant. It's accelerating, so it doesn't stay at rest, but at the instant of contact the point is nonetheless at rest.

It's a little bit like how when something is thrown straight upwards that it's at rest for an instant at the top of its path. It doesn't stop dead, but it does stop for an instant while reversing its direction of motion.

The velocity of points on the the edge of a spinning disk go like. 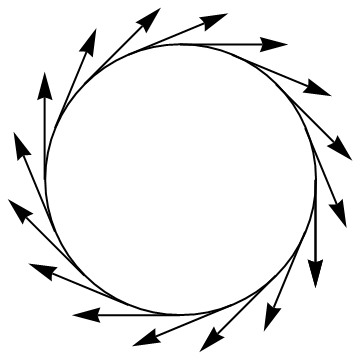 A rolling disk, on the other hand adds in the velocity vector for the motion of the center of mass. 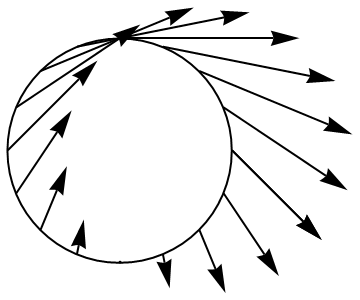 Edit: Here's the mathematical explanation for the motion of a point on the edge of a cylinder:

If we start with a spinning cylinder with a center of mass at rest we can describe a point on the outer surface of that cylinder by using a circle being swept out at a constant rate of rotation.

$$\vec x=r(cos(\omega t), -sin(\omega t)) $$ (The negative is because we are moving clockwise.) Taking the derivative, we get the velocity,

Not the answer you're looking for? Browse other questions tagged rotational-dynamics or ask your own question.

6
Is work done in rolling friction?