How does in an expanding universe the equilibrium number density change with temperature?

How is this possible? Shouldn't the rate of forward and backward reaction be equal in chemical equilibrium? And if that is so, how can the number density of A change with the fall of temperature?

I think the italic statement above is true only for a given temperature. If yes, does that explain how the number density deplete in equilibrium?

thermodynamics cosmology astrophysics universe equilibrium
Share
Improve this question
edited May 7 '17 at 15:20
SRS
asked May 4 '17 at 7:44

You are mixing up two eras in cosmology.

At young age the universe was incredibly hot such that reactions (i.e. $A\rightarrow B+C$) were indeed in thermal equilibrium since $kT >> m_A, m_B, m_C$ there was no preferred direction for this reaction to move into !

The result is that the number densities of the particles are determined by a thermal distribution:

With the +(-) sign for fermions (bosons). From this we get that the number densities before freeze-out were given by:

Those are the relations that you mentioned.

As time passes and the universe cools there will be a point a which particles are no longer able to maintain this thermal equilibrium since $A\rightarrow B+C$ wil drop out of equilibrium !$(let's say $m(B)+m(C) < m(A)$ such that A will decay.

At this point the relations are no longer valid since there will be less A particles as expected. And more B,C type particles.

This is depicted in the figure below. At early times T is high and the number densities are given by the formulas above, this is depicted by the solid black line. As T drops we observe that the effective particle densities are higher than those expected from the equilibrium calculations (i.e. B or C type particles in our above example).

Note that the final density depends on the crossection of the decay, this is sensible since a higher crossection means that the reaction will remain in equilibrium for longer such that it will follow the full curve for longer. 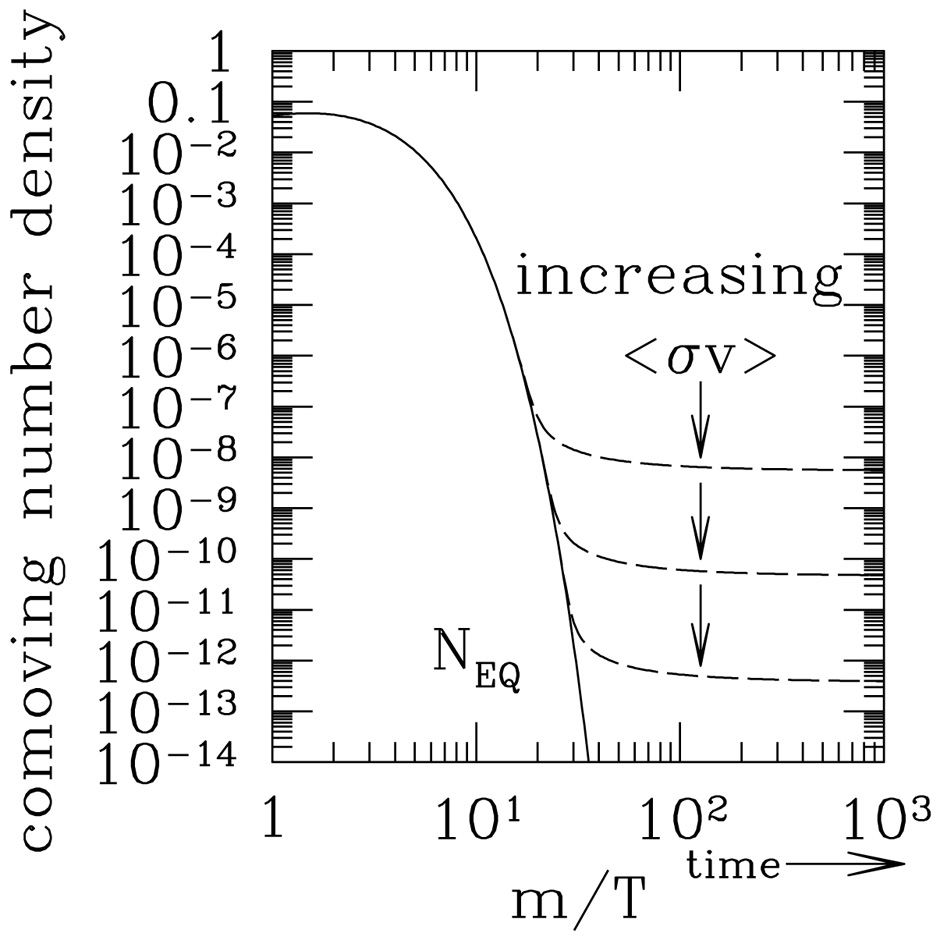 Yes, you are right! The statement "The rate of forward and backward reaction is equal in equilibrium" is only true at a given temperature.

So we can use equilibrium statistical mechanics to determine the statistical properties of the particles from the temperature, as long as the relevant interaction rates are much larger than than the expansion rate.

Not the answer you're looking for? Browse other questions tagged thermodynamics cosmology astrophysics universe equilibrium or ask your own question.