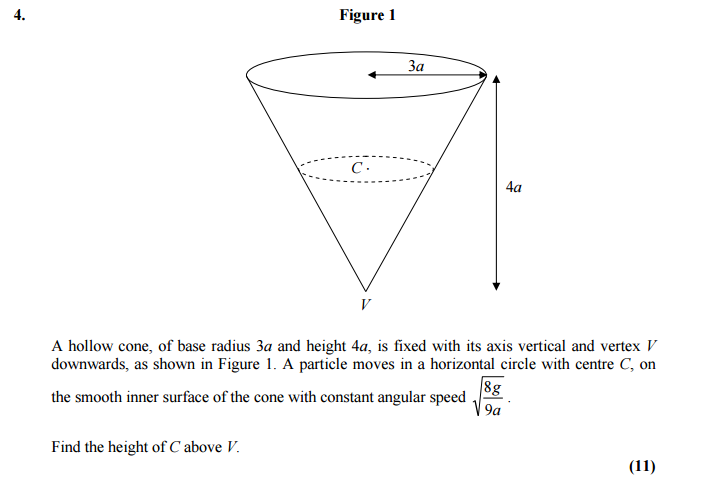 Normally, if an object of mass $m$ is inclined to the horizontal at an angle $b$, we set the reaction force of the object on the inclined plane as $R = mg\cos{b}$ (if we resolve the force of gravity so the line of action coming out of the plane is perpendicular to it).

However in circular motion*. it's assumed that $R\cos{b} = mg$. In the example above, one would have to do this in order to arrive to the correct answer, instead of $R = mg\cos{b}$. Using $R = mg\cos{b}$ seems natural enough, as I am resolving vertically, however, both equations would produce two different values for $R$. Why is this?

Whereas If we use $R\cos{b} = mg$, $R = mg\sec{b}$ and the centripetal force will be $mg\sec{b}\sin{b} = mg\tan{b}$. This will end up with two different values for the radius of the circular motion, and hence two different final answers.

*In the circular motion questions I've seen in my mechanics module

Either way, you'll arrive at an answer. But the text of the question presupposes that you can just memorize a formula for a situation. Never do this, look at a situation, and work out the answer. You will end up wrong as often as you don't if you try and solve problems the way you seem to be -- because all it takes to be wrong is someone labeling an angle in a funny way, or using a slightly different convention.

@JerrySchirmer's advice is generally good, and worth heeding. If you actually construct the free-body diagrams for a particle on an inclined plane and your particle on a cone, you will note the following important difference:

In both cases, you can then use the fact that the particle is not accelerating in the "other" direction (perpendicular to the plane for the incline; vertically for the cone) to write down a relation between the particle's weight and the reaction force. But these respective equations deal with the components of those forces in different directions, and so they turn out differently from each other.

First, let's look at the difference between two scenarios:

Case 1: A box is standing still on an incline. In this case, the type of motion we are trying to oppose is the box sliding down the incline, i.e. the effect of gravity force on the box. Don't split up the weight into parallel and perpendicular components yet. Draw the normal force and the friction force. Then draw their sum. You can see that their sum is vertical, opposite the direction of the gravity force on the box. If this sum is sufficiently large, it will fully counter the gravity force in the box and prevent it from sliding up or down.

Case 2: A car is moving around a banked road/race track, with no friction (coefficient of friction = 0). In this case, the types of motion we are trying to oppose is:

Again, draw the weight/gravity force on the car without separating it into its components. A vertical force (or vertical sum of forces) in the opposite direction needs to counter this force. What's touching the car (on the outside)? Just the road under it! And there's no friction, so the vertical force can only be the vertical (y) component of the normal force/the force supplied by the road on the car. But we still need a horizontal centripetal force to keep the car in a circular path! Again, the only thing that can supply this horizontal force is the normal force/the road's force on the car. So the normal force must have a horizontal component that provides the necessary centripetal force.

Hopefully, you can see the difference between these two scenarios.

Now let's derive the respective formulas for each of these scenarios.

Case 2: Draw the vector representing the weight of the car (not its components). In this case, we have no friction, so all of the weight of the car (not just the perpendicular component) must be countered by the vertical component of the normal force alone. Thus F_n,y = mg. Using simple geometry, we can find that the angle between the net normal force (by definition, perpendicular to the road) and its vertical component is equal to theta, the angle of the incline. Thus, F_n = mg/cos(theta).

I hope this helps! I was stuck on this too for a while, and I decided I'd jot down the thinking process I went through to clear things up for myself. :)

Not the answer you're looking for? Browse other questions tagged homework-and-exercises newtonian-mechanics kinematics vectors rotational-kinematics or ask your own question.

0
How come $N \cos \theta=W$ if $N=W \cos \theta$ for the motion on a banked road?
1
Physical reason of difference between normal force in a banked curve and an inclined plane.
0
$mg\cos\theta=N$ or $N\cos\theta=mg$
0
How to make FBD in a vertical circle and a banked road?
12
Why do I get two results from a single free body diagram?
0
$N=mg\cos\theta$ or $N=\frac{mg}{\cos\theta-\mu_s\sin\theta}$?
0
Why doesn't a car moving on a curved path have a horizontal gravity force but it has a horizontal normal force?
-1
Why do I get inconsistent equations when I resolve forces vertically and perpendicular to the plane?

0
What is going on in the system? How are the formulas $mg \sin(x)$ and $mg \cos(x)$ derived?
0
Why resolve some forces into components and not others?
1
Normal Force in Circular Motion
0
Why don't we resolve $mg$ i.e. weight while solving problems related to banking of road in Circular motion?
1
Pendulum Circular Motion query
1
The direction of the centripetal force in a vertical circular motion under uniform gravity
0
Position vector for free fall along an inclined plane