How and why would a glass table break in this manner?

Recently, a relative of mine came to me asking me to explain a strange physics phenomenon. She had 3 glass tables; 2 small and one large arranged neatly such that the small tables were half enclosed under the larger one. She recounted to me that one morning she was sitting in a room adjacent to the one with the tables (but one which allowed her a full view of the tables) with nobody else in the house at the time, when all of a sudden and without any prior indication, one of the smaller glass tables exploded. Not simply shattered, but exploded with a loud pop or bang, sending pieces across the room (thankfully no one was nearby to get hit by flying glass shards).

Naturally, I was a bit skeptical and asked if she was exaggerating slightly and if she had pictures of the resulting debris. She did have pictures and she was not exaggerating. 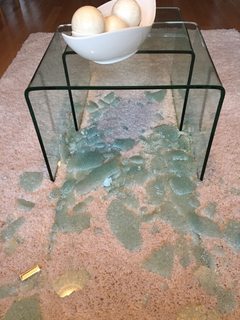 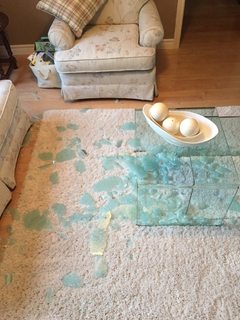 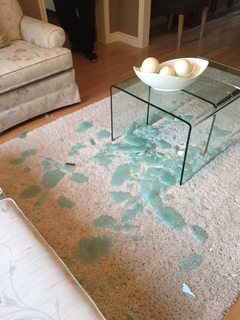 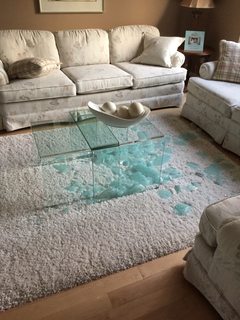 I had a few ideas how this happened off the top of my head, but this is something I've definitely never seen before. She had this table for at least 4 years before it shattered, but I don't think she's had it more than 10. As you can see, the light is shining through the window onto the tables, but judging by the sharpness of the shadows, I'd say it wasn't particularly warm light (likely a partly cloudy day).

Now, I'm aware that thermal stresses can cause glass to fracture or break, but there were apparently no prior indications of problems, the glass did a bit more than simply fracture or break apart, and I am unsure if the environmental conditions were enough to cause that kind of thermal variation. Discussions in the comments seem to have rested on the notion that this is likely safety glass, which has higher internal pre-stresses and can be known to explode when those stresses get too high (there can be multiple causes of this, however, and an ideal answer should explain the most likely, let's say, 2).

So my main question is what would cause the glass table to spontaneously explode?

Potential answerers might want to start on the wikipedia page for Spontaneous glass breakage. However, that was a bit insufficient an explanation for me, so consider being more thorough (math, diagrams, etc is all welcome).

So let's say we find an answer about why this thing broke. From what research I've done, it seems more common for spontaneous breakage to mean spontaneous shattering, not an explosion like this (unless it has a very significant thermal variation that causes high internal pressure, but with another table over top and what looks like less than peak sunlight, I fail to see how that much thermal stress could be applied here. Feel free to correct me though). Thus, my secondary question: Rather than simple fracturing or shattering, why would this cast projectile debris so far? What kind of internal pressure must have built up?

I'm fairly sure I know the reasoning myself, but I'm not entirely certain. It'd be good to get a more sound answer from others. In the meantime, I did tell her to replace all the glass tables, just in case the others had similar defects, and to look for the ones that say "Now with less explosions than ever" as opposed to the ones that say "Start your day off with a bang".

Tempered glass is usually safer than other glass, because when it breaks, it usually shatters into small pieces, instead of large, sharp pieces. It's required to be used in car windows and shower and other glass doors.

However, experts say, because of the way tempered glass is made, it's essentially under high pressure, and the smallest nick or scratch can cause it to suddenly shatter. Manufacturing problems, such as compromised quality, or something as simple as a sudden temperature change can also cause a spontaneous shatter.

As crystal glasses can break from sound maybe sound can also start the shatter? small part may vibrate to breaking point.

Not the answer you're looking for? Browse other questions tagged everyday-life material-science explosions applied-physics glass or ask your own question.

-1
Why did my recently cleaned glass break?

1
Glass Hardness and Pressure
3
Exploding planets and entropy
3
Why glass always breaks into sharp pieces?
2
Why would/do you wet glass after scoring it to break it?
0
Can we distinguish how an object was warmed up?
0
Metal vs Cardboard: which liner for a solar oven would allow it to reach a higher temperature, and why?