What is the connection between the refractive index of a material and its transparency?

From my understanding, refractive index is an indication as to how the speed of light changes when it passes through a material. However a professor has asked me how would I determine whether or not an object is transparent or not, simply by being given the refractive index (n) of light before and entering the object.

Is it as simple as saying that if n=0 after passing through the object, then it is not transparent? Therefore are most objects transparent to some degree?

With the Fresnel Equations you can calculate how much of the light is reflected:

So the transmitted part is:

As $v$ is the phase velocity (not the group velocity), then you could have $v>c$ without violating special relativity, and as a consequence, refractive indexes can be below of $1$, but only with this we cannot relate it with the transparency of the medium.

You have to use transmitance ($T$) and reflectance ($R$). Quickly said, those quantities are the porcentage of light that is transmitted and reflected, respectively, so $R+T=1$.

You can observe that reflectivity changes with $n$, and that if your refractive index is very small (if $n \approx 0$) or very big (if $n \rightarrow +\infty$), then reflectivity is $R \approx 1$ so you have an almost opaque medium.

On the other hand, you will have an almost perfect transparent medium when $R$ is minimum, which happens when $n \approx 1$.

This thread from 2013 doesn't exactly answer your question, but it is relevant and I think you will find it helpful:

Why are so many different types of objects white, yet appear gray when they are wet?

Specifically the answer given by Carlos on Sep 16 '13 at 12:40 regarding the appearance of salt grains.

Firstly, the refractive index is not the only factor that sets transparency or otherwise. Witness the examples of sheet ice and snow: a material's internal structure is also a strong factor.

So, it's clear we should concentrate on materials that are either crystalline or otherwise optically homogeneous.

Given you're a third year student, I think your professor may be angling for the Kramers-Kronig relationships. These are integral (Hilbert-transform) relationships between the real (absorption per unit propagation distance) and imaginary (phase per unit propagation distance, i.e. refractive index) parts of the complex propagation constant for a plane wave in a material. If $n(\omega)$ is the refractive index as a function of frequency $\omega$ and $\alpha(\omega)$ the absorption, then:

These integral transform are also known as the Hilbert transform and its inverse. The slashed integral stands for "Cauchy Principal Value".

Notice that they mix the refractive indices over the whole frequency range to compute the value of $\alpha$. So, for their accurate application, the KK relationships require that we know $n(\omega)$ over the whole range of frequencies where they are nonzero.

Below is shown a typical result of the above equations. The green curve shows a triangular absorption as a function of frequency, with frequency along the horizontal axis (actually, it is gain in a Raman amplifier, but the same principle applies). The phase of the amplifier, proportional to an effective refractive index for our purposes, is the blue curve. I emphasize yet again that the KK relationships only determine absorption / refractive index to within an arbitrary additive constant, so that's why the blue curve has both positive and negative values - it can be added to any constant refractive index and still be valid. This arbitrary constant is also why a single refractive index says nothing about absorption. 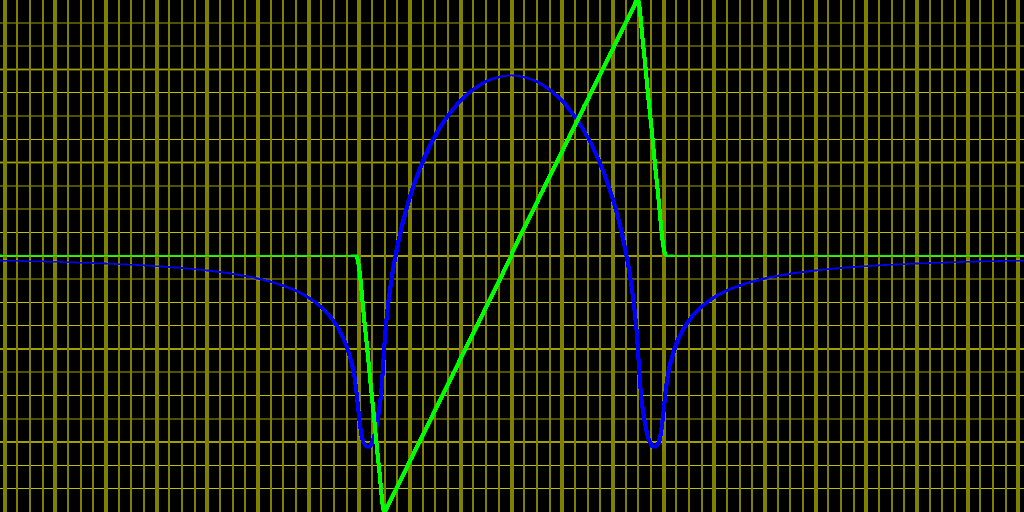 The KK relationships derive from stability considerations. Consider the Laplace transfer function $H(s) = H(i\,\omega)$ relating the output to input time variation of a plane wave. In a passive medium, it cannot have poles in the right half plane - otherwise these would correspond to boundlessly exponentially growing waves in the output. Nor can it have zeros anywhere: no finite thickness slab of material cannot absorb electromagnetic radiation at any complex frequency perfectly (although practically it can do a pretty good job).

Then $\alpha(s)+i\,n(s)\propto \log H(s)$ must be analytic in the right half plane. By the transformation $s\mapsto i\,s$, rotate the complex plane through a quarter turn so that frequencies $\omega$ are along the real axis, and $\alpha(\omega)+i\,n(\omega)$ must be holomorphic in the upper half plane and moreover are bounded as $\omega\to\infty$.

Under these conditions, it follows immediately that the real part must define the imaginary part, modulo a constant, and contrariwise. For suppose that there were two analytic functions $\alpha_1(\omega)+i\,n(\omega)$ and $\alpha_2(\omega) + i\,n(\omega)$ with the same imaginary part on the real axis, which are holomorphic in the closed lower half plane and which are also bounded as $\omega\to\infty$. The difference is then real on the real axis. Then, by the Schwarz Reflexion Theorem](https://en.wikipedia.org/wiki/Schwarz_reflection_principle) and uniqueness of analytic continuation, the difference must be holomorphic in the closed upper half plane too, but the difference is also bounded, hence, by Liouville's Theorem, i.e. that every bounded entire function is a constant, the real parts can only differ by a constant.

Here ends the elegance, but we know there must be a precise relationship, modulo a constant. Fiddly contour integral methods will get you the actual Hilbert transform formulas - the Wikipedia Kramers-Kronig Relationships page sketches the calculation. But I like the idea of proving there must be a unique relationship with clear and simple holomorphic function theory concepts before losing one's thoughts in calculations that people like me always get wrong anyway.

Not the answer you're looking for? Browse other questions tagged optics material-science refraction optical-materials or ask your own question.

71
Why is water clear?
18
Why are so many different types of objects white, yet appear gray when they are wet?
10
Can the Kramers–Kronig relation be used to correct transfer function measurements?
2
Phase velocity greater then the speed of light?