How can a car accelerate with the same force (i.e. friction) which also causes it to slow down. If there is no friction, a car cannot accelerate?

Your thinking and question is good. The issue is that you seem to have misunderstood, which friction is actually present.

Both have a direction that counteracts sliding. Note that the latter is only a maximum formula - the value could be anything from 0 up to this value, so it is not very useful unless you know that you have the limiting case.

When an object slides over the road, we see kinetic friction. But a car doesn't slide. It's wheels roll. At the point of contact with the ground they are in fact exactly stationary. They don't slide. No kinetic friction. They stand still in that very point like the table you are pushing not hard enough to move.

Now to the specific situation of a car driving uphill:

Think about a car starting from rest on the flat.
To do that the frictional force on the tyre due to the ground must be in the forward direction.
The reason is that when the wheel is made to rotate by the motor the tyre will start slipping relative to the ground and the friction force will try and reduce this relative motion between the tyre and the ground by moving the car forward.
For no slipping the translational acceleration of the wheel $a$ must equal $r\alpha$ where $r$ is the radius of the tyre and $r$ is the radius of the wheel.
The static frictional force is responsible for these accelerations.

Kinetic friction forces will try and reduce the relative motion between between two surface. 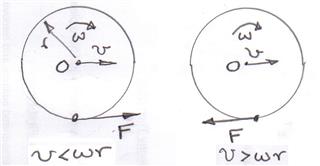 In the left hand picture imagine that the the rotational speed of the wheel $\omega$ is too fast or the translation speed is insufficient so that there is slipping between the tyre and the ground.

So the frictional force on the wheel due to the ground does two things to try and reduce the relative movement between the tyre and the ground.

Both of these effects then making the wheel move closer to the no slipping condition $v = r \omega$.

When your wheel is powered by the engine the wheel pushes backward and reactionary friction force opposing this pushes your car forward.Same as the case when we walk.The feet push backwards and the reactionary frictional force pushes us forward.The friction is in a direction opposite to the direction we are pushing in and in the direction we want to move. When the car is moving without powering the wheel the wheel is not pushing back but is simply rolling forward and the frictional force develops accordingly to oppose this.

I think the misconception that arises is frictional force doesn't opposes the motion of a body but in deeper sense it opposes relative motion between two surfaces in contact which are different things. Hope it solves your problem.

16
Is there any friction between wheel and road?

7
Simple friction formula for a car
3
Static Friction in Free Body Diagram (FBD) of Car parked on Incline
8
Friction as a Centripetal Force
4
Friction of a Car in Motion
1
car descending at Constant speed
1
Law of friction violated?
0
Friction and Motion
0
Friction and Circular Motion
1
Forces acting while running