I was curious about how relativity might affect how our eyes perceive an expanding star. With regard to the angular diameter, my current understanding is as follows: from an inertial frame's perspective, the top and bottom of a sphere are moving perpendicularly, and hence the angular diameter's rate of change is determined by the velocity transformation in the perpendicular direction. However, light rays enter our eyes at an angle. Will this affect our eyes' perceptions of the angular diameter? Similarly, how will this affect our perception of the star's shape? Please help me clear my doubts, thank you!

special-relativity classical-mechanics astrophysics astronomy
share|cite|improve this question
asked May 2 '17 at 2:37

This problem appears to be treated nicely by Rees (1966) in the context of an expanding spherical source at the centre of an active galactic nucleus.

I reproduce the main figure from this paper below. It shows the apparent surface of the expanding object (S, in this case a star) as viewed by a distant observer O. i.e This is the locus from which an observer would see the emitted light at some instant of the observer's time. The visible part of the star is marked in bold on the diagram. 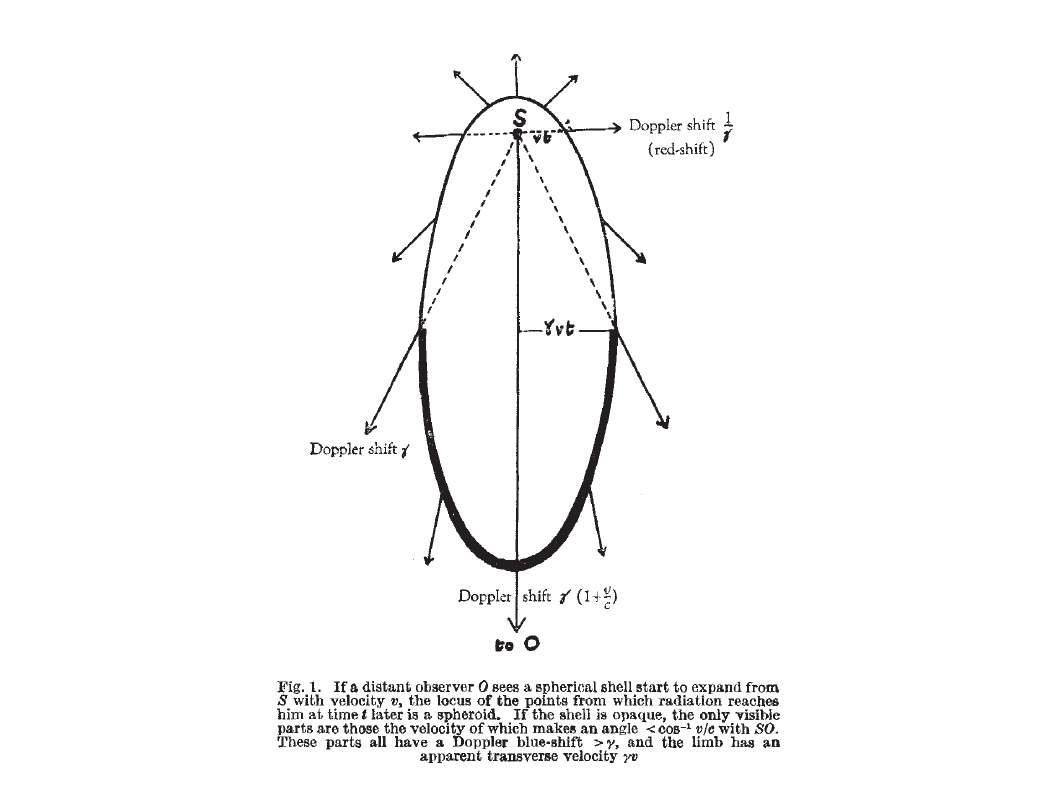 The key points are that the apparent surface (which obviously can't all be "seen" by the observer) is distorted into a spheroid with the centre of the star at one focus. The angular size of the source is given by the visible diameter of $2\gamma v t$, where $\gamma$ is the usual Lorentz factor, divided by the distance to the observer. The surface moving at angles between $\pi/2$ and $\cos^{-1} (v/c)$ to the observer is actually not visible.

So at any given time, the relativistically expanding star appears bigger (in terms of angular extent) than a non-relativistic treatment by a factor of $\gamma$.

That means that if $v > c/\gamma$ (which equates to $v > c/\sqrt{2}$), that the motion can appear superluminal. This is a well known phenomenon seen in rapidly expanding shells or jets from astronomical sources.

Not the answer you're looking for? Browse other questions tagged special-relativity classical-mechanics astrophysics astronomy or ask your own question.

6
How to measure the diameter of a star?
3
Navigating to a distant star
0
Temperature, redshift or true colour of a star?
1
Can a star reflect light from another star? (Enough for it to be visible)