"One may also regard the gauge potential as a connection on an $SU(2)$ bundle over $\mathbb{S}^4$, with field strength $F$. The fact that we can equally well regard the action as defined on $\mathbb{S}^4$ or $\mathbb{R}^4$ is because it is conformally invariant, so the field equation is the same in either case."

Through stereographic projection $\mathbb R^n$ can be mapped to $S^n$ minus a point. If $\mathbb R^n$ is compactified by including a "point at infinity", the map is to the whole of $S^n$.

The following is for $\mathbb R^2$ and $S^2$ because they are easier to draw, but it generalizes to $\mathbb R^n$ and $S^n$ if you write out the transformations.

Put a 2-sphere in Euclidean 3-space with its "south pole" at the origin and let the tangent plane at this point be the $xy$-plane. For each point $P$ in the $xy$-plane, draw a line from $P$ to the north pole of the sphere (image from Wikimedia Commons): 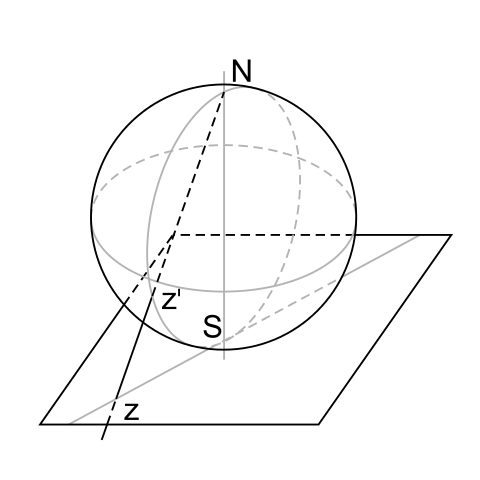 One can show that this mapping is conformal, i.e., it preserves angles. Thus for any conformally invariant equation (i.e., it depends only on angles between vectors) we can view it equally well as an equation on $\mathbb R^n$ or on $S^n$.

The "point at infinity" can throw a wrench into this because one typically has some boundary conditions at infinity for the $\mathbb R^n$-theory and one needs to consider how to transfer these to the $S^n$ theory. This can depend on the topology of the solutions, but I'm sure that's what your book will teach you about.

Not the answer you're looking for? Browse other questions tagged gauge-theory conformal-field-theory topology topological-field-theory solitons or ask your own question.