Current at steady state through inductor

In the following circuit , the AC source is an ideal voltage source$(V\sin \omega t)$ . I/ my book it is written that the amplitude of steady state current through the inductor at resonance is $V\sqrt{C/L}$ 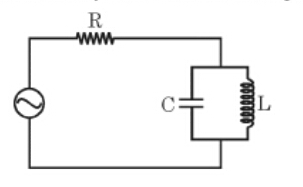 But it should be either V/R as at steady state the resistance of inductor is zero .

At resonance, the $LC$ resonator in that circuit behaves as an open circuit, not a short one (it's a parallel resonator, not a series one).

In fact, the admittance of the $LC$ resonator is

The impedance is thus infinite, no current crosses the resistor and the voltage across the $LC$ resonator is $V$. At resonance, the magnitude of the current through the inductor is then $V/(\omega_0L) = V\sqrt{C/L}$.

I would like to address two misconceptions in your question:

But it should be either V/R as at steady state the resistance of inductor is zero .

The energy stored in the LC circuit 'sloshes' back and forth between all electrostatic energy (zero current, maximum voltage) and all magnetic energy (maximum current, zero voltage).

In order to have the resonance we should have w=1/(LC)^(0,5) because we need to have the smallest value for the impedance Z.

Not the answer you're looking for? Browse other questions tagged electric-circuits electrical-resistance capacitance resonance inductance or ask your own question.

0
Questions about the formula used to determine inductive reactance and $Z_t$
0
In an RLC series circuit on resonance, how can the voltages over the capacitor and the inductor be larger than the source voltage?
1
Question about the negative resistance and the negative reactance
2
Phase Locking in Parallel RLC at Resonance Frequency
4
Inductor and Capacitor in Parallel
0
Why is the information of a time delay missing in formulae of voltage drop across elements when we emulate DC with an AC voltage supply?