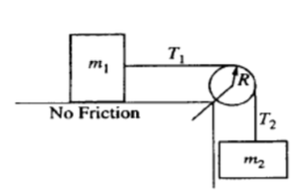 What I'm having trouble understanding is why the torque produced by $m_2$ is simply $T$$_2$R. $m_2$ is accelerating downwards. Wouldn't the free body diagram of $m_2$ be $mg$ pointing downwards and $T_2$ pointing upwards? Thus, shouldn't the net force acting on the block be equal to $mg - T_2$, and consequently, the torque caused by $m_2$ be equal to $R(m_2g - T_2)$? Why are we allowed to ignore the weight of the block?

$T_2$ has all the relevant information in it. It and $T_1$ are the only forces actually acting on the Pulley, $T_2$ will have some dependence on $m_2$, but since the question defines a tension force acting from the weight to the pulley for you, there's no reason to not just use that.

The forces which act directly on the pulley are the tensions $T_1, T_2$ in the string. The string transmits these forces between the blocks and the pulley. The weight of the block does not itself act on the pulley, so we ignore it when considering the forces on the pulley.

The weight of the block is not being ignored altogether. It affects the value of $T_2$. We take account of it when we look at the block as a free body and write an equation of motion for it : $m_2g-T_2=m_2a$.

The fact that the string is inextensible and does not slip against the pulley also relates the accelerations $a$ of $m_2$ and $m_1$ to the angular acceleration $\alpha$ of the pulley.

0
Confusion in connected pulleys problem
7
Why does the tension on the pulley in an Atwood machine not equal $(m_1 + m_2)g$?
0
Newtons third law and Atwood Machines, confusion about tension
0
Pseudo force/negative acceleration
14
Deceptively simple mass-spring problem?
0
Tension and Angular Momentum Equilibrium (Exercise)
0
How do I solve this block-string system problem?